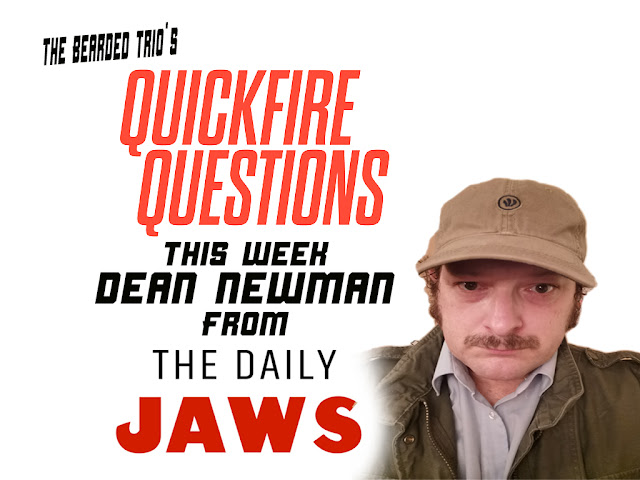 This week on our 'Quick Fire Questions' we are sticking with the number one Jaws website, The Daily Jaws.  Dean Newman is our guest this week.

Dean is Chief Writer at The Daily Jaws and writes his own film blog, Admit One, and previously wrote for Syfy. He’s always been a huge film and Spielberg fan, keen soundtrack and movie poster collector and is a budding script writer.

Are you ready, Dean?  Then release the questions:

You're stuck in a swamp on Dagobah (Star Wars). What one movie, TV show, album and book would you take?
Jaws, The X-Files, The score to The Rock by Hans Zimmer (a fantastic soundtrack - Rob) and others, Catch 22 by Joseph Heller

If you could invite any three people (alive or not, fictitious or not) to a dinner party, who would they be?
Robert Shaw, Harold Lloyd and my mum.

What is your favourite John Williams soundtrack?
Flits between Jaws, Jaws 2 and JFK

If you were invisible for a day what would be the first thing you would do?
Spend the day on the Universal back-lot.

When was the last time you cried because of a movie or TV show?
Listening to Ennio Morricone on the day his death was announced, the love theme from Cinema Paradiso or the death theme from The Untouchables.

What is your biggest fear?
Swimming in the sea (I can't imagine why!)

Excluding search engines, what three website would you choose if no other websites were available?
The Daily Jaws, IMDB and eBay

Do you have any movie/TV guilty pleasures?
Jaws 3D, Jaws The Revenge, The Parallax View, Event Horizon and Roger Moore James Bond films. On TV it would be Blake's Seven and Quantum Leap. Let's be clear though, these are just pleasures. No guilt exists.

What are you looking forward to the most in the next six months?
Seeing my dad again - not seen him since January - doing lots of reading, some script-writing and watching films I've not seen in a while. Celebrating 45 years since Jaws opened in the UK on Boxing Day 1975.

What is your most treasured possession?
My linen backed original quad Jaws poster from 1975 or my Jaws LP signed by Peter Benchley and John Williams.

What is your biggest regret?
Missing Steven Spielberg at a fashion show after party I was covering in New York.

What are you most proud of?
My daughter, Isabelle. The Daily Jaws wise, it would have to be the JawsWeMake, a fan-made recreation of Jaws in lock down. Your grass looks lovely in the opening credits BTW.

If you play video games, what was your most memorable video gaming moment?
Completing GoldenEye on the N64, the first game I ever finished.

What is your favourite Spielberg movie?
Jaws (Surprising! - Rob)

Thanks, Dean for the answers.  If you love the movie, Jaws then you must visit their website, The Daily Jaws.  Is really is the number one Jaws website in the world.  Not a bad record for this vicinity.

Next time on our Quick Fire Questions we have Tom Gross from Coffee With Kenobi.