DAN'S DELIBERATION: THE CONS THAT COULD HAVE BEEN 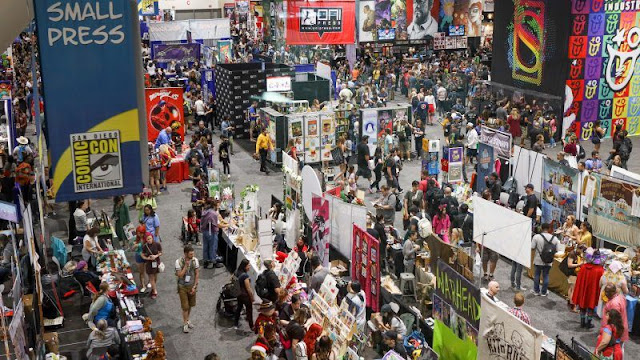 This coming weekend was to have been Wizard World in Chicago. A pop-culture con that has appearances from celebrities in the film, television, and comic book world. This year I was going just to meet Emily Swallow, who portrays the Armorer in “The Mandalorian”. But COVID-19 pushed that convention back until June of 2021. Who knows if any of the attending guest list they already had will be able to make the new dates?

Of course, next weekend was when Star Wars Celebration 2020 was to have taken place. I know my wallet and bank account are quite pleased with my being able to stay home during this time, and thinking about it myself, I’m glad I’m not having to risk my health to attend said events. I heard someone say that conventions won’t be returning to normal until 2022! So, IF cons are to take place next year, and IF a cure or vaccine for COVID isn’t available yet, what does everyone think cons would/should look like?

My own opinion on this is that ticket sales would have to decrease, and convention space would have to increase. Think of the last con you went to and just picture the vendors area, now imagine what it would look like if each of the vendor’s booths had to be 6ft apart from each other…ON ALL SIDES! The same would have to be said for the artists area as well. What about the autograph and photo-op lines? It would be quite an interesting sight indeed. Plus, how many people would even want to attend? For me, my biggest fear would be the flights. There have been times I had flown (pre-pandemic) and the air inside the plane is so dry, but the time I disembarked at my destination, I had a full-blown sinus infection to contend with!

There was a convention in Indianapolis in July that actually went ahead, and from what I’ve heard everything went well. So well in fact that they have scheduled another one to take place over Halloween weekend. I was planning on going to the con in July as they had all 6 of the actual “Knights of Ren” appearing there. However, due to the travel restrictions in place at the time for people flying in from overseas they had to cancel, and there went my reason for going. This is a convention that travels around the country throughout the year, with stops in Atlanta, Las Vegas, and Chicago. The Chicago show is scheduled to be in Nov, the weekend before Thanksgiving IF it does go on, but as of writing this, there are currently no celebrities attending that make it a “need to go” for me.

The only other convention I still have tickets for in 2020 that has not been cancelled or postponed is Empire Con LA in December. In my opinion, it’s the greatest Star Wars convention…that almost no one has ever heard of. I’ll talk more about that show in greater detail next time.