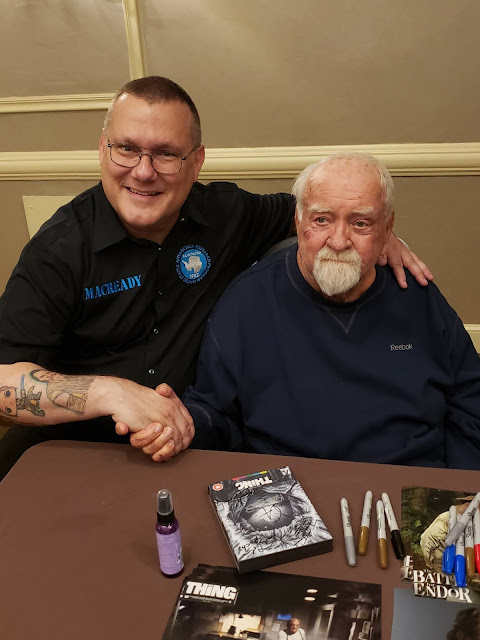 Sad news as we discover the actor, Wilford Brimley has passed away at the age of 85.  Brimley will be best known for his roles in the movie, Cocoon and the 1982 horror classic, The Thing.  Later in his life, Brimley was also known for his public advocacy of diabetes education.

His manager, Lynda Benksy said: “Wilford Brimley was a man you could trust. He said what he meant and he meant what he said. He had a tough exterior and a tender heart. I’m sad that I will no longer get to hear my friend’s wonderful stories. He was one of a kind.”

Brimley had been on dialysis and had other medical issues and was in the ICU in St. George, Utah ahead of his death. He had lived since 2004 on a ranch in Greybull, Wyo.

Sad news to hear the passing of Wilford Brimley and our thoughts are with his family and friends during these difficult times.

Contributor to the site, Dan Dudych remembers meeting Wilford Brimley and wanted to share his experience:

I've seen the sad news on social media that Wilford Brimley has passed away at the age of 85.  Star Wars fans know him for playing “Noa” in the 1985 made-for-television film “Ewoks: The Battle for Endor”. But I always loved him as Dr. Blair in John Carpenter’s “The Thing”.  The cast of the 1982 film consists primarily of twelve men, and as of 2019, three of them were, unfortunately already deceased. I had put it on my “bucket list” to meet the remaining cast members whenever they showed up at a convention.

It just so happened that there was a convention going on Aug 2-4th 2019 and four of the actors from “The Thing” were scheduled to attend, Wilford being one of them. Now this wasn’t a large convention, and there were only the four actors from this film and two from “Aliens” that I wanted to meet. My plan was to fly out Friday, go to the convention on Saturday, then fly home Sunday. But the convention was in Williamsburg, VA. and there were no direct flights from O’Hare to Williamsburg, so I had to fly into Charlotte, NC., I believe, then fly from there to Williamsburg. The day I was scheduled to leave, I got a text stating my flight from Charlotte to Williamsburg was cancelled, and they were looking at other options for me. I ended up having to fly from O’Hare to Charlotte, then fly into Norfolk, then take an Uber the last 45 miles into Williamsburg. The time for my flight out of O’Hare kept changing, so by the time the driver dropped me off at my hotel, it was already after 2am there.  A busy day!

When I got down to the convention floor Sat morning, I saw the sign they had posted stating that Wilford Brimley was not feeling well and wouldn’t be attending the convention until Sunday, but I was only in town for the day! Since he was staying in the hotel that was hosting the convention, he was able to sign some 8x10’s in his room and had them brought down to sell, so I was able to pick up one from “The Thing” and one from “Star Wars”. As my luck would have it, he was feeling better later in the afternoon, was able to come down, sit as his table for a bit, & that’s when I got my picture with him.