7 Movies That Are Instantly Recognisable Thanks To John Williams 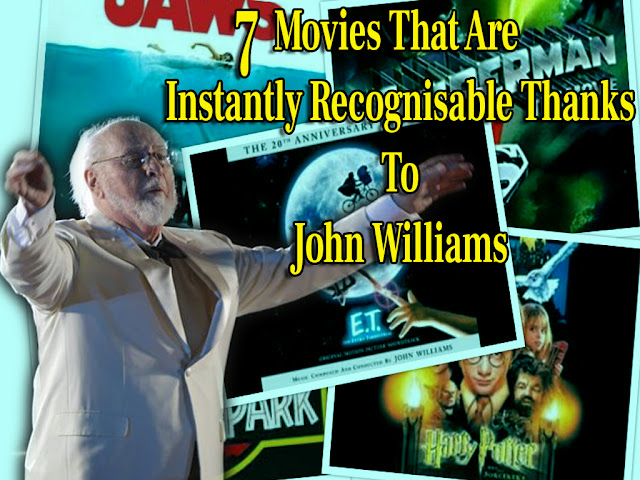 1 - Star Wars
It's one of the biggest franchises in the world and has been since it exploded on to the big screen back in 1977 and of course it needed a soundtrack to compliment the excitement on screen and Williams didn't disappoint.  In fact, when George Lucas heard the soundtrack for the first time during the making of A New Hope, the director said that the music was one of the few elements that exceeded his expectations.

2 - Indiana Jones
Adventure!  That's the emotion the theme to Indiana Jones evokes.  Thanks to Steven Spielberg we get two for the price of one in the signature piece.  When John Williams was writing the music he went to Steven with two versions for the melody.  Spielberg asked "can't you use both?"  So he did and we get the familiar tune in section A and B.

3 - Jaws
"Is this a joke?"  That was Steven Spielberg's reaction when John Williams played the simple sinister piece to the director for the first time.  Hard to believe but if ever there was a example of the talent John Williams has, it's the main theme to Jaws.  Simple, but terrifying.  A piece that has become so famous in the horror genre and movie soundtracks in general.  You only hear the signature piece when the shark is actually present on screen.  The kids with the fake fin for example didn’t have the music playing.  This was to condition you that the music was associated with the shark and only the Great White.

4 - Close Encounters of the Third Kind - Five Tones.
He went through three hundred versions before settling on the piece we know today.  He wanted a five note piece that ended on an up note so it left you feeling curious.  Kind of when you ask a question.  Williams said it can't sound like a song, it can't be seven notes but five.  He was nominated for an Oscar for his work on Close Encounters but lost out to Star Wars which of course he probably didn't mind as that was his work too.

5 - E.T The Extra-Terrestrial
The soundtrack to E.T. The Extra-Terrestrial has been described as a sort of second more emotional movement to the music of  Close Encounters.  The end piece is now instantly recognisable as the piece from E.T.  It's fast paced, uplifting and a classic John Williams piece.  As often with pieces from John Williams you have a story within the music which results in transitions to different styles.

6 - Jurassic Park
Steven Spielberg's 1993 Dino classic once again had the magic of John Williams and again we were not disappointed.  There are a few pieces of music from the soundtrack that are instantly recognised as Jurassic Park.  Listening to the end credits you get all of those pieces in one and as a result, like E.T. The Extra Terrestrial you are treated to a roller-coaster of emotions.  The vibrant familiar piece that once again evokes a feeling of adventure which you often get with John Williams.  This transforms into a peaceful piano piece that has a relaxing pace and perhaps a false sense of security and finally the ominous piece that has a sense of danger and perhaps a warning.

7 - Superman
How could we do a list of instantly recognisable John Williams pieces without mentioning Superman?  The "Superman March" or "Superman Main Theme" is used over the opening credits and in my opinion makes the credits to Superman some of the best ever produced.  The music  consists of two sections, an "A" theme which is the main part of the melody and a "B" theme which is a bit lighter in mood and which often connects the "March" to the "Fanfare."