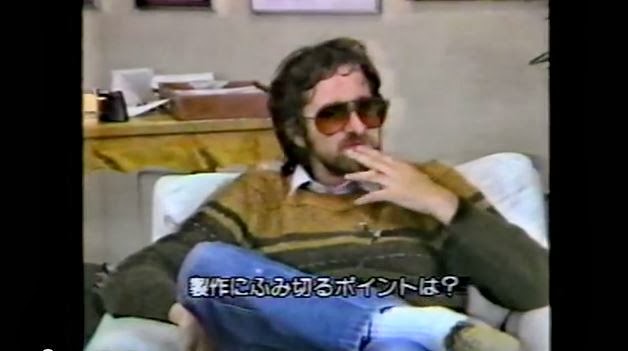 This is a rare gem.  It's from 1982 and Japanese TV.  Steve Spielberg talks about Raiders of the Lost Ark.  Also see his eyes light up when he sees all the arcade games in the room.

The video is in English except for the Japanese commercial breaks but are still worth watching for their entertainment value.  Look out for Steven Spielberg on the set of Twilight Zone: The Movie where Spielberg directs the segment, "Kick the Can."

From 1976REDRYDER:
This is an interview with Steven Spielberg that was on Japanese Television when I was stationed in Japan while in the Air Force back in Christmas of 1982. The TV crew came to his house for the interview. It is very good. This was taken from original broadcast with Japanese commercials! It is so awesome. It was on VHS tape and converted a few years ago to DVD.