Review: "The Outsider" - An HBO Original Series Now Available on Blu-ray/Digital and DVD 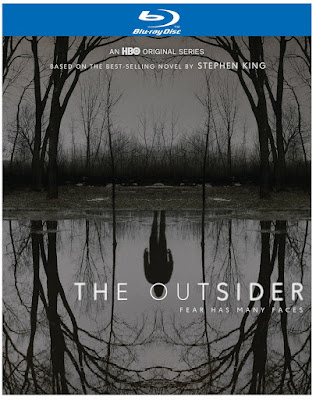 The Outsider is a mini-series based on the best-selling novel by Stephen King. All ten episodes aired on HBO earlier this year, and now the entire run is coming to Blu-ray/Digital and DVD July 28. This is a spoiler-free review of the series on Blu-ray.

What would you do if you were accused of the most horrific crime, the brutal murder of a young boy? All the evidence is stacked against you, including eyewitnesses who place you either with the victim the night of his death, or at the crime scene. You know you’re innocent, and you have an alibi for the time of the crime, with witnesses to back you up. There’s simply no way you could be the perpetrator. It's just not possible to be in two places at the same time. But how do you convince those who doubt your story? That’s the dilemma facing Terry Maitland, educator, little league baseball coach, and pillar of the community.

Police detective Ralph Anderson knows Terry. But he’s also a man of the law, and he sees the evidence before him. The facts are the facts. Until Terry’s denials begin to chip away at his confidence, and an unorthodox investigator, Holly Gibney, begins to open his mind to the idea that there may be more going on than meets the eye. Something of a supernatural nature.

I read the novel before seeing the series, and I was swept along from the first page. It truly is one of King’s best works in recent years. I’m happy to say the series struck me the same way. From the first episode, I was hooked. It’s an excellent page-to-screen adaptation. It's moody, atmospheric, and beautifully shot.

Like many adaptations, changes occur in the journey from the author’s pen to what is captured on camera. The Outsider is no different. Some character names change, the timing and placement of certain events, the creation of new characters, and whatnot. The book was very fresh in my mind when I watched the series, so a few of those alterations were slightly distracting at first. With the understanding that books and television are two different mediums, and sometimes change is needed to express aspects of the story in more efficient ways, I wasn’t taken out of the story for too long.

Another change was the casting of Holly Gibney. I had just come off three seasons of seeing Holly brought to life by Justine Lupe in the television adaptation of another work by King, Mr. Mercedes. Having a different actress in the role felt odd to me initially, but Cynthia Erivo completely won me over as the eccentric and highly intelligent investigator. The two actresses had different ways of approaching the character, but both versions are consistent with what King wrote, at least to my sensibilities.

The rest of the cast is outstanding. Ben Mendelsohn is always a pleasure to watch, and brought a silent strength and vulnerability to the character of Ralph Anderson, while Jason Bateman brought a sincerity and believability to the criminally accused Terry Maitland. Mare Winningham and Julianne Nicholson, as the wives of Ralph and Terry, respectively, shine as strong women supportive of their husbands — even, and especially, when it’s not the easiest thing in the world.

The Outsider consists of 10 one-hour episodes, and there are seven bonus features found on the Blu-ray, including a visit to the set, conversations with Stephen King and Jason Bateman, an examination of Holly Gibney, adapting the book, and inside looks at each of the ten episodes (these were presented on HBO after the airing of each episode). There’s also a new featurette for this release, “El Cuco. The Baba Yaga. The Outsider.” Best not to watch the bonus features till you've seen the series, however.

The Blu-ray set consists of three discs (as does the DVD), with the episodes and bonus features spread across all three. It also comes with a code so you can add the series to your digital library. The bonus features add up to about 40 minutes of viewing time, so they're fairly short, while the series clocks in at 600. English and French subtitles are available.

The Outsider is a story that will stay with you long after you’ve watched the series (and/or read the book), and it is something you'll want to watch more than once to see what you missed on your first viewing. (I've been through it twice now.) It's a powerful story of the nature and horror of evil, whether from a natural or supernatural source. It will make you wonder if you would be able to look beyond the evidence at hand to the possibility of an explanation that lies outside your comfort zone.

You can read the original press release for The Outsider on Blu-ray/DVD/Digital here.

Thank you to Warner Bros. Home Entertainment for providing a copy of the The Outsider on Blu-ray/Digital for review purposes.