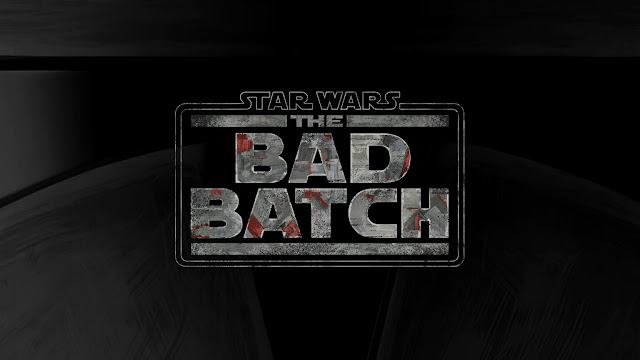 The next entry from Lucasfilm Animation was announced Monday afternoon.

Read the official announcement from Starwars.com here. The show will debut on Disney+ in 2021.

For those unfamiliar, the Bad Batch are a group of four (some would say five, more on that in a moment) misfit clonetroopers. Much like many super hero ensembles, they all have differing and complementary abilities and work completely as a team. Hunter, Wrecker, Crosshair and Tech make up the group, recruited by Commander Cody for the assault on Anaxes, a world controlled by Separatist general Trench, an arch-enemy of Anakin Skywalker.

Hunter has a real Rambo vibe about him, with his unruly hair and red headband. Wrecker has been a fan favorite. He's a brute who is afraid of heights but unafraid of smashing battle droids together by the dozen. Crosshair is the quiet sniper of the group. He reminds me of Private Jackson, Barry Pepper's character in Saving Private Ryan. Finally, there's Tech, the computer wizard hacker of the group.

The Bad Batch are featured in the first four episodes of the seventh season of The Clone Wars, which debuted on Disney+ in February. Fans were first introduced to this bunch in 2015, when Starwars.com released the four episodes in proxy animation form. Another clip of the group was shown in a scene set in a Kashyyyk forest, battling giant web-spewing praying mantis-like beasts. Check out the clip below:

One of many great things The Clone Wars did was humanize the clones, with their own names, personalities, motivations, strengths and flaws. One of the standouts was Echo, who was ultimately captured way back in Season 3 (2010-11) in an assault on The Citadel. Echo was brought back for the Bad Batch arc, and at the arc's conclusion, joined the band, increasing its number to five. Echo's inclusion in this series will make for a really nice and tangible link back to The Clone Wars.

It also means continued story direction for Dave Filoni, who will serve as executive producer of The Bad Batch. I think it's fair to say Filoni enjoys near-universal support and popularity among fans for his show direction. He has carried on many core ideas from George Lucas in recent years in terms of what stories to tell and how to treat the characters he's helped create. Filoni being directly attached, in my mind, gives The Bad Batch a heavy dose of instant credibility. Essential parts of Filoni's team, like voice actor Dee Bradley Baker and artists like Killian Plunkett, Joel Aron and others, will also keep working on some more great content.

All had been relatively quiet on the Star Wars front in recent months, due in part I'm sure, to the ongoing COVID-19 crisis. So this announcement was much welcomed. So far, it seems the year 2021 will have several Star Wars series running on Disney+. I can't wait!