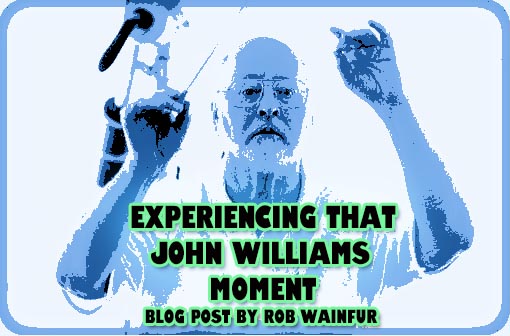 What is the John Williams Moment?

I can safely say that John Williams and his wonderful, his magical, his sublime music has been with me every single day since I walked out of that cinema having watched Star Wars for the first time in 1977. For four decades I have amassed some truly magical music moments thanks to the master, but every now and then you get what I call a John Williams moment that if you’re lucky will stay with you for the rest of your life.

What is the John Williams moment? Well, let me try to explain. You know when you smell a certain food and it instantly reminds you of another time in your life? Perhaps it’s the smell of toast in the morning that takes you back to your mother cooking you breakfast before heading out to school. Or maybe it’s not a smell. Perhaps it’s a special place that you had fond memories of and when you visit it brings a smile to your face. Well, for me there are certain tracks from the vast soundtrack collection of John Williams that do something similar. That John Williams Moment. A single track that will evoke an emotion, a memory and maybe initiate goosebumps.

For example, when I listen to Yoda’s Theme from The Empire Strikes Back I get a warm feeling inside and generally followed by a smile. This one piece for some reason reminds me of the time I used to play with my Star Wars figures as a kid in my bedroom. It could be because Yoda was one of my favourite figures and I recall playing music related to Yoda quite a lot while I was playing out my made up Star Wars stories with my Kenner figures.

Another John Williams moment is from the soundtrack to Jaws 2. The track is The Catamaran Race. In the movie the scene plays out where we see the group of teenagers enjoying themselves on the water and scenes of happiness and friendship are in plenty, of course before the terrors that await. This piece evokes a John Williams moment for me more to do with the tempo of the music and the way John Williams captures summer in that one track. I always play this during the summer and always when I’m travelling to the beach for some chill time. Another piece that evokes this memory is Montage from the original Jaws soundtrack. That has a similar tempo and of course the scene being played out was of people heading to Amity for the holidays and people on the beach. As I was born in the early seventies, this piece reminds me of the long summer holidays we had and how most of my time was spent either outside or on a holiday somewhere. A holiday John Williams moment.

The Catamaran Race reminds me of summer every time. It’s only fitting that I have a John Williams moment that reminds me of winter and I don’t mean in a bad way. I love winter. Some people find that strange but cozy nights in, maybe snow outside and some soft light is bliss for me. Magical you could say and magic is in abundance with Harry Potter and the Philosopher's Stone. The first piece from the soundtrack called Prologue is such an iconic piece and instantly recognisable as the music to J.K. Rowling’s creation, Harry Potter. This piece along with Leaving Hogwarts and if I can sneak another piece in from Chamber of Secrets, Fawkes the Phoenix. All these pieces bring me a winter John Williams moment. Whereas the previous John Williams moments have evoked a childhood memory, these pieces don’t do that. Instead make me cozy inside and remind me of those lazy winter nights in my current house with my wife perhaps watching a Harry Potter movie and just relaxing.


There are more. I feel so lucky to have so many John Williams moments. It’s a special find when you connect with a piece of music that stays with you. Binary Sunset from Star Wars, Jurassic Park’s Journey to the Island and The Raiders March all give me a John Williams moment for different reasons. Also E.T’s Over the Moon. I had a 45’ single of the main theme to E.T. and on the B side was this piece. I had a portable record player and I played this side so many times. I would pretend to conduct a full orchestra to this. A special John Williams moment every time I listen to this.


It’s amazing how music can do this. How one piece can take you to a different time in your life and evoke strong memories and emotions. I do have similar moments with other composers such as Jerry Goldsmith’s Star Trek and Alan Silvestri’s Back to the Future but the amount of moments I get with soundtracks from John Williams make him easily my favourite composer. He is the soundtrack to my life. Here’s to a lot more John Williams moments.

Do you have any John Williams moments? Let me know in the comments below.