BLOG: Harrison Ford: The Icon and His Appeal by Michael Heather 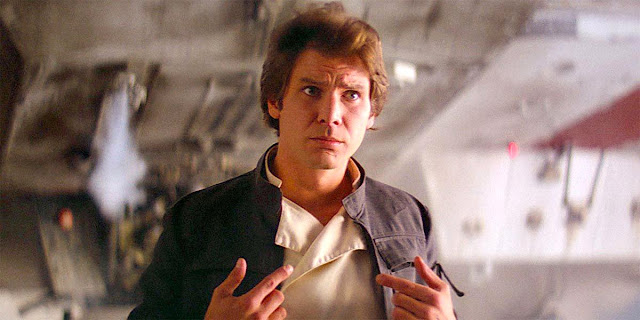 Harrison Ford: The Icon and His Appeal by Michael Heather

Harrison Ford is the Elvis of several geek generations, certainly the ever-ageing ones like me that grew up on the cinema of Lucas and Spielberg. There is a wonderful moment in the film ‘500 Days of Summer’ where Joseph Gordon Levitt’s character Tom, having fallen for the quirky charms of Zooey Deschanels’ title character, does an impromptu street dance in celebration of his new love. All the supporting characters celebrate this new feeling with him and they all join in the parade...and then Tom suddenly catches a reflection in a window. It’s Harrison’s reflection from the medal ceremony in Star Wars, re-purposed so the reflection appears to show Han Solo winking back at him. The dance scene is supposed to reflect Tom’s high point of the film, his character in the initial giddy throes of love, and the point of the reflection moment is clear: confirmation and approval from the coolest guy that director Marc Webb could think of. Webb knows you will understand the joke...if you are going to get approval from anyone then you can’t get better than Han Solo, aka Indiana Jones, aka Harrison Ford. When I saw this moment at the cinema I could tell the audience immediately understood it, provoking exactly the reaction the director had intended and it was interesting because it confirmed to me the special place that Ford has for so many film fans.

The amazing thing about Ford and his remarkable career is that he spring-boarded it on the back of a series of films that are notorious for pigeon-holing actors who struggle to escape the trappings of a galaxy far, far away.

So why did Ford stick and endure where so many others failed? What is it about Ford that his very appearance in The Force Awakens trailer made millions of geeky film fans suddenly shed a tear or two of joy into their popcorn?

Ford would famously tell you he had an enormous amount of luck and, to be fair, he isn’t wrong. When you happen to make friends with a film-maker like George Lucas, who just happens to be thinking of making a Flash Gordon-type film, who also happens to be friends with a novice director called Steven Spielberg and who, eventually, gained his career-defining role on the back of a stroke of bad luck for a mustachioed TV actor who looked too good in a Hawaiian shirt...well, he has a point. Jeez, even Fords scar from a car skirmish happened to lend his chiselled good looks a distinctive and indelible look. 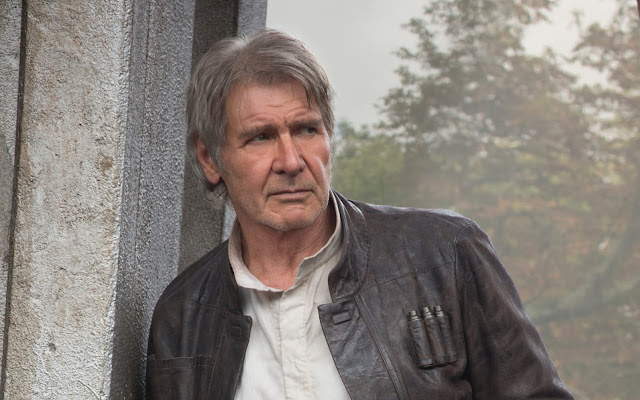 But, also to be fair, he’s doing himself a dis-service. An actor who famously, either to the delight of a Spielberg or to the annoyance of Ridley Scott, liked to get fully involved in both his character and, increasingly, the film as a whole, he always attempted to bring more to the table than just his line-reading. You love him? He knows.

It is interesting to go back and look at Ford’s ever increasing popularity, and the films that shaped it,  and consider what it was that worked so well.

For most people of my age, the original geek generation if you will, it was, of course, Star Wars where we first discovered him. Personally, being six years old at the time, ironically I preferred the character of Luke upon my first viewing when I was snuck into the cinema on my older brothers birthday. Fords’ cocky, funny, swashbuckling and cool Han Solo, the character that most audiences could identify with as the cynical space pirate went over my six year old head. At that point in my young life the whiny kid with the longer hair was more appealing because some ancient old dude had given him a fancy laser torch thing. Cool.

Ford was determined to show his ‘usefulness’ to Hollywood following his star turn and turned up in a variety of films to mixed results. But his persona and star charisma was already building…a cocky WW2 pilot in ‘Hanover Street’ (this time with a co-pilot with slightly less hair) and a sharp shooting, smart mouthed Colonel in ‘Force Ten From Navarone’. By the time he reprised his Han Solo in ‘The Empire Strikes Back’ his cool, cocky (those words again) persona had started to form and he sneakily stole the show in the sci-fi follow up while in collaboration with director Irvin Kershner.

His director on Hanover Street, Peter Hyams, marvelled (on the DVD commentary) at Fords presence and how ‘unbelievably handsome’ Ford was in his leather jacket. It is undeniable that Ford was an incredibly handsome film star but that does not get to the route of his appeal. It helps that his good looks were not totally conventional...a slightly skewed nose, the aforementioned chin scar and that appealingly odd lop-sided grin. What Ford, along with screenwriter Lawrence Kasdan and director Kershner, ingeniously did with Solo is to build on that characteristic that was increasingly appealing to Ford fans everywhere. His vulnerability and, consequently, his identifiable traits. This, as much as anything, would serve Ford incredibly well for the rest of his career.

The ad-libbed conversation Han Solo has with the baffled Imperial on the Death Star communicator.
The bucket of hydro spanners that fall on his head during an asteroid field.
The weary, exasperated expression on his face when being faced with a scimitar wielding Arab.

Ford looked every part the handsome leading man but his increasing ability to humanise these iconic characters and make them stick would prove invaluable. As an actor he understood the essential ingredients of building a memorable screen character...he could do cool and macho in his sleep but understood that building on that with humour and a willingness to be self-deprecating was essential to the experience.

Fords run of films from ‘The Empire Strikes Back’ onward is truly remarkable. Not just as in box office success but in terms of iconic roles and movies. Plenty of films make money but not that many films are cherished and studied in a way many of Fords’ films are. Back to that lucky streak again even his box office stutter in 1982, the sci fi noir ‘Blade Runner’, turned out to be regarded as one of the best and most influential sci fi films of all time.  An actor would be happy to achieve one iconic role but to have Han Solo in your pocket, alongside Indy and Rick Deckard, is an embarrassment of riches. That’s even before you start discussing his other successes...a Richard Kimble here, a Jack Ryan there, an ass-kicking American President on the way.

Ultimately his iconic roles for Lucas and Spielberg are the two he will be remembered for but his place in geeky hearts is huge. We grew up with him.

‘Empire’ magazine once reviewed the first Star Wars sequel and declared that you could see the film star emerging in that movie. It is often with a little embarrassment that I talk of my geeky love for Ford...my Han Solo in stormtrooper costume statue sitting under my framed Drew Struzan ‘Indiana Jones and the Temple Of Doom’ poster. My Blade Runner blaster proudly sitting next to my Chachapoyan idol just across from my Blu-rays of Star Wars, Indiana Jones, Blade Runners and numerous of his other titles I grew up with.

But here’s the thing.
After I spent my summer of 1981 pretending that my grans clothes line cord was a whip I persuaded my parents and my brother to sit down with me and watch every Ford film the BBC or ITV could get the rights to show. We sat down as a family and watched him growl at Robert Shaw, romance Lesley Anne Down, fight Nazis, marvel at dying replicants and save the lovely Princess Leia. As I got older I watched him lose his wife in Paris, have illicit sex with Greta Scacchi, team up with Melanie Griffiths and point his finger at anyone who got in his way.

He will always be the actor I grew up with, the only actor who ever stood up to George Lucas and forever our movie icon.

And that is why we hid our tear/s when he stepped back on the Millennium Falcon.