STAR WARS AND NOSTALGIA: WHERE IT WORKS

One of the most powerful words in Star Wars fandom is Nostalgia.

A quick search for the definition of nostalgia states: a sentimental longing or wistful affection for the past, typically for a period or place with happy personal associations.

During my years observing Star Wars fandom, this word comes up in my mind over and over again, for both good and bad reasons.

One of my preferred Star Wars podcasts, Skytalkers, recently did a deep two-part dive on the concept of nostalgia within Star Wars, its place, and where its listeners feel Star Wars media and creators have hit and missed with nostalgia. It’s a great listen, I highly recommend it, and you should absolutely subscribe to that channel. You have time.

Inspired by that podcast, I decided to take a crack at nostalgia within Star Wars, a highly complex topic.

How should we define nostalgia within Star Wars films and publishing? Is nostalgia an attempt by the creators to devise a callback for the characters within a story, or for the audience consuming it? Can both sides of that coin be captured with the same item? Is that when nostalgia is at its best? What if the attempt misses the mark on both sides? How detrimental to the rest of the project is a failed attempt at nostalgia?

I’m going to keep it positive in this post, so here are my five most nostalgic moments from Star Wars films outside the original trilogy. After all, isn’t the original trilogy the first ingredient in creating the intoxicating brew that is known as nostalgia?

So here goes, in chronological order from number 5 to number 1, my moments of nostalgia in post-1983 Star Wars.

A 16-year-old question so many of us had between Return of the Jedi and The Phantom Menace was, “What were the Jedi Knights of old like?” This shot answered that question for me.

The first chill-inducing moment of TPM was this shot, with John Williams’s Force theme providing the perfect audio to this visual. The Force theme was the ideal reminder of the power of these Jedi, as Qui-Gon cuts through the door, using a lightsaber in a way we hadn’t previously seen. This was essential in the prequel trilogy, that we see more experienced and skilled Jedi Knights at work.

In this case, the element of nostalgia is sourced to an imagined thing. My imagination was continually sparked about what Episodes I-III would be like in the 16 years since Return of the Jedi. It was the realization of something I always thought or hoped would be there, that actually turned out to be there. This formula is at work in the moment I chose later in this post about Revenge of the Sith. 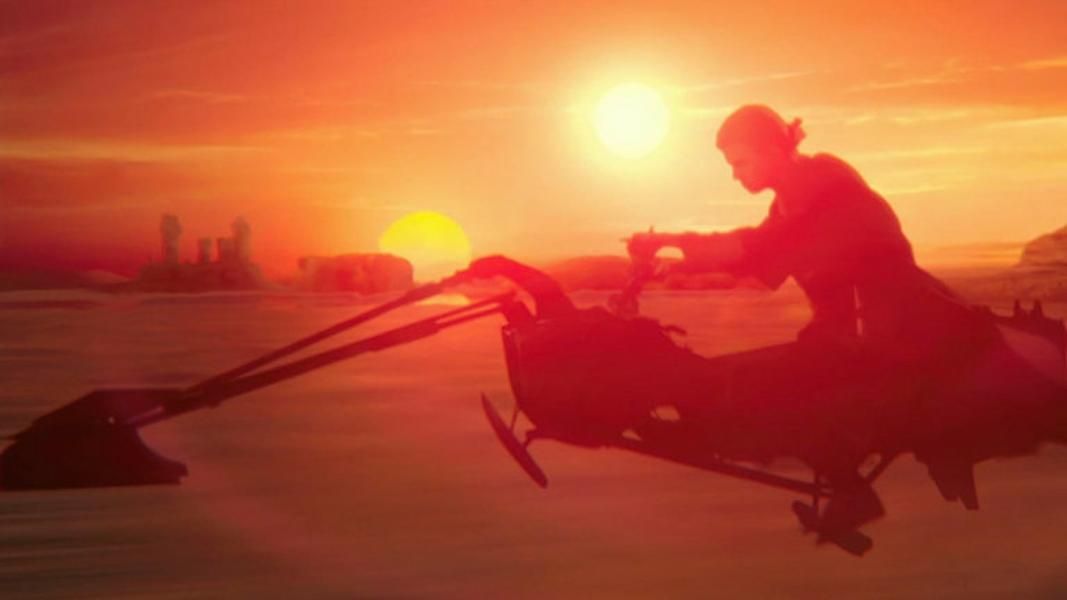 How about a double dose of nostalgia in this instantly classic shot from Attack of the Clones.

The emotional and dramatic stakes of Attack of the Clones slowly build to the point where Anakin and Padme return to Tatooine, in search of Shmi. The sense of foreboding is palpable.

We get this beautiful shot of Anakin on a swoop bike, in shadow, with the famous twin suns of Tatooine back-lighting him. Then add in a reprisal of the Duel of the Fates musical cue by John Williams. That is what wraps up this bit of nostalgia for me.

We all know Duel of the Fates was first used in The Phantom Menace for the lightsaber duel between Qui-Gon, Obi-Wan and Darth Maul. George Lucas said he envisioned a musical cue with religious overtones, that indicated “larger hands at work” in the fates of these main characters. Now, he applies it to Anakin, who was uninvolved in the aforementioned duel, but to whom the theme seems to more directly apply. That sense of dread only increases with Williams’s theme applied here.

And it takes on deeper meaning as the film moves along, as we see the death of Shmi and Anakin’s subsequent slaughter of the Tusken Raiders, his first obvious step towards the Dark Side.

We are reminded musically of what happened in the last film, but it also works in terms of what this character is about to go through, tying together characters, events and yes, fates, from one film to another.

A lot of people describe getting chills at something, and the phrase is often used metaphorically. I can honestly say, hearing Nute Gunray say these two sentences in Revenge of the Sith, just as Anakin/Vader enters the Mustafar control room, gave me actual chills when I saw it in the theater.

As Anakin walks purposefully into the control room, Gunray says “Welcome Lord Vader. We have been expecting you.” When I heard that, it was like I always knew that line of dialogue would be there, in my subconscious, but I actually saw it and heard it.

The line of course calls back to Return of the Jedi, when Emperor Palpatine greets Luke Skywalker with the line of “Welcome young Skywalker. I have been expecting you,” as Luke and Vader walk into the Death Star II throne room. In this case, the nostalgia fit perfectly within the story. The context is proper, and it works with Lucas’s overall goal of having the father and son encounter similar events, environments and even dialogue, but from opposing points of view. I see the connections Lucas was making between the drama in the final chapters of each trilogy. Just perfect.

There are moments in The Clone Wars that represent Star Wars at its absolute best. The Yoda arc that concluded season 6 of the series is mind-blowing, even to this day and after many repeat viewings.

Yoda ventures to Dagobah and communes with Qui-Gon while wandering the forest-swamp of our favorite Jedi training planet. As the light guides Yoda through the swamp, we hear a wonderful rendition of Yoda’s Theme, as composed by Kevin Kiner. The authenticity of Liam Neeson voicing Qui-Gon adds even more warmth to this scene. Not just the sound of his voice, but him laying out the big picture of the Force in a way we’ve never heard before. The final “Goodbye my friend” Qui-Gon utters to Yoda as the scene ends is emotional for me to hear to this day. We only saw hints of this friendship in TPM before Qui-Gon’s untimely death. Now, it is presented to us in a context that is beautiful.

It’s a scene that perfectly balances the past, present and future, from the characters’ point of view. There’s a small hint of The Imperial March in this scene, though Yoda’s theme flows brilliantly.

Throughout the entire saga, I would argue Yoda is the character we trust the most. It is Yoda who provides the final confirmation of Luke’s parentage in Return of the Jedi. We didn’t quite believe it until Yoda said so. And here, Yoda’s journey is packed with nostalgia that works on multiple levels.

Many of us have our favorite “secondary characters.” Bail Organa tops that list for me. Jimmy Smits is the ultimate professional actor, and lends integrity, decency and empathy in most of his roles. Lucas casting him to play the role of Bail was one of many underrated master strokes of the prequel trilogy.

But here, he shows up in Rogue One, which was something the unspoiled me did not expect upon first viewing. Gareth Edwards handles his reveal so beautifully, with Bail emerging slowly out of the shadows. We hear a slow, soft rendering of the Force theme as Bail arrives at the table where Jyn is being briefed on her mission to help find Galen Erso.

It’s a reveal that just naturally brings a smile to my face. “Oh good. He’s still with us. He’s here. He’s in the fight, just like the last time we saw him.”

Bail’s appearance comes right after Mon Mothma claims to have the goal of bringing Galen to the Imperial Senate for testimony about the Death Star. It indicates increased stakes in this mission briefing.

But for me, the appearance of Bail was an unexpected, but welcome surprise, and makes a very tangible and strong connection to the prequels in a story set within the original trilogy era. A novel focusing on Bail Organa remains high on my untold story list.