JURASSIC PARK: I Take A Look Back At The Steven Spielberg Classic 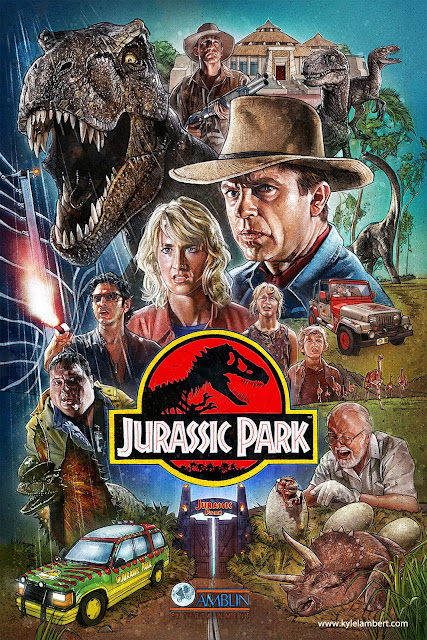 Jurassic Park: I take a look back at the 1993 classic.

Jurassic Park is a good old fashioned pop-corn movie and Spielberg made it to be just that.  He said:

“I didn’t make it to change the way people say the world.  I made the movie because it was entertaining and it was the kind of movie I wanted to see.  I always wanted to do a dinosaur movie so in a sense this was my hobby movie." 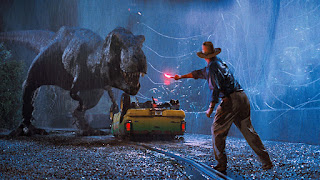 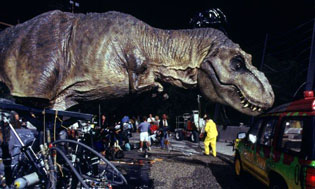 The CGI coupled with the animatronic dinosaurs from the talented and missed Stan Winston workedbeautifully even if the giant T-Rex Winston created kept malfunctioning on set due to the water used for the rain kept getting into the mechanism of the dinosaur causing it to shake like an old man on set.

Once again Spielberg called upon John Williams to write the soundtrack and of course the composer didn't disappoint.  What is one of his finest soundtracks I have had the theme tune in my head every single day for decades and I'm not complaining.  One piece still sends shivers down my spine and that piece is Journey to the Island.  Next time you get the blu-ray out or DVD find the scene with the helicopter flying over the island and whack the sound up.  Fabulous!

Jurassic Park won three Oscars.  Sound mixing, sound editing and of course visual effects.  In 2013 with it’s 3D release and Chinese cinema release the Jurassic Park franchise joined the $2 billion box office takings club.  With yet another Jurassic World out in June that number is set to grow and grow.

Finally before I go lets take a look at a few bloopers.  First at the beginning of the movie.  In the opening scene, a velociraptor is being introduced into the park from a shipping container. The velociraptor runs into the gate as it opens, knocking Jophery off the top; he falls to the ground and is attacked. As he falls, two hands come in to break his fall and prevent him from hitting the camera.

Secondly sticking with visible crew members watch carefully the scene where the raptors enter the kitchen (that angle where you can see almost the whole kitchen while raptors are coming in from the far away door). As the first raptor enters the kitchen, you can see someone grabbing its tail to hold the puppet-thing steady.