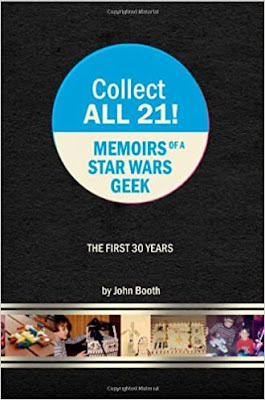 Rob Wainfur was one of the very first total strangers to read my book about growing up on Star Wars called Collect All 21! (I mean, look: He has the now-uber-collectible author's amateur cover edition) and he has been kind enough to publicly say nice things about it several times. This made for a seriously easy “YES!” when he asked if I'd like to contribute a guest blog for The Bearded Trio.

Because I like to explore the memories and associations triggered by popular culture recollections and nostalgia, and because music so often comes with so many attached images and emotions, I decided to poke around in some not-often-explored corners of John Willams' work.

John Williams was the first composer whose name and work I recognized - and who wasn't dead. He benefited, of course, from having his name attached to Star Wars, which, when I was a kid, made just about anything interesting.

It turns out, for instance, that Williams' music was tucked into corners of my brain long before I knew it, thanks to three classic 1970s disaster movies: The Poseidon Adventure, The Towering Inferno, and Earthquake. I really have only the vaguest recollections of these – I think I had an ear infection or something when my parents went to see Earthquake (in Sensurround!), and I don't know if I saw the other two in the theatre or on television, though both left impressions on me. That Towering Inferno scene where Jennifer Jones' character falls from the elevator on the outside of the building scared the bejeezus outta me, and come on: what little kid wouldn't love a movie where a giant ship turns upside-down?

A few years later, Star Wars had turned me into a space-adventure nut, and for a time, one of our local TV stations aired Lost In Space reruns every weekday in the after-school hours. I wouldn't learn until decades later that the show's theme was another creation of John (then credited as “Johnny”) Williams. Of the two versions he composed during the show's run, I prefer the original since it's the one I most associate with sitting on the floor with a snack and looking up at the television, though the fuller composition for Season 3 in 1968 sounds much more like the John Williams signature works to come in the next decade.

Of course, Williams was everywhere in my late-'70s to early-'80s childhood – the Star Wars trilogy, Superman, Raiders, E.T. - so by the time I was in middle school, I was pretty much a fan by default. I was fourteen in the fall of 1985, and my junior-high morning ritual began with a 6 a.m. shower, followed by breakfast and lunch-packing downstairs with the TV on. I seem to think there must not have been any good cartoons on that early, because I got in the habit of switching on NBC News at Sunrise. (And okay, fine: I had a crush on Connie Chung. Moving on...) Now, I can't remember if I had heard about the broadcast's new theme music ahead of time or if they just mentioned it at the show's close that September morning, but I vividly recall listening excitedly and actually getting goosebumps when John Williams' The Mission made its debut. I'll admit that more than a quarter-century later, the novelty has more than worn off – I'd bet most people just know it as the NBC News theme these days, but listen beyond the opening strains, and the piece really does gain a life of its own – but from time to time I still remember that morning and the suddenly stirring music coming from the single small speaker on our TV set.

Of course, I can't write about John Williams without visiting the Star Wars universe.

When I was 16 or 17, I was dating a girl whose dad had co-founded a pretty sizable chain of music stores. She was the first person I knew who owned CDs instead of tapes, and the stereo system in her family's living room was just freaking killer.

So while she wasn't necessarily a Star Wars fan - though she understood my love for the saga – she was a music fan, which made it an easy call when I bought us tickets to an outdoor summer performance of John Williams conducting the Boston Pops in a concert of his works.

I was a teenager, and it was summer, so it was an enjoyable night, despite two massive disappointments: One was that we arrived to find signs at the pavilion entrance informing us that John Williams was sick and wouldn't be conducting. Granted, the whole night would still be dedicated to his music, but this was my first opportunity at seeing someone personally involved with the saga in real life, even if it was going to be from a distance. The second disappointment?

NO STAR WARS.
None. Not a single piece of Star Wars music made the set list, and I remember looking over the program repeatedly and thinking and hoping and praying that maybe they'd be saving the Main Theme for a show-stopping encore or something - I mean, really. Arguably John Williams' single most recognizable score ever had no place in what was supposed to be a celebratory showcase - but a selection from the freaking Witches of Eastwick was worthy?

Oh, well. At least I got to hear The Mission in its entirety.

One day, that girl and I were in her basement looking through her dad's boxes of discarded vinyl records, and I found the Return of the Jedi soundtrack in there. Star Wars may not have been the hot thing anymore (at this point, we were around four years removed from Jedi's original theatrical run), but fan that I was, I couldn't help but take the LP home with me. 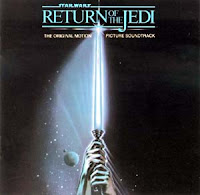 And that's where I discovered my all-time favorite piece of Star Wars music.

Clocking in at right around two-and-a-quarter minutes, “Rebel Briefing” is a bit of an oddity for a few reasons, not the least of which is that the track has no connection whatsoever to the Rebel Briefing scene in the movie.

In fact, if you look at any of the Jedi soundtracks released in the last 20 years, you won't find it by name. When they issued the remastered 4-disc anthology set in the mid 1990s, this was retitled “Leia Breaks the News/Funeral Pyre for a Jedi,” which is more suitable, since it bridges the onscreen moment when Leia tells Han that Luke is her brother to the scene of Luke burning Vader's body.

It's essentially two pieces – the first minute and 22 seconds pretty much correspond to that Han/Leia scene. The music then fades to a point where longtime viewers of the movie will mentally insert the call of Ewok horns signaling the End of An Empire party. The track then resumes with The Force theme, first played by what sounds like a single, mournful horn, soon joined by a melodic string accompaniment. And then it shifts into awesome, cycling through the theme again and building with the full orchestra and thundering kettledrum rolls to a crashing, lump-in-the-throat climax. It's barely a minute's worth of music and it still makes my heart race.

And the kicker, the absolute kicker that illustrates John Williams' gift, is that the best part of this glorious piece has no onscreen association: In the film, the camera pans from the funeral pyre flames to the fireworks in the sky after the first play-through of The Force theme. That rush of sound and energy at the end are nowhere to be heard in the movie.

Somehow this makes it that much more powerful to me: Hearing the music from the duel on the Death Star, for instance, comes with the fantastic mental imagery of Darth Vader's redemption. “The Asteroid Field” from Empire conjures the Falcon's dizzying flight as seen through my then 9-year-old-eyes. The powerful ending of “Rebel Briefing,” with its strange history and lack of visual cues, stands alone as a piece which captures so much of what I love about Star Wars without actually being tied to any particular character or scene.

Of course, since then, John Williams' music has been added to different parts of my life's soundtrack: My wife and I saw Jurassic Park on our first date and also associate that main theme with a funny junior-high band concert her brother played in, and the Harry Potter movies and music have been a part of my own daughter's world since she was little.

And those real-world moments and memories are what make so much of John Williams' work more than just music to my ears.

John Booth is the author of  Collect All 21! Memoirs of a Star Wars Geek – The First 30 Years as well as the time-twisting novel Crossing Decembers.  You can also visit the Collect Al 21! Facebook page for more retro goodness.