How To Spot Steven Spielberg's Reflection In The Movie, Duel

We all love the 1971 Steven Spielberg directed classic, Duel about a business commuter pursued and terrorized by the malevolent driver of a massive tractor-trailer across the empty deserted roads of America.  Some say Duel is a precursor to Steven Spielberg's other classic, the 1975 in-the-water thriller, Jaws.  Duel is one and a half hours of pure edge-of-your-seats entertainment and shows the early potential of Steven Spielberg even back in 1971.

The TV movie, originally 74 minutes in length was made for ABC's "Movie of the Week" and Spielberg was under pressure to complete the filming of the movie in just 10 days.  He did it in 13 much to the amazement of the crew who said it couldn't be done.  Insisting on using on-location shots rather than what would have ultimately been fake-looking studio shots, Spielberg can be forgiven for the odd blooper here and there due to the pressure he was under to complete the TV movie.

One classic goof is that you can briefly see a classic 70's looking Steven Spielberg's reflection in the telephone booth that our main character, David Mann (Dennis Weaver) frantically uses to desperately call for some help, seconds before the truck piles into it.

We've created a handy GIF and a short video below where you can spot Steven Spielberg in Duel.  The scene is 56 minutes and 45 seconds into the movie where we see David Mann stop at  Sally's Snakerama Gas Station to make that phone call.  When he enters the phone booth, look closely and you can see Steven Spielberg wearing a white shirt with a pattern, he's looking straight at the phone booth before looking down.

Believe it or not, this may not be the only place you can see Steven Spielberg in Duel.  This next one could be debatable but it's worth mentioning for you to make up your decision.  When David Mann's car starts slowing down on the climb up the hill we can see someone's head in the rear-view mirror.  A lot of fans speculate that this is actually Steven Spielberg's head.  This occurs at 1 hour 18 minutes into the movie.  We've taken a screen shot for you to decide: 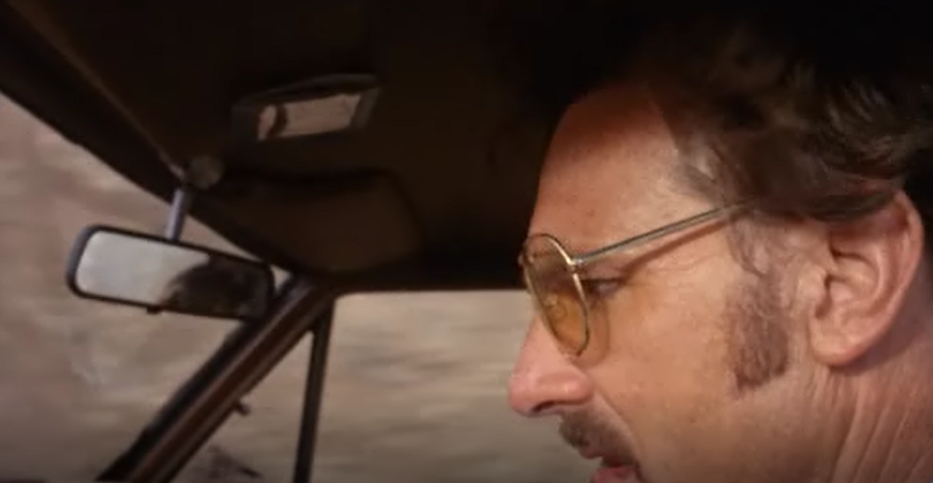 Finally, there is potentially a third place in the movie where you can see Steven Spielberg.  According to IMDB, apparently you can see the director in the reflection of one of the tables during the scene at Chuck's Cafe.  I've replayed this scene a number of times but I've personally failed to catch it.  If you know where it is, then please let me know and I'll update this article and credit you.