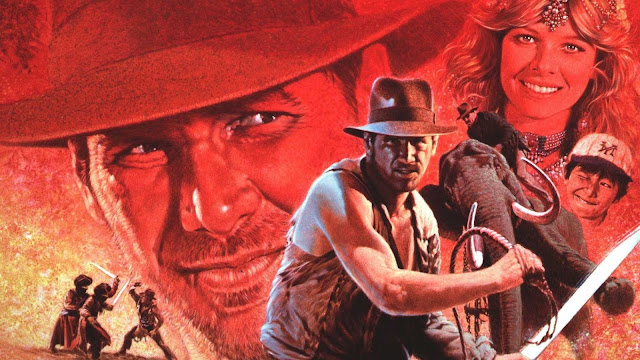 My favourite Indiana Jones film is Raiders Of The Lost Ark, probably not the opening statement you expected in a piece celebrating the (fortune and) glories of Indy's second celluloid adventure. However, Indiana Jones and the Temple Of Doom has somehow become the somewhat unloved sequel/prequel dismissed even by its own director who claims that “the only good thing to come out of it was meeting my wife”. The undeniably perfect pacing, framing, composing and overall genius of ‘Raiders’ is well documented but I just as often these days feel like I need to defend the movie or part of a minority (albeit strong) that needs to champion the many awesome aspects of Indy's darkest escapade.

No time for love? Far from it.

Every recollection like this seems to start with its own authors personal context and I have no intention of straying from that formula, unlike the film itself. I was 9 years old when I saw ‘Raiders’ and was immediately smitten, along with millions of others. Here in the UK it did seem to fall a bit more under the radar however...it was beaten by James Bond, Superman and even Dolly Parton! (9 to 5 in case you were wondering.) Even my best friend in school told me it couldn’t possibly be better than ‘Hawk The Slayer’…eat my rubber fella. Consequently it seemed a bit more like my little secret and it wasn’t long before I read about the sequel announced in Starlog magazine, at that point titled Indiana Jones & The Temple Of Death. I saved my pocket money for months to buy the video cassette of ‘Raiders’ and that prized possession started with a trailer for Temple Of Doom, actually just made up of clips from ‘Raiders’.

The first still I saw was in the US magazine Fantastic Films with a small photo of “action Indy” (no leather jacket / a ripped shirt sleeve) fending off two Thuggee swordsmen. My excitement was by now higher than the volume set by Marty McFly.

Temple Of Doom has fielded criticisms of being somewhat ‘over the top’ or unrealistic over the years which always seems a bit disingenuous to me in a series of films that celebrates its protagonists often wild escapes and general derring-do. Some context is needed here as well. TOD came out almost smack in the middle of the eighties, not a decade that could be accused of being shy and retiring. While the excesses of many eighties films were yet to come, Sly had already flexed his biceps in the first Rambo adventure and Arnie had already chomped an eagle to death while affixed to a cross in Conan. The fitness craze was booming and Harrison Ford obviously felt the pressure being pushed to his physical limits by movie star trainer Jake Steinfeld (“Body by Jake”) having previously proclaimed to be resolutely anti-fitness (“I’ve never seen a happy jogger” he told Starlog)

Temple of Doom was conceived right at the cusp of all this...glistening pecs, day glo imagery, new wave and euro pop and naff 3D Jaws sequels...so if it seems like TOD is throwing everything at you to compete, you can hardly blame Spielberg for it.

Of course all this came together in 1983 once the script was finalised by Willard Huyck & Gloria Katz infused now by darker imagery courtesy of Spielberg and Lucas’ changing personal circumstances.

When I finally got to see ‘Indy 2’ (at the same cinema in Weston-super-Mare where I had seen Return Of The Jedi the year before) it was my first non-parental-accompanying cinema experience...slightly ironic given the PG (Parental Guidance suggested) certificate that was pretty much invented for the film.

One of the many things I love about TOD is the tone that is set straight from the opening nightclub scene. Willie Scott, resplendent in that sexy low-backed Elliot Scott dress, breaks into that storming and unexpected fantastical song & dance sequence with John Williams’ rousing version of ‘Anything Goes’ coming out of every cinema speaker. Much as we all love Marion in ‘Raiders’ I have no issue with her deliberate mirror-image in this and here is Kate Capshaw telling you, albeit in fractured mandarin, what to expect in the next 1 hour and 58 minutes.

Spielberg then informs us that this is 1935...the events of ‘Raiders’ have not yet occurred so sit tight and fasten your seat belt...anything goes! 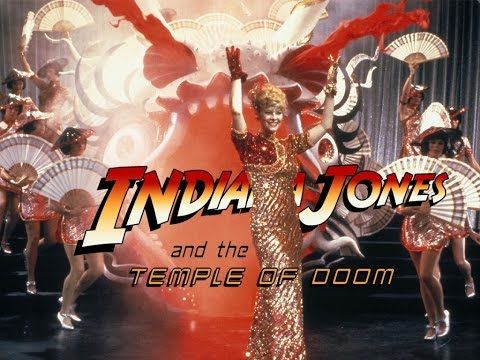 Harrison Ford, now beginning to ride the crest of his movie awesomeness, has his credit now fittingly emblazoned across the (full) screen...HARRISON FORD STARRING IN...before Capshaw strikes a pose IN FRONT OF the main title which takes up the whole wide screen frame in that familiar ‘Indy’ font (curiously the only Indy film to use it on screen despite being ubiquitous with the franchise and its marketing for nearly 40 years). The man himself then strolls casually down the nightclub steps, Spielberg's’ camera refusing to yet fully reveal the esteemed adventurer, space pirate and replicant hunter. Ford then takes centre screen, confidant, handsome and cool-as-all-hell in white dinner jacket...not a bad movie star entrance.

And, of course, you know the rest.

The UK’s esteemed film critic, the much missed Barry Norman, commented about TOD (in response to the tagline “...his greatest adventure!”) that “...well, yes, I would think it would be practically anyone's greatest adventure” and he’s not wrong. TOD came about (gleefully to my 12 year old self)) in a not-yet PC world where you could still practically throw anything at a movie and unashamedly. It is a literal and metaphorical roller-coaster that ends on a literal cliffhanger. The ripping-out-of-human-hearts may not sit well with today's Pixar world but it sure creates suspense and horror. This Indiana Jones is in danger. TOD’s truly dark scenes really add to the mounting horror beginning with Indy's discovery of the severed fingers necklace in the jungle, John Williams’ pitch-perfect (did you expect anything else?) ominous drums thumping in the background and warning of the very real dangers to come. This Indiana Jones is going to hell and you just hope he gets out alive and in one piece on the other side.

Indiana Jones and the Temple of Doom  is a sequel that truly tries to give you a different experience to the original (an always tricky potential stumbling block) and there are no carbon copy scenes here. Tonally Spielberg pushes and pulls you through every emotion, pulling out all the stops in his effort to entertain.

I watched it back in that cinema in Weston-super-Mare when I was 12 years old and I loved every single minute of it. The sheer joy I get when Indy escapes in Lao Che’s aeroplane with John Williams iconic music and when Indy finally appears at the top of the rope bridge with the last Sankara stone I had gone through it all with him.

Spielberg has nothing to apologise for. Now that’s a movie!