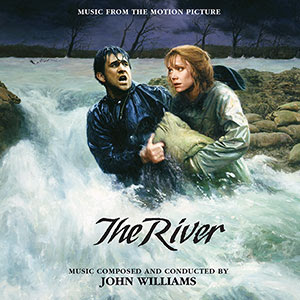 The River Gets The Intrada Treatment

Intrada have announced a special release of The River which was composed and conducted by John Williams.  This new edition will feature previously unreleased tracks including "Dialling the Hospital" and "Leaving Home."  We have the full press release below along with the link to order yours.  These sell out fast so don't delay.

The River is a tribute to a vanishing America—the America of theIndependent Farm Family. -- Mark Rydell, director

Intrada announces its latest collaboration with Universal Studios and UMe with the release of John Williams' Oscar-nominated score to the 1984 film The River. The film marked Williams' fourth collaboration with director Mark Rydell, having previously worked together on The Reivers, The Cowboys, and Cinderella Liberty. Released on LP by MCA Records concurrent with the film's theatrical release, the album was a strong presentation of the score, feauturing selections that were recorded specifically for the album. Nearly half of the soundtrack features rearranged or expanded versions of their film counterparts. As with Intrada's release of Monsignor, this new CD opens with the original remastered MCA program followed by the entire film score, including alternates, and is produced by Mike Matessino.

A firm entry in Williams' Americana oeuvre, The River features a strong theme for the homestead "under siege," heard in its fullest form during the spectacular "The Ancestral Home." The score also features the solo colors of flute, trumpet and guitar, moving between the power of family and home, lighthearted family life and the colder, darker nature of storms, both natural and human-made.

In the film, Tom and Mae Garvey (Mel Gibson and Sissy Spacek) are a Tennessee farming couple fighting a war to save their farmland on two fronts. Mother nature besieges the farm with violent floods on one side and on the other a greedy land developer (Scott Glenn) tries to foreclose on the farm in order to build a dam to produce power.

INTRADA ISC 441
Barcode: 720258544100
Retail Price: $21.99
Note: Due to local restrictions related to the pandemic, shipping time may be slower than usual
For sound samples, please visit the The River soundtrack page.