Indiana Jones and the Story of the Parallel Temples

The best essay on Star Wars I have ever read is Star Wars Ring Theory, written by Mike Klimo. Seriously, go read it. Now. It makes connections within and between the first six films I never would have suspected existed, and it’s brilliant work by Mike.

This is my feeble attempt at applying some of those principles to two sequences in the Indiana Jones franchise.

One of Mike’s core principles in his essay is that Episodes 1-6 have a kind of structure that follows the A-B-C-B-A format in that plot points and character actions early in one trilogy or film have opposite corollaries at the other end of a film or trilogy. Or to put it another way, the entire George Lucas Star Wars saga can be illustrated via a Yin-Yang illustration.

Using those founding principles, I try here to link the opening of Raiders of the Lost Ark, when Indy attempts to steal the golden fertility idol from the Peruvian temple, and the end sequence of Last Crusade, where he retrieves the Holy Grail in an attempt to save his father.
Bear with me as I try to draw the parallel actions and motivations here between those two unforgettable sequences.

RAIDERS
Indy climbs up a dirt mound, brushing aside twigs, leaves and jungle grime to make his way through the temple entrance. As he first makes his way into the temple, he moves further into darkness, moving from screen left to screen right.

LAST CRUSADE
Indy slowly walks up intricately carved steps in an ancient temple. As he begins the first challenge, it’s a clean walkway. Maybe some dust, but we’re in a very different and cleaner environment than what he encounters in the jungle. As Indy looks around, he is completely bathed in light, moving from screen right to screen left.

RAIDERS
The first trap Indy and Sapito encounter causes Indy to say: “Stop. Stay out of the light.” If Indy stays in darkness, he’s where he needs to be for this journey.

LAST CRUSADE
There’s no dark place for Indy here. The first two challenges occur in completely lit-up areas. He needs all of his mental awareness and education to correctly interpret those challenges.

Indy’s ally in Raiders is darkness. His ally in Last Crusade is the light.

RAIDERS
On his final approach to the fertility idol, Indy tests oval-shaped objects embedded in the stone floor. He discovers that stepping on the oval shapes triggers killer darts. He carefully walks across the floor, avoiding the oval shapes while tip-toeing on the stone to make his way to the altar.

LAST CRUSADE
Indy’s second challenge presents him with a floor full of letters. He interprets the “Path of God” to be “The Name of God.” In classic Indy fashion, he makes his first mistake, stepping on the “J” for Jehovah. His education kicks in, remembering in Latin Jehovah begins with an I. He then carefully steps on the correct letters, finishing the second challenge.

LAST CRUSADE
In maybe the most dramatic challenge, Indy comes across another gap, this one considerably larger than the one in the Peruvian temple. He knows he can’t physically clear this gap. His whip will do him no good. There’s nothing he can rely on but his faith. He closes his eyes. Places his hand over his heart. One last deep breath and he reaches out with his right foot, not sure if it will ever land on anything. It does. His faith is rewarded by seeing the invisible bridge that leads him to the Grail Knight’s chamber.

In Raiders, Indy can use his physicality and his best weapon to clear a gap. In Last Crusade, he has nothing to rely on but his faith and his desire to save his father to clear a gap.

RAIDERS
Upon reaching the altar, Indy replaces the golden fertility idol with the most non-descript item available to him: a bag of sand. And for a moment, the switcheroo appears to work. Until it doesn’t, and the temple begins to collapse.

LAST CRUSADE
The tension is high inside the Grail Knight’s room. Elsa offers to select the grail for Donovan to drink from. She picks the most ornate, shining golden cup she can find. The uneducated Donovan happily accepts, and drinks from the golden chalice. And for a moment, it appears to work. Until it doesn’t. Seizing the opportunity after Donovan turns to dust, Indy once again relies on his experience and education to pick the most non-descript looking cup he can find. “That’s the cup of a carpenter.” This time, it works.

RAIDERS
As we pick up Indy’s journey through the jungle, he’s joined by two guides. Both betray him, one right away, the other in the temple. By the time this part of the film is finished, Indy is alone and on the run from Belloq and his tribesmen.

LAST CRUSADE
Indy arrives to that awe-inspiring temple entrance in the canyon of the crescent moon accompanied by his two best friends, Marcus and Sallah, and his father Henry Sr. And he walks away with all three of them in tow.

When we first meet Indy, he is left alone at the end of his first temple experience. In Last Crusade, he has allies. Allies he’s earned over years of loyal friendship, and in the case of Henry, a reconciling that required him to humble himself, to forgive and to rebuild. Indy is stronger and better with his friends.

RAIDERS
Indy’s pursuit of the fertility idol is for entirely selfish reasons. He’s a thief, even if his intention was to give it to Marcus’s museum.

LAST CRUSADE
Indy’s pursuit of the Holy Grail had nothing to do with actually possessing the Holy Grail. His quest - stated while he was still in Venice - was to find/save his father. 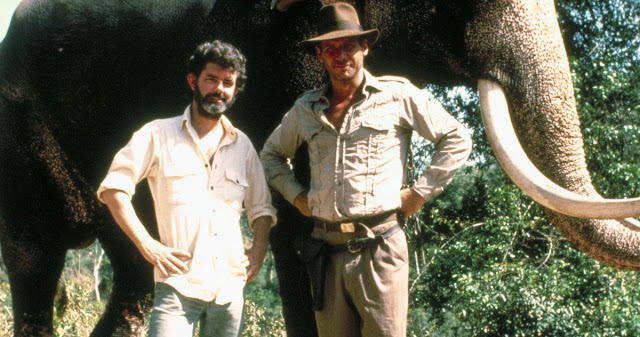 This represents the heavy George Lucas influence on the story. In Star Wars, George is famous for characterizing the light side of the Force as selfless, and the dark side of the Force as selfish. Indy’s motivation for entering these two temples are opposite. At the beginning of the trilogy, his motivations are selfish. At the end, they’re selfless. If there is one consistent theme through all the works of George Lucas - his films as well as The Clone Wars - is the contrast between selfishness and selflessness. The character of Indiana Jones goes through growth and evolution throughout the trilogy, most obviously exemplified by him fulfilling the title of “hero” when he rescues the children in Temple of Doom.

But I see Indy’s character growth exemplified through his environments and motivations to get the items he seeks. He goes about his business in similar ways in Raiders and Last Crusade, but his methods and motivations are vastly different, and represent how our favorite Man in the Hat grows over the course of the trilogy. When we meet him, Indy is “solo,” as it were. By the end of Last Crusade, he’s part of a crew.

As George would say, “It’s like poetry. It rhymes.”