Posters From Howard Kazanjian and Richard Edlund's Personal Archive To Go To Auction Including Star Wars, E.T. and Indiana Jones 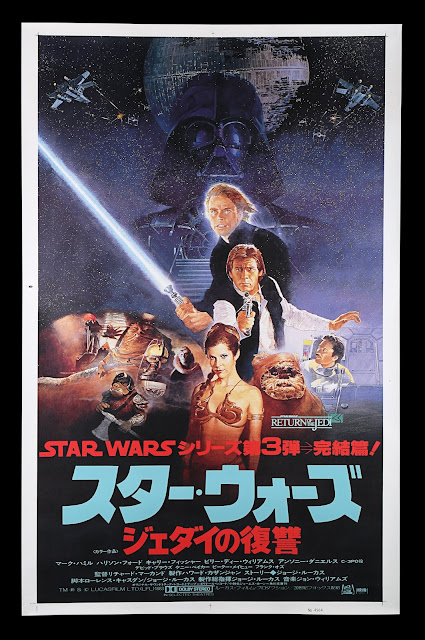 Film Producer, HOWARD KAZANJIAN and SFX Cinematographer RICHARD EDLUND are responsible for some of the most famous and best-loved blockbuster movies ever made, including Indiana Jones’ Raiders of the Lost Ark (1981), E.T. the Extra-Terrestrial (1982), Star Wars (1977-1983), and many more. A selection of posters from their personal archives will be amongst 341 lots going under the hammer on Thursday 23rd April 2020.

Lots from the Richard Edlund Collection include a US One-Sheet Poster from E.T. the Extra-Terrestrial (1982) featuring the iconic "bike over the moon" imagery. These posters were personally distributed by legendary director Steven Spielberg; to friends, key members of the production staff and close associates. This full-size 27" x 41" poster was made by design agency B.D. Fox & Family, and this is believed to be the first time a poster of this kind has been offered at this auction and is estimated to sell between £800 -£1,200 ($935-1,405).
A rare Special One-Sheet Style Poster by Howard Chaykin is estimated to sell between £1,000-2,000 ($1,170-2,345). The poster was printed in the summer of 1976, to be sold for $1.75 at San Diego Comic Con and Worldcon in Kansas City to promote Star Wars: A New Hope (1977).

12 posters will be up for sale from the Howard Kanzanjian collection, including a Star Wars: The Empire Strikes Back (1980): US One-Sheet Poster - "Style B" Studio Style estimated at £200-300 ($234-350). Printed in much lower numbers, this version of the poster is incredibly scarce with this being the first time a “Studio Style” has been offered for auction in the UK.
In addition, a US One-Sheet Poster from Vertigo (1958) is estimated to sell between £1,000-2,000 ($1,170-2,345) One of the most defining cinematic images of the 20th century, Saul Bass' spiral poster design has become synonymous with the film.

March Hochman, Prop Store’s Poster Consultant, commented on the upcoming auction: “Through our unique relationship with the studios and members of the film industry, we are delighted to offer these impressive and occasionally never before seen lots, from two of Hollywood's esteemed film-makers. There are some genuinely rare and fabulous posters with the vast majority presented in excellent, never displayed condition. With irrefutable provenance this represents a real opportunity for movie fans and film poster collectors to purchase their 'Holy Grail' piece. If early online bidding and interest is an indicator of popularity, then we expect there to be a lot of attention for our 341 lots at Prop Store’s Cinema Poster Live Auction on Thursday 23rd April 2020.”

Prop Store’s Cinema Poster Auction will also feature the following posters from the Richard Edlund and Howard Kananjian collections:
The auction will be live-streamed online for fans to track the bidding on auction day. Registration and bidding is now open: bids can be placed online at https://ukm.propstoreauction.com/m/view-auctions/catalog/id/240/, or over the phone by submitting a bidder form that can be downloaded from our website.