Next up is a film that established Indiana Jones as one of the most successful American film franchises of all time, Indiana Jones and the Temple of Doom (1984) 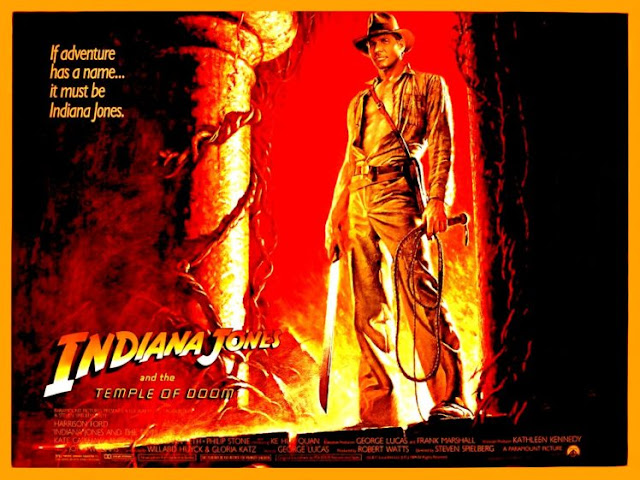 Temple of Doom - An Introduction
My first blog post on here about the character of Indiana Jones detailed its profound effect on my life over the course of the release of the original films from 1981-89. Right in the middle of that is Indiana Jones and the Temple of Doom, which debuted in June of 1984. George Lucas's story took Indy in a far darker direction than Raiders of the Lost Ark, and saw the franchise dabble in black magic, human sacrifices, bugs for lunch and other startling developments.
It's my feeling that people had less of a problem with the quality of the film than they did with the darkness Indy would confront and the nature of the Willie Scott character. With Steven Spielberg behind the camera, George penning the story, John Williams with the baton and Industrial Light & Magic going the distance again, film quality wasn't an issue.
I often say, I am unable to rank the original three Indy films, one versus the other. All three have very unique characteristics about them that allow them to stand alone. While Raiders and Last Crusade share many story beats, they are different enough that it's hard for me to compare them.
Temple of Doom is bold, probably impossible to get made today, and achieved instant classic status for me. Indy is at his most heroic, Short Round is a delightful sidekick, and the musical soundtrack is one of Williams' most versatile he's ever written.

1. In my view, this is the most naturally funny of all four Indy films. The escape from Club Obi-Wan had its share of laughs, but this quick scene still gets a chuckle out of me, 36 years and countless viewings later. It's another reminder of a consistent George Lucas thread about Indy: He's not as good as he thinks he is. I mean, asking Willie Scott if she can fly a plane? Sincerely? LOL...

2. Characters in the Indy films who have issues with flies. We know Paul Freeman does. But the key question here is, does Willie Scott eat this fly? Spielberg has detailed what the real world foods are at the Pankot Palace dinner, like custard in raspberry sauce. But what food is this, really? I have many questions.

3. I love the brief appearance of the shooting star in this scene. For me, it really sets a tone of "not of this Earth" for this film, which does stretch earth-bound realities to their limits on a number of occasions. I pay more attention to the shooting star than to Indy and Shorty's dialogue here, because the shooting star feels so random, yet necessary, early in this film.

4. The track "Nocturnal Activities" is a John Williams highlight from the soundtrack. The most fun, playful and maybe innocent track, it effectively complements the back and forth between Willie and Indy. It's the last truly light moment of the film that, up to this point, has had a lot of them. But from here on out, the light is pretty much erased and we go dark. Like, really dark.

5. This has always been my favorite frame from the film. After the noise and activity of the spike room, it grows quiet as our three heroes make their way to the temple of doom. This long shot, a matte painting, is so well lit and composed, it shows in a subtle fashion the danger our heroes are walking into. The jaws of death are quite literal. ILM's matte painting department was at its peak here. And those painters, who included artists like Craig Barron, Caroline "Jett" Greene and Michael Pangrazio, had to have been burned out from having just completed Return of the Jedi a year earlier. That movie was filled with groundbreaking matte paintings, and they were back at it on Doom, only much more earth bound on this project. The matte department is one of many that shine in this film.

6. Indy has been captured and it doesn't look good. At all. Harrison Ford's level of acting in this film is something to behold. He plays the part of Indy with well-balanced bravado, intelligence and courage. But in this scene, inside the small jail cell, he looks so defeated when talking to Shorty and the two other child captives. He might go from one bad situation to another constantly, but in this moment, he doesn't see a way out. It's scary, as an audience member, to read Indy's fear in this moment.

7. The darkest moment of the darkest Indy film. Right here. The Blood of the Kali is taking its hold on our indestructible hero, and Indy would emerge in a state like nothing seen in him before or since. This still gives me shivers. The candles and wax, Indy's uncontrollable cries, man. It's a tough one.

8. In my Raiders post, I discussed Signature Spielberg Shots. This film has lots of them, but this one is my favorite. Indy has returned from his own version of hell, has defeated the first wave of opponents and is freeing Willie. Shorty takes in the action, framed just off-center. Spielberg would construct a shot of Indy identical to this in Last Crusade. It's the shot where he walks into the Grail Knight's chamber near the end of the film. I have always linked those two shots together. I honestly don't know if in Spielberg's mind there was to be a link between them, but they are composed identical to one another. One of those brief moments I love.

9. Indy the Hero. He is never more heroic than he is in this film. A hero is someone who cares about someone or something larger than him or herself, dedicating one self to a bigger cause, at potential peril to one self. Indy didn't have to hesitate after swiping the three Sankara Stones. He could have bolted, leaving those kids to slavery to the Thuggees. But he went back, at great personal cost. But as Indy does, he walked through the fire. Her, we see him unlocking the childrens' chains, becoming the fullest version of the hero we already know him to be, even though he hadn't really reached this level yet.
When I was growing up, I always wanted to be a hero to someone, or to many "ones." I looked at this scene as one way to do it.

10. Bad guys falling to their death down a cliff. We saw it during the truck chase in Raiders, and here, we finally see Mola Ram get his just desserts after he falls from the rope bridge into a pool of waiting and hungry alligators.

Brad’s Escapism Moment in Temple of Doom
Indy's hero status reaches a crescendo here, in the epilogue scene as the children of the village are reunited with their parents. This shot, of the father clutching his son, always strikes a particular chord with me. The child wasn't much younger than 11-year-old me when I saw this movie with my dad in 1984. My observations of parental love, as shown on TV and movie screens to that point, felt like they emphasized a mother's love of her child far more often than a father's love. This shot shows pure fatherly love for his child, and I understood, in a new way, how much my dad loves me.

Temple of Doom is the most emotional Indy experience for me, outlined both here and in my first guest post for this site. It marked the end of an era of my childhood in a similar way Return of the Jedi did a year earlier. The conclusion of this film began a five-year period where we had no films that sparked my imagination the way Star Wars and Indiana Jones did. Spielberg made quality films, of course, between 1984 and 1989. Harrison Ford earned his only Oscar nomination in 1985 for Witness. John Williams scored six films between Temple of Doom and Last Crusade. George Lucas retreated from public life following his harrowing divorce, though he did stay involved in a mixed bag of projects like Captain EO, Howard the Duck and Willow, none of which got onto my radar. It was a dark time for me personally, not that I attribute that solely to the absence of Star Wars and Indiana Jones in those five years. But Temple of Doom will always hold a soft spot for me because of the end it represented, and the happy hindsight-enabled knowledge, that it wasn't really the end afterall.

Coming next: E.T.: The Extra Terrestrial