Next up is the long-awaited conclusion to the original trilogy, Indiana Jones and the Last Crusade (1989). 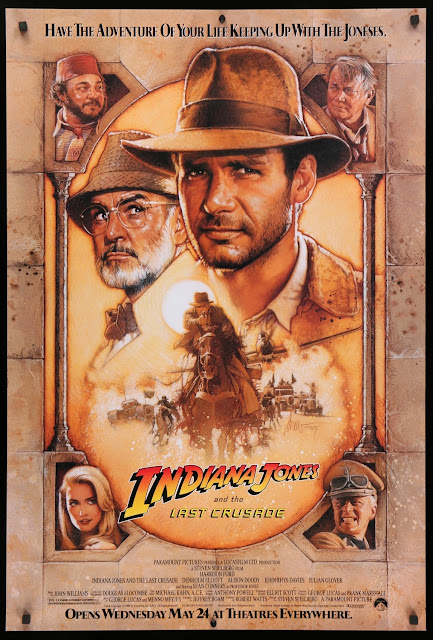 Last Crusade - An Introduction
I can't, and I won't, rank the films of the Indiana Jones franchise. I am too attached in too many unique ways to those first three. Today, I tackle a more mature Indy, and corresponding film, Last Crusade.

This film shares a lot of story beats with Raiders of the Lost Ark, and purposefully so, according to filmmaker Steven Spielberg. He says he missed the prevailing tone of Raiders after Indy made his trip to hell and back in Temple of Doom. Raiders and Last Crusade share links that can also apply to Star Wars and Return of the Jedi.

Last Crusade takes the battle against Nazis more to the front lines. Indy squares off directly against high-ranking party members. We make a quick trip to the book burners in Berlin. The stakes feel amped up a bit from Raiders, as we search for the Holy Grail. But, as Spielberg often does, this film isn't about the Holy Grail. It's about the search for a re-connection between father and son estranged. The search for one begets the search for the other. And over the course of that search, we are treated to humor, gags, high adventure, and a warmth that made this another instant classic.

Similar to my post about Revenge of the Sith, I'm skipping my analysis to late in the film. There's so much to unpack in Last Crusade's final 40 minutes, I didn't want to sacrifice all this great stuff to spread out my list equally in the film's previous hour and 20 minutes. Now of course there's amazing material there, like the opening teaser, set in 1912 with young Indy, the battle for the Cross of Coronado, the introduction of my favorite Indy leading lady, and the fierce fight on the tank. Which leads us to...

1. ...part three of bad guys falling off a deep cliff to their death. We saw examples of this in the first two films, and I went into this one just waiting to see which bad guy would fall off a near-bottomless cliff. In this case, it was the most imposing Nazi, General Vogel, taking this dive along with his tank after losing a fistfight with Indy.

2.John Williams. He absolutely shines in this movie, especially with his new theme for the Holy Grail. This particular shot is a real soundtrack highlight. It's magical as our heroes arrive at the temple embedded within the Canyon of the Crescent Moon, which contains the Grail. I got shivers when I first heard this, and it's an example of music and visuals entering into the perfect partnership. Only this exact music could match this exact scene. It's sweeping, epic, mysterious and hints at the danger to come.

3. Wow, what shot composition here! The bad guys, as almost always, are staged on the left while the good guys are on the right.
But here, I take particular note of Dr. Elsa Schneider as she moves to the middle. It's truly the ideal positioning for this character, who vacillates between "good" and "bad" throughout the film. And look at her wardrobe. Dark and light meshed together. Perfect representation of her character.
Elsa is my favorite Indy leading lady, and it's not even close for me. She's smart, tough, credible, but conflicted. She sees the Grail as a prize to be cashed in on rather than one used for conquest, as her Nazi cohorts do. But she also has obvious affection for the Joneses. She's torn between two causes, but as we see later on, she finally makes her choice when it's needed most.

4. The three challenges. We get more than a hint of the supernatural here, but it feels completely appropriate, and little suspension of disbelief is required by the audience at this point. How are sharp razors fully functional in this temple? Why would Indy fall to his death if he steps on the letter "J" instead of "I?" Faith.
Through two films, we don't get that strong of an idea of the faith of the character of Indiana Jones. Only now, at the climax of the trilogy, does Indy embrace his faith, and he is rewarded. So powerful, and more superb acting by Harrison Ford.

6. This shot is composed identically to one of Short Round in Temple of Doom. That scene takes place after Indy has his spell broken by Shorty, and together, they dispatch the Thugee guards on the sacrifice stage in the temple of doom. Shorty runs up and stops short as Indy undoes the chains holding Willie to the sacrificial cage. Think of that shot, detailed in my Temple of Doom post. Now compare where Shorty is in the frame to Indy of the shot above. They're the same.
It's another Signature Spielberg Shot, as Indy looks on at the Grail Knight for the first time, a mix of wonder and determination in his face.

7. Elsa making her choice. She has an almost wild look in her face here, as Donovan entrusts her to pick the correct chalice to drink from in order to gain eternal life. We still aren't sure of Elsa's intentions at this point, and this momentary look of crazed power, left me with even more questions. Terrific nuance and detail.

8. "He chose...poorly."
What a great line, cleverly delivered by Robert Addison as the Grail Knight. It got strong laughter from the audience in the theater. Who knew in 1989 that this image would be endlessly used for meme material in the 21st century. It could carry even more relevance with tonight's NFL Draft.

9. I knew Sean Connery played James Bond. That was about it before I hit the theater to watch Last Crusade. But he made s strong impression on me with his terrific performance. This shot is full of nuance and detail, as he disbelievingly clutches the Holy Grail for the first time.
Professor Henry Jones is quite dismissive of Indy through most of the film, but here, we see nothing but total respect. Henry's shoulders sag a bit as he holds the grail to his chest, having just seen it heal his gunshot wound. We feel the weight of his 40-year search for this object, recovered for him by his son.

10. One final show of respect, in this salute from the Grail Knight to Henry and Indy. Again, we're applying some supernatural abilities to the knight here. How could he have known they made the choice to leave the grail where it was, in the below-ground wreckage of the destroyed temple? One does not get to be 700 years old without having a trick or two up his sleeve.
I also saw this shot as a goodbye to the Indy audience. I don't know if Spielberg and George Lucas were that meta with this scene, but that's how I saw it. And nearly every time I watch this film, my instinct is to wave back at the Grail Knight - AKA Lucas, Spielberg and Williams - and say "thank you."

Brad’s Escapism Moment in Last Crusade
The greatest closing shot in cinema history. The heroes ride off into the sunset. I know sometimes Spielberg is accused of being a bit too sentimental with some of his films, especially in how they end. But look, we all know what we're getting into when we go to a theater. The whole point is, we want to escape. Reality is reality. And there's plenty of bad reality all around us today. We as an audience want to suspend our disbelief To trust and believe in Indiana Jones, one of the ultimate heroes of all time. So we get a Hollywood happy ending. Damn right we do.

As I wrote in my previous Indy entries, I am conflicted on which Indy film is my favorite. It is inconclusive enough to me to believe that I should not rank them. Each tell its own story, each has unique strengths and a unique personality and style about it.

Last Crusade is Indy at his most enlightened and most sophisticated. Last Crusade as a film is a classic father-son tale, in which the searcher and the finder alternate roles throughout. It is meant for a more mature audience than Temple of Doom. Sixteen-year-old me that saw Last Crusade on opening weekend in May 1989 had grown up a bit since Temple of Doom, and the franchise had followed suit. It's a phenomenon just like Star Wars, in that the films grew as we grew. The films became more sophisticated, and characters matured along the same path as we did. That helped us become more emotionally invested. Same thing happens with the original three Indy films.

Last Crusade also brought me back to some of my friends, who I had missed in the five years since Temple of Doom. Names like Ben Burtt, Dennis Muren, Frank Marshall, Kathleen Kennedy, and of course, our three heroes, George, John and Steven. Nothing much hit my imagination in that Indy/Star Wars way since Temple of Doom came out in 1984. And I endured some difficult years personally in the interim. So Last Crusade was a gift to me. A reward for making it through those torturous years between ages 11-16. It was the Holy Grail I had been looking for.