Next up represents Steven Spielberg's return to the director's chair after a four-year absence, The Lost World (1997). 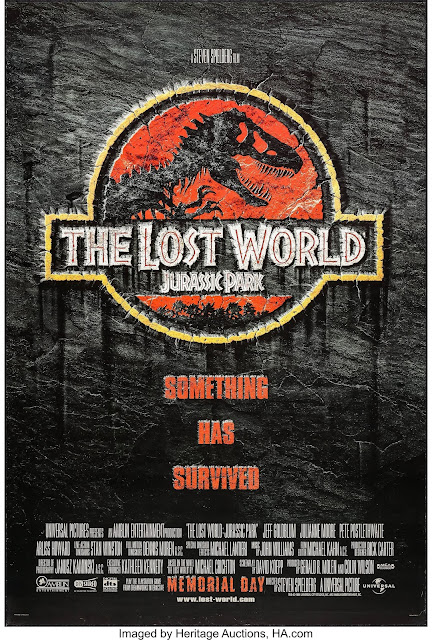 The Lost World - An Introduction
There was a ton of anticipation for this film when it hit in early summer of 1997. As is famously known, Steven Spielberg took four years off from directing after the one-two punch of Jurassic Park (1993) and Schindler's List (1993). In my mind, the experience of making those two particular films so close together took such a toll on the man that he NEEDED four years off. If anyone deserved a break of that length, it was certainly Spielberg.

He ended his hiatus with a return to the land of dinosaurs in The Lost World. The first sequel to Jurassic Park took us to a literal and figurative darker setting. Most of the film takes place at night, and the wonder of the dinosaurs is replaced with a higher quotient of danger and death, compared to the first film. I realize this doesn't land on my favorite lists, there is plenty good to unpack as the franchise begins to discover its legs, as long as they aren't broken. 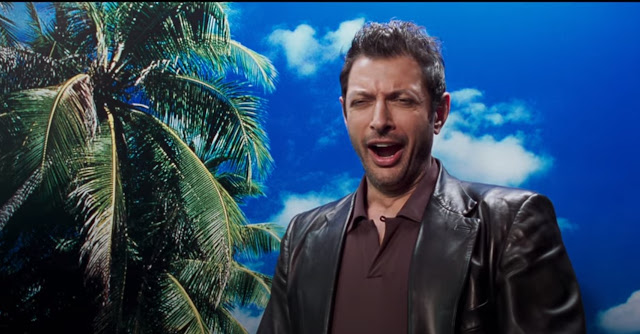 1. TLW is filled with what I consider to be Signature Spielberg Shots. The one above is the first. We see the transition from the mom screaming on the beach, as her daughter is overcome by Compys, to Dr. Ian Malcolm yawning on the subway on his way to meet with John Hammond. 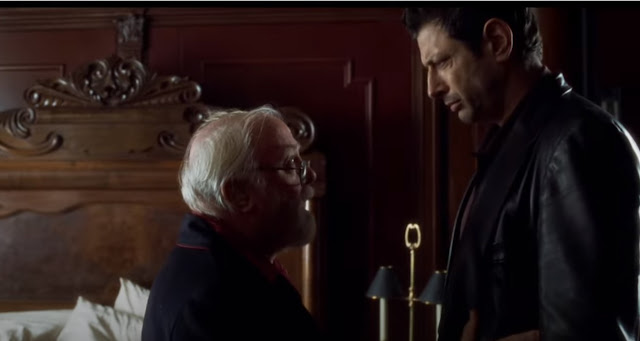 2. For some reason, I'm always struck by the height difference in this shot between Malcolm and Hammond. Hammond lifts his right arm straight out, and it barely hits Malcolm's waist.
The inclusion of Hammond was a wonderful decision by Spielberg, and I am thankful Sir Richard Attenborough agreed to it. Hammond and Malcolm clashing in their contrasting styles provides a strong and early callback to JP, and this scene, not only sets up the plot, but gives the audience an easy introduction into chapter two in this franchise. 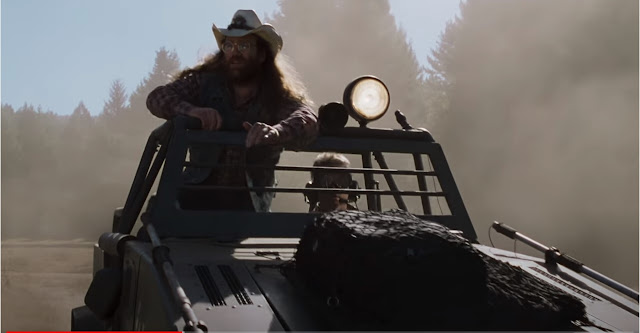 3. Dr. Robert Burke - bearded naturally - is my favorite member of the InGen task force. He gives the group some credibility when it comes to dino knowledge. It's rather apparent quickly that this group is financially motivated. Anytime the camera turns to him, he quickly rattles off relevant statistics about each species. I particularly enjoyed his exchange with Dr. Sarah Harding when they disagree about the behavior of the Tyrannosaurus Rexes after the trailer attack. They battle to a verbal draw, but both command respect with their intelligence. Sadly, Burke does not survive to the end of the film, but he's a character I always look forward to appearing on screen. 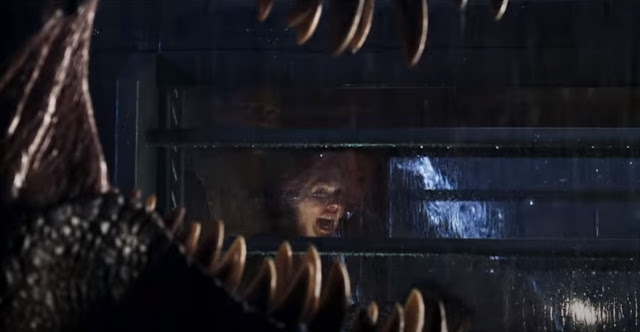 4. Here we have another Signature Spielberg Shot. At the beginning of the trailer destruction, we see one of the T-Rexes scream as Dr. Harding tries to hide in the trailer. The teeth frame the shot perfectly in a way that is perfectly Spielbergian. 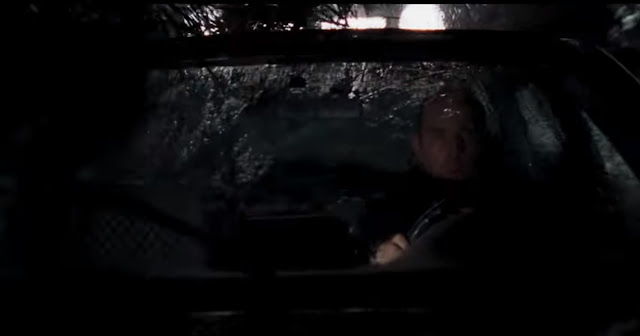 5. A word here for underrated hero Eddie Carr. This may sound stereotypical, but I'll run with it anyway. Bald/balding men tend to be cast as bumbling characters in many films. Carr fits that physical description, but he acts in a completely different way. Smart, selfless and quick-witted, Carr shines in his attempt to save Malcolm, Harding and Nick Van Owen from the falling trailer. He stumbles. He slips. He doesn't do everything right. But he's hardly bumbling as he applies his technical skill to try and rescue our heroes in the trailer.
The John Williams score is also strong here, making full use of its safari personality we hear throughout.
Richard Schiff and Vince Vaughn are two more examples of inspired casting by Spielberg's team, catching two actors just before their quick rise to prominence. Schiff of course found fame on The West Wing, while Vaughn became a signature comedic actor in the 2000s. I relate the casting of these two to the Ryan Task Force group in Saving Private Ryan (1998), which included standouts like Vin Diesel, Giovanni Ribisi, Barry Pepper and Adam Goldberg - and of course Matt Damon -  catching young actors on the way up. 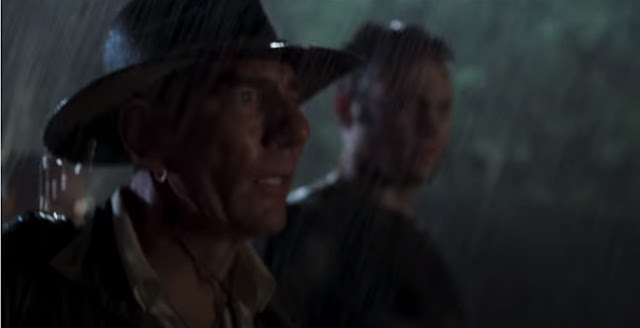 6. Spielberg has been vocal in his affection for Pete Postlethwaite, who plays a wonderful character, Roland Tembo. Similar to Dr. Burke, Tembo carries smarts and wits among the InGen group, only his motivation is much different from everyone else. He's not in it for the money, and says so in his introductory scene. He's a hunter and is unstoppable in his quest to slay a T-Rex.
But as the group makes its way to the communications center, we see there's much more to him than meets the eye. In this shot, he tells Van Owen the tale of the man who climbed Mount Everest not to die, but to live. It's a wonderfully written passage by screenwriter David Koepp, and well-executed by Postlethwaite. His is a character I wished could have returned in later entries in the JP franchise. 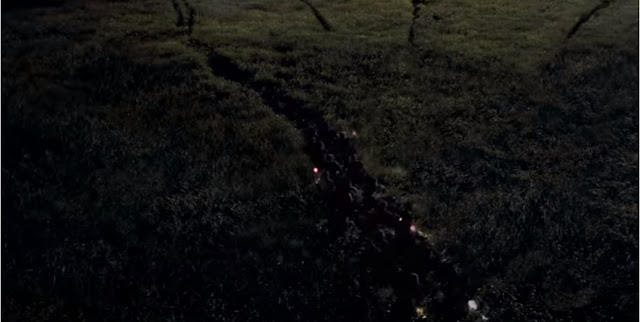 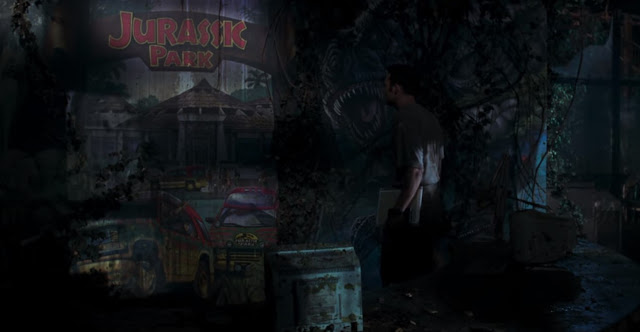 8. The original Jurassic Park theme, another incredible entry by John Williams, is completely absent through this film until this Easter Egg-y scene. Van Owen is making his way through the communications center, and sees this artist rendering of the park, as conceived four years earlier. A quick, quiet rendition of the JP theme appears here, reminding us of what could have been. 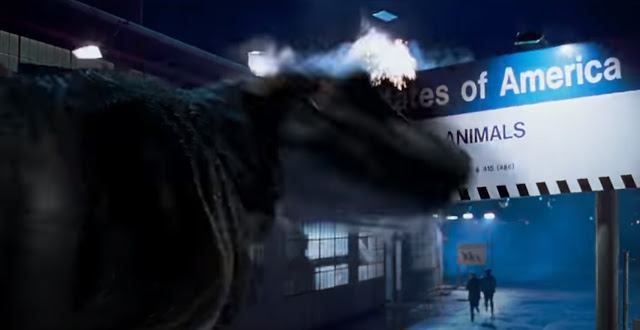 9. The last two entries here certainly quality as Signature Spielberg Shots. This one is a cousin of the shot in Jurassic Park where the T-Rex appears in the gas jeep's rear view mirror, with the message OBJECTS IN MIRROR MAY BE LARGER THAN THEY APPEAR obviously framed for the camera. Here, an animal is most certainly making entry into the United States of America. 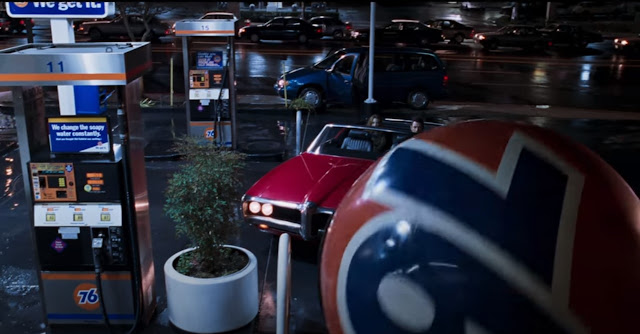 10. Are 76 gas stations even around anymore? They were in 1997, and they are captured forever on film here in the humorous sign rolling down the road, a victim of a T-Rex attack in another very Spielbergian touch. 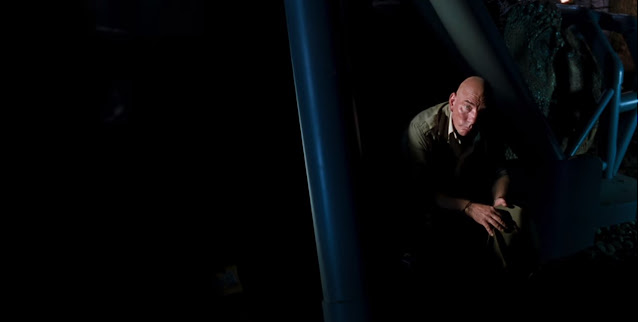 Brad’s Escapism Moment in The Lost World
The Lost World seemed like a conflicting film for fans of the director and the franchise. It's been my experience that people are quick to dismiss the film, but walk back their feelings when they are reminded that this was the last film in the franchise to involve Spielberg the director and Williams the soundtrack composer.
Spielberg was clearly trying to push TLW in a more stark direction, and not simply remake JP with different species of dinosaurs. Personally, I'm not a fan of some of the casting decisions or the writing, which feel quite out of place at times. But this is an important film to include on any list as we are working with here. It is inherently relevant because it came after Speilberg's longest directing sabbatical of his career to this point. He is clearly looking to regain his footing a bit after his unconventional, if totally appropriate methods for Schindler's List. He returns to his familiar style of filmmaking with subject matter that had success baked in. And looking back, there's a rightness about it with Malcolm being the leading character. This was his turn. Dr. Alan Grant would return in Jurassic Park III (2001) to take his solo turn at leading a film in the franchise. Word is that both Grant and Malcolm will show up in Jurassic World: Dominion (2021?), completing the circle for these compelling characters.