Soundtrack News: Intrada Give The Classic Time Bandits Their Treatment 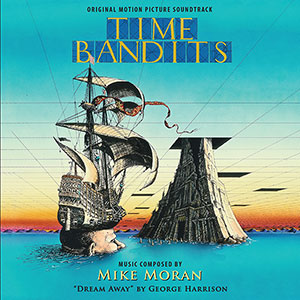 We have the latest press release from those soundtrack gurus at Intrada who have just announced they are giving the classic Time Bandits their treatment.  The music is by Mike Moran and features "Dream Away" by George Harrison.  Here's the full press release:
In 1981, two veterans of the British comedy group Monty Python—writer-director Terry Gilliam and actor-writer Michael Palin—combined the incongruous elements of god, the devil, Napoleon, Robin Hood, King Agamemnon, the minotaur, the sinking of the Titantic, two star-crossed lovers, a man-eating ogre, six thieving dwarves and the imagination of one eleven-year-old boy into the adventure classic Time Bandits. The score by composer Mike Moran has never been available before, despite numerous requests for decades. With heartfelt thanks to Handmade Films, this long-sought title is finally available on CD 39 years later! Good things come to those who wait. While the opening and closing of the score are electronic, all of the score in between features full orchestra, keeping pace with the frenetic, colorful antics and adventure on screen.  Moran composed and orchestrated his score in 21 days, with Harry Rabinowitz conducting six sessions at Wembley’s CTS Studios, featuring a 70-piece orchestra. As an added bonus, the album also includes George Harrisons song, "Dream Away."The film tells the story of Kevin, a young boy ignored by his materialistic parents, who finds his world turned upside down when his bedroom is invaded by a group of thieves who, having stolen a map of “time holes” from their employer, the Supreme Being, are using it to plunder treasure from a variety of historical locales—unaware that the Evil Genius is plotting to use their map to free himself from imprisonment in the Fortress of Ultimate Darkness.INTRADA ISC 440Barcode: 720258544001Retail Price: $19.99SHIPPING NOWFor track listing and sound samples, please visit the Time Bandits soundtrack page.