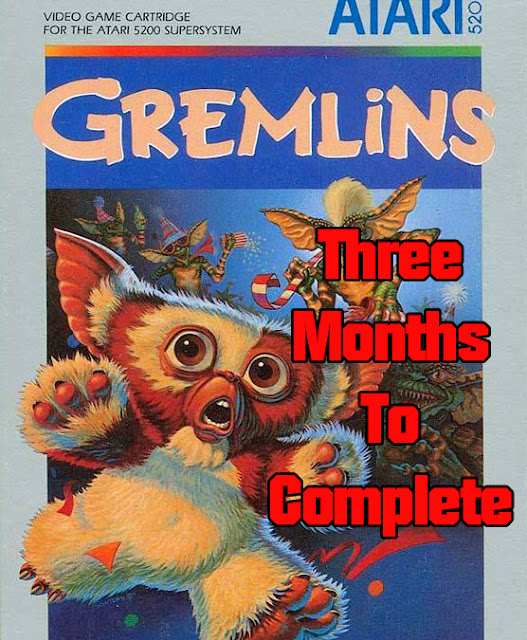 Internal Memo Shows How Gremlins For Atari Was Based On Guessing

If you loved video games in the eighties such as I did then you will know the often disappointment that would accompany a movie tie-in.  There are a few rare examples such as Batman for the Sinclair Spectrum 48K and the awesome Star Wars Arcade.  But, generally they stunk of a quick cash-in (E.T. anyone?) with poor graphics and even worse, actually having nothing to do with the movie itself.

Admittedly one of the main reasons for the game not resembling the movie was generally down to the restrictions of the hardware at the time such as the memory size.  Try fitting an Indiana Jones adventure into a few kilobytes!  Well, they did try.  However, there is another reason why the game would be completely off on a tangent and that is due to the game being developed before the actual movie came out and often, a ridiculous deadline.  This was a familiar practise with the developers, programmers and designers racing against time to get the game out at the same time as the movie release or that magical Christmas release with very little source material available. 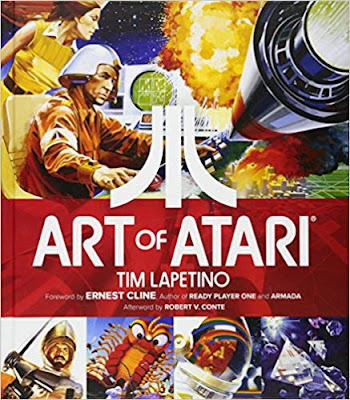 Here's a classic example.  Take a look at this memo below which I found in the excellent book, Art of Atari by Tim Lapetino.  The memo is dated the 3rd of February, 1984.  Just ten months before the actual movie is released.  The memo discusses a game based on the upcoming movie called Gargoyles which is actually the movie, Gremlins.  The memo is aimed at getting the artwork down by artist, Greg Winters who's amazing artwork would grace many Atari boxes.  The internal memo roughly explains the movie and what to expect.  You can clearly see that the game was yet to get off the ground with less than a year to go:

Indications from the producer are that Stripe will be very memorable from the movie...Gizmo's less active and offers basic huggable appeal (Baby Yoda anyone?)

You control Billy in the games, but he may be best remembered from the movie as the guy who carried around Gizmo in his backpack.  So...I would recommend making Gizmo the central character with Stripe hanging out menacingly in the background. 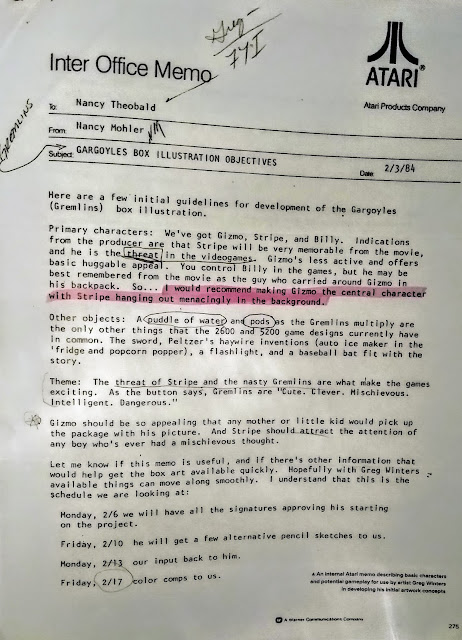 I love how there is a guideline for how cute Gizmo should be and the nastiness of Stripe:

Gizmo should be so appealing that any mother or little kid would pick up the package.  And Stripe should attract the attention of any boy who's ever had a mischievous thought (That's not narrowing it down.) 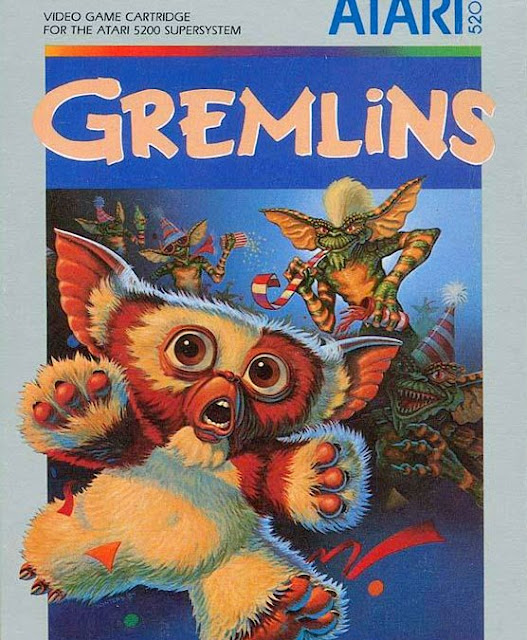 What about the game?  Well the artwork turned out to be perfect with those guidelines clearly followed.  Gizmo definitely looks cute with Stripe having that familiar nasty streak.  The game itself was released on the Atari 2600 and consisted of just two screens.  You control Billy Peltzer as suggested in the memo.  He runs across the screen catching falling Mogwai to prevent them from eating...wait for it...hamburgers.  Where was that in the movie?  I guess it has some vague connection with stopping the Mogwai from eating after midnight.

The second screen takes on a familiar Space Invaders theme where you shoot descending Gremlins.  Needless to say the game was received poorly.  A post from Atariage.com has a quote from designer, Scott Smith who ultimately only had three months to complete the game and source material purely based on a script:

They gave us a copy of the script for the movie. I was supposed to read it and then come up with a game. The cover letter said that this movie would be "just like ET" (which, as you know, was a huge hit). I read the script and considering how violent it was, I was skeptical. If you saw the movie, you know it was a) violent and b) not the hit Gremlins was. Anyway, I can't think of any huge inspiration; I just made it up. They then had us fly out to Burbank and meet with Spielberg and Chris Columbus. They heard the ideas, liked them and gave final approval. I remember thinking Spielberg was pretty intense. When he focused on you, it was clear that nothing else in the room mattered. I don't remember what he said, just the intensity of his focus.

I had about 3 months to do it. Figuring out how to write the kernel (that's my remembrance of what they called the code that followed the beam down) was really hard for me. I remember someone who sat down with me one day and finally got the light to turn on. I remember giving him $1K of my bonus (for completing Gremlins) and him being not too appreciative. I don't think I used his kernel, but I wouldn't have gotten the game done without him. I believe the kernel I used was a modification of the one he showed me.

Well, there we have it.  Three months to complete a movie tie-in.  It was never going to be any good based on the time the designers and programmers had but at least it's more playable than the now infamous, E.T. The Extra Terrestrial.  Also, the Atari 5200 version which was released two years later was a complete different game and infinitely better.  You can watch both versions below.

Were you ever disappointed by a movie tie-in video game?  Let us know in the comments. 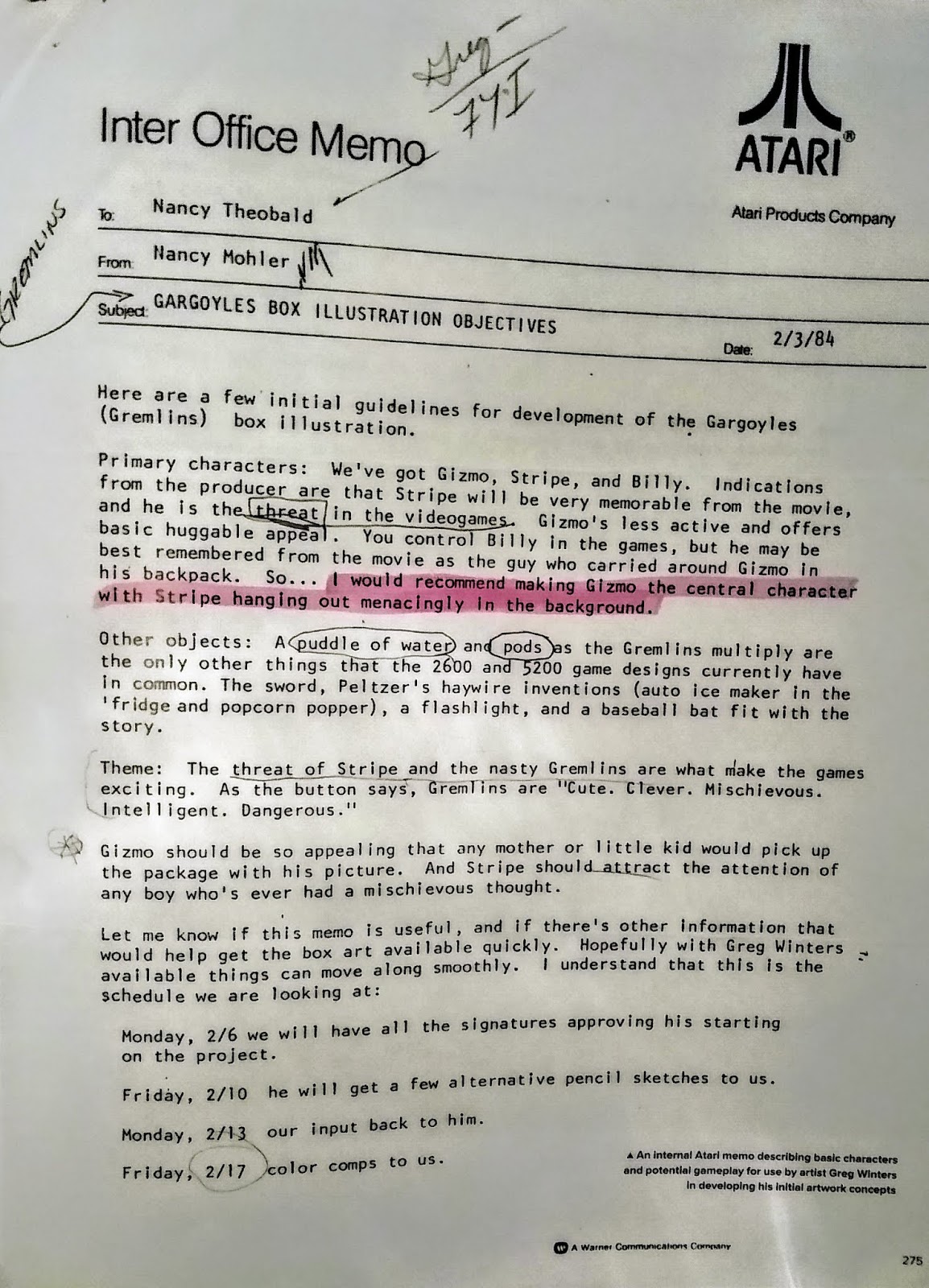