Movies In VR Are A Thing Of Beauty

Recently, I decided to enter the Oasis and bought myself an Oculus Go.  If you're not familiar with what this is, it's basically an inexpensive introduction to the world of VR (Virtual Reality.)  It's a standalone device without the needs for cables that, although doesn't track your body movement does track your head movement giving the full VR experience.  It cost me £149 from Amazon (this is not a sponsored post) and I was eager to get my first taster of home VR.  Spoiler: I was not disappointed! The model I bought was the 32gb version, enough to see me install the apps I needed and copy across a few movies from my collection.  This process is simple.  Using the standard micro USB cable that is supplied, just plug it into your PC and copy your files across.  Since I had a few Star Wars movies this was my first choice.

Next, I downloaded an app from the Oculus store called Skybox which reads files installed on your VR unit and plays them in your chosen environment from a cinema to a space station to a camp fire.  I had to choose the cinema environment and it was this that made me feel like a kid again.

I decided to watch The Empire Strikes Back so fired it up in the app and then WOW!  I was sat in a cinema with the 1980 classic playing on the big screen.  I was eight years old again and I had a huge grin on my face.  The experience was simply stunning.  I could look all around the cinema, even behind.  You would swear the chairs are real and I even tried touching one.  Even the glow from the cinema screen reflected on the walls in the correct way according to what was on the big screen at the time.  The sound quality from the built-in speakers are actually quite impressive giving a kind of 3D effect.  You can use your own headphones if you wish as there is a 3.5mm jack built in.  A fully charged battery will give you around two hours but I had a small rechargeable battery pack connected while I was watching which allowed the headset to stay at 100%.

I've been eager to get my own VR headset for some time but been put off by how bulky and awkward they look due to the cables and the beefy machine required to power the headset.  The Oculus Go was a perfect introduction for me and I wasn't disappointed.  Watching Star Wars on the big screen was a genuine treat.  It's not quite the Holodeck but you do feel like you've been somewhere else. even if you have been sat in your own room.

I've also been using the headset to watch Netflix and Amazon Prime.  The latter also gives you a cinema to watch your favourite shows where Netflix gives you the option of watching their shows either in a grand lodge or a void with no distractions.  I watched the whole series of The Witcher in this environment. 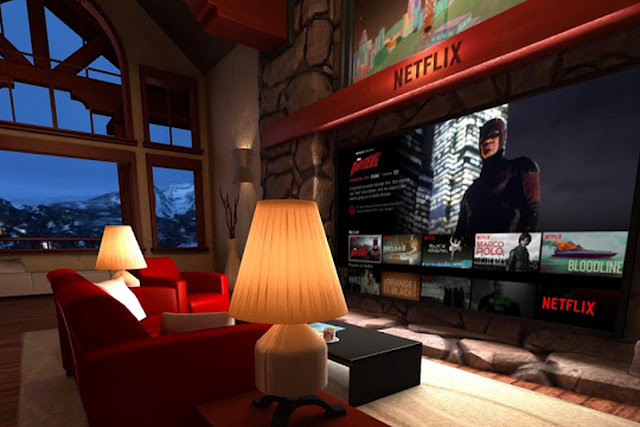 There is a slight disappointment that I can't find any store where I can legitimately watch 3D movies as I was hoping I could find Ready Player One in 3D to watch.  They've missed a trick there.  Anyway, I did fire up the YouTube VR app and was watching the trailer to the movie along with a few others.  The 3D effect is rather good but the effect is really shown off in the free Jurassic World app called Blue where you follow the Raptor on a journey.  Along the way you meet a T-Rex and others from the world of Jurassic World.  It really transforms you to another world and a good example to show off the world of VR to family and friends (although the Apollo 11 launch was a big hit with my family on Christmas day.)

It really is easy to use and the little hand controller provided shows up in the VR world allowing you to navigate with ease.  As I say the Oculus Go is a great way to enter the world of VR for the first time.  It won't give you 4K quality, but the picture quality is still high and you will forget that anyway when you're sitting in the cinema.  Within a few minutes, you will forget you are wearing a headset (even someone who wears glasses like me) and you will be wondering where you put your popcorn.

Have you watched a movie or TV show in VR?  What did you think?