Should We Embrace The Deepfake Technology Or Be Scared? 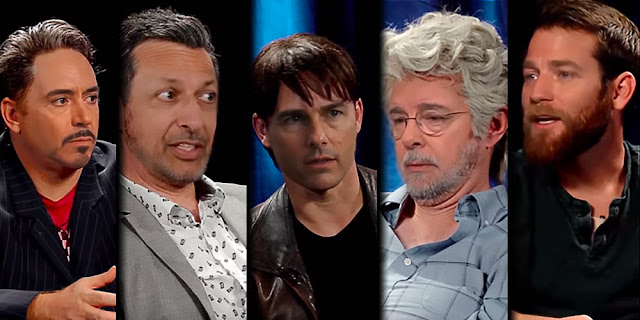 A CGI George Lucas?  Have We Gone Too Far?

How far is too far?  That's the question I've heard and seen recently being asked regarding CGI versions of real people.  Whether it's a CGI version of James Dean, actors in a Star Wars movie or the latest YouTube craze called Deepfake.

What is Deepfake?  Well Wikipedia tells us "media that takes a person in an existing image or video and replace them with someone else's likeness using artificial neural networks. They often combine and superimpose existing media onto source media using machine learning techniques."

In short, it's using CGI to make it look like someone you know is on screen.  Here's an example.  In the video below you can watch an interview conducted by Mark Ellis (he is real.)  The other celebrities in the room are not.  Jeff Goldblum, Tom Cruise, Ewan McGregor, Robert Downey, Jr. and George Lucas all appear to be talking about the status of streaming and what it means to them.

There's no denying that this is highly amusing, especially some of the answers by George Lucas and whoever is doing the impressions has to be congratulated.  However, is this technology gone too far or is this exciting times?  On the negative side this technology could easily be abused and harm individuals and their legacy.  On the positive side we could see it used to continue a movie franchise way into the future.  Imagine seeing a young Indiana Jones back on screen or even a new episode of Columbo?

Some have already shown their concerns but those same people were loving the return of General Tarkin in Rogue One or a young CGI'd Carrie Fisher.  Watch the full video below and let us know what your thoughts are about this latest trend.