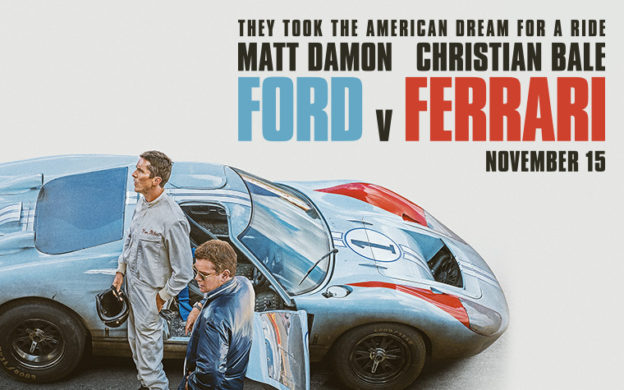 In 1963, desperate to be a modern sensibility to their image, the Ford Motor Company approached Enzo Ferrari to propose a buyout.  The negotiations were cut short when Enzo suddenly realized that the deal included the purchase  Ferrari's racing program, the champions at the 24 hours of Le Mans for 10 years running. Not one to accept defeat, Henry Ford II directed his team to build a race car capable of winning Le Mans.


Enter Carroll Shelby (Matt Damon), the legendary automotive designer, who recruited the one driver he felt was up to the task: Ken Miles (Christian Bale), a brash and fiercely determined British race car driver and World War II vet who had a reputation for not working and playing well with others. Together, Shelby and Miles would lead a team of American engineers and designers to create the Ford GT40 for a showdown at Le Mans.

Ford v. Ferrari isn't anything ground breaking, and it's certainly not the deepest or most through provoking movie of the year. But too often these days, I find myself becoming one of those folks who say "they just don't make movies like they used to", and this is a movie like they used to make 'em. Director James Mangold (Walk The Line, Logan) is as skilled a craftsman as any working in film today, and he knows how the create compelling human drama. This characters are well written, and the movie would work well enough as a feel good sports picture with far lesser lead actors than Damon and Bale, but with them, it becomes a classic of the genre. The two superstars make such a good on screen pair that comparisons to Redford and Newman are inevitable, and each actor disappears into his role with ease. The supporting players are all well cast, with Catriona Balfe, Ray McKinnon,Jon Bernthal and Noah Jupe all giving standout turns. While Josh Lucas is back to play the kind of sneering, snivelling creep that he was known for in the early '90's, there are few actors who take a character that at time plays Frank Burns as portrayed by Paul Lind and make it actually work, but Lucas and Mangold make it play.

Ford v. Ferrari is about as good a piece of smart, slickly made and fast paced entertainment as one could ask for, and a welcome reminder during the present debates on the subject that a movie doesn't have to be about superheroes and special effects to light up the big screen.