Movie Review: "A Beautiful Day in the Neighborhood" Is The Movie We Need 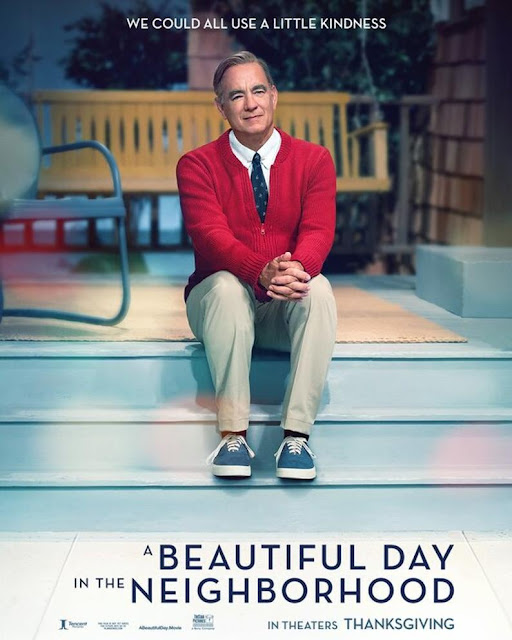 A BEAUTIFUL DAY IN THE NEIGHBORHOOD

Fred Rogers (better known to most of us as Mister Rogers) can't be an easy character to play. It's been 16 years since the children's television icon passed away, and by now he's typically remembered with respect and even reverence, which is well deserved. But many of us remember a time in the 1980s and '90 when he was a popular target of comics and impersonators, who caricatured his gentle mannerisms and tenor voice as syrupy or effeminate. Trying to capture the mannerisms and  voice of such an icon is always a difficult task for an actor, and it;s even harder when the actor is iconic in their own right. Two-time Oscar winner Tom Hanks certainly qualifies as iconic, and while he seems like the only possible choice to capture Roger's niceness, he's not usually known for Daniel Day-Lewis like transformations. As such, it's astonishing and delightful to see beloved star Hanks so completely become beloved star Rogers, capturing the outward mannerisms and inner soul of the man to near perfection. It takes a lot to count as a career highlight for Hanks, but this is right up there with his best work, and if it doesn't land him his first Oscar nomination since Cast Away it will be hard to take the awards seriously this year.

Happily, A Beautiful Day in the Neighborhood isn't one of those cases where an Oscar-bait performance is surrounded by an otherwise lacklustre film (Rami Malek and Bohemian Rhapsody, we are looking in your direction.). Director Marielle Heller (Can You Ever Forgive Me?) has crafted a sweet, low key and moving film that easily ranks among the best of 2019. While Rogers is certainly the dominant presence in the film, the real lead is Matthew Rhys as Lloyd Vogel, a cynical and emotionally damaged investigative journalist assigned by Esquire magazine to do a profile on Rogers for an issue about heroes. While interviewing a children's television host seems like the sort of puff piece Lloyd doesn't usually do, Rogers is the only subject willing to talk to him. And on top of all of this, Lloyd is dealing with a being a new father, and also with his own estranged father making an unwelcome attempt  to reconnect with him.

As Lloyd reluctantly agrees to interview Rogers, he finds the beloved star to be as nice as he he is on TV. But to the hardened reporter, this feels suspicious rather than reassuring. Lloyd is used to a world where kindness is skin deep, and find Rogers a little too good to be true. So he continues after the initial meeting, trying to look deeper to get to really know and understand the man (Lloyd's wife admonishes him "Please don't ruin my childhood.").

While the film belongs to Hanks, Rhys isn't getting nearly the attention he deserves for his excellent turn here.  The Americans proves he's ready to move into taking the lead in feature films, and as the lead character whose arc the film follows, he's as as crucial as Hanks is to making it work. Thankfully, his acting is supported by a screenplay which makes Lloyd a compelling, genuine and highly relatable character. He's not really a jerk, just a guy who has been damaged by life. Rhys makes every moment of Lloyd's journey ring true, and allows us to understand and see where he's coming from both when the character's actions are sympathetic and when they're not. The rest of the cast is more than solid as well, and it's a shame that the great Chris Cooper is all but certain to be ignored for Oscar consideration by being in the same category (Best Supporting Actor) as Hanks (who looms large over the film even when he isn't onscreen.).


Director Heller makes some bold choices that could easily fail if the audience approaches the film with any degree of cynicism, such as doing establishing shots with models that look like those Rogers used to construct his television neighborhood. But these choices pay off beautifully, helping us enter the mind and heart of the man who brought so many of us countless hours of childhood joy, and supporting the theme that Mister Rogers really was the kind and gentle friend we saw on television.

At a time when people are seemingly more divided than ever and kindness seems to be barely recognized as a virtue, A Beautiful  Day in the Neighborhood is much more than just another Oscar-bait drama where a star gets to show off by impersonating an icon. It's a movie that reminds us that all people are people, and gives a glimpse at a better state of being. It's the movie we desperately need right now, as Mister Rogers is the role model we need. And it wouldn't work if Rogers were played by anyone other than an great actor who radiates a similar niceness and sincerity onscreen and off. It's an inspired piece of casting that leads to a stunning performance and an exceptional film.