4DX - What Is It And Would Spielberg Approve? 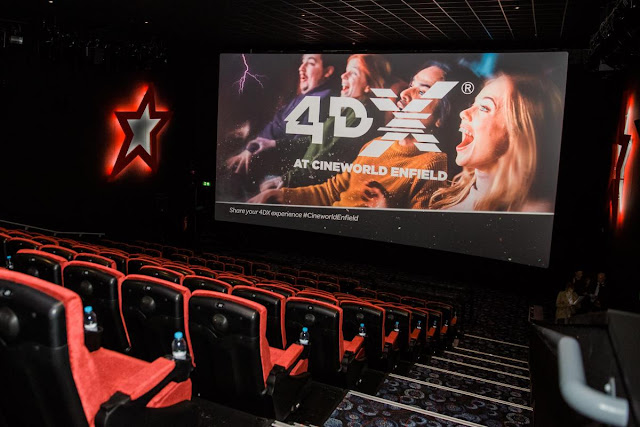 Will 4DX Shake Up The Cinema Experience?

A few days ago I was lucky enough to attend a gala opening of a 4DX screen at Cineworld, Spytty in Newport South Wales.  Actually, the cinema is the first in Wales to not only have a 4DX screen but a Superscreen and Screen X too.

What is 4DX?
But I was there for the 4DX and this would be my first taste of this latest experience.  So what is 4DX?  Well, if you've been to a theme park and you've been in one of those special movie showings  like the Terminator at Universal or The Muppets at Disneyland where you feel the chair move, get sprayed with water and have wind blown in your face then you are only half way there.

I say half way there because the effects that you experience for a movie at Cineworld seem to be more clever and intense.  I was there to watch Midway from the ID4 director, Roland Emmerich so I was expecting a lot of dog-fights and ocean scenes.  I was not disappointed.  A plane would bank and the chair you were sat in would feel like it's banking too.  Sea spray being shot up from gun fire you would feel on your face.  An engine on fire and the mist would appear in front of the screen.  The wind would not only be passing you by but from behind and on your feet.  There was supposed to be smell too but I couldn't say whether this was working.  Apparently there is a snow machine too which I heard come on a few times as there was one scene with snow but I didn't see any.  Maybe this was me sitting near the front. 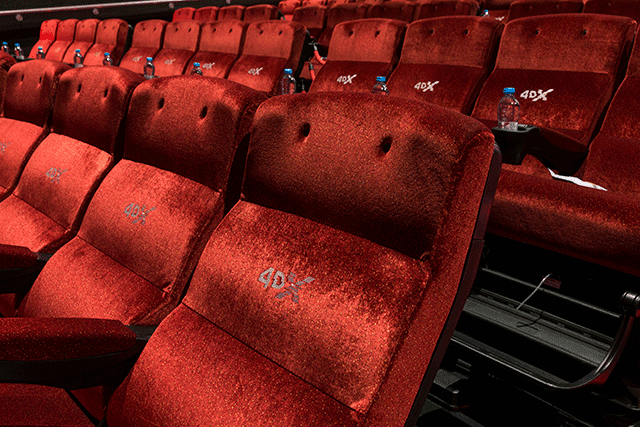 Watching Midway in 4DX
I will confess something.  Before I turned up at the venue I had doubts about this whole 4DX experience.  I wondered whether it would be a distraction to the movie.  In the past, I've always enjoyed a 2D viewing of a movie over a 3D viewing as I found the effects were a distraction.  I also wondered how some movie directors would react to seeing viewers being bounced around and getting drenched.  What would they think if their movie that they spent years bringing to the big screen was actually being viewed in this manner?  After all, Steven Spielberg doesn't even like doing director's commentaries because he felt it was a distraction to the movie.

My thoughts were compounded in the first twenty minutes.  We were treated to a few movie trailers.  One for Ford V Ferrari and I must admit that this being my first experience with the chair made me feel whether I could cope with this for two hours.  The bumps and bangs were more violent than I could possibly imagine.  No hot drinks were allowed and I immediately understood why they had this restriction.  The second trailer was for Star War: The Rise of Skywalker and this calmed my nerves a little, being a more familiar franchise and knowing what to expect from the trailer.  It was nice to actually feel a Lightsaber being switched on accompanying the visual and audio delight on screen.  Frozen 2 was next and this was a little more tranquil.  I was slightly disappointed that I couldn't see any snow.  Again, I could hear the machines above but nothing was coming near me if they were working.

Obviously, I wasn't the only one experiencing 4DX for the first time.  The reactions all around were a mixture of laughter and amazement at the senses being overloaded.  I wondered if a World War II movie was going to be suited to this experience and whether the audience, myself included would appreciate the story two hours from now or feel like this is a ride more than a viewing experience.

I shouldn't have worried.  The movie began and after a frantic opening scene at Pearl Harbor, the movie was back as the prominent factor in the room.  The chair moving, the water sprays and the mist were there but instead of a noticeable addition, these effects were now complimenting the movie and the viewing experience.  I was surprised how quickly you forget about the 4DX and let it become part of the overall movie experience.  I particularly like the subtle effects more than the more obvious ones.  The slight rock of the chair when there's a scene on a boat.  You feel like you are on the sea.  There was a scene with an American flag fluttering in the wind, this is accompanied by a slight breeze in your face.  These nice touches really do work.  Of course, the huge dog-fights in the movie and especially the nose diving planes were accompanied by a slightly violent rocking chair, wind and bumps in your back.  I did, at one point get that feeling I normally only get on a roller-coaster.  But that's the point.  The scene was always designed to be exciting, to evoke an Adrenalin-pumping moment and 4DX helps you get there quicker.

Conclusion
By the end of the movie I felt like I had been on a journey, not a ride but a movie journey.  I was there at the battle of Midway and having left the auditorium I really did feel like I was in a different world for two hours.  It was fun, it was clever and once you get used to the experience it was a huge asset in the way you view a movie at the cinema.

I am converted.  Some movies are certainly made for 4DX.  Midway is one of them.  It helps that it is actually a fantastic movie with some of the best dog-fights I've seen in years.  But I can only imagine what a movie like Star Wars will be like and I can't wait to experience it in December.  The only problem I have know is I don't want to go back to normal viewing when it comes to the appropriate movie such as Star Wars or a Marvel movie.  Anything other than 4DX is going to feel a little flat.

Imagine watching classics such as Jaws in 4DX?  Oh!  Please, someone make this happen.

Huge thanks to Cineworld for giving me the chance at experiencing 4DX.  Have you watched a movie in this format?  Let us know what you thought of the overall experience in the comments below

4DX. Ah, how I'm waiting to experience it again.... on a snowy New York day last year, ended up 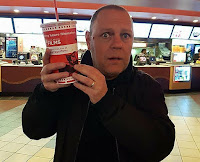 having hot chocolate at Max Brenner across the way from the cinema and decided on watching Ready Player One.. 2D? 3D? 4DX? What's that all about?! Armed with my medium coke (😳) it was apparent from the start that it was going to work. The gentle movement of your chair to the panning of the camera... nothing has happened yet but my god, you can sense what is coming. And prepare!  This review from Rob is superb and exactly right in the detail. From the swaying and spraying to the wind and rain effects that a 4DX experience brings. And the back punching in the more action packed scenes -although effective- is sometimes a bit too much. I wouldn't go to see Rocky in 4DX! My next experience will be Star Wars and I am very much looking forward to taking a few in the ribs for that! And note to self, watch that food and drink. Any of it. It will go flying!
Chris.