Movie Review: "Tell me Who I Am" is Haunting, Devastating and Surprisingly Uplifting 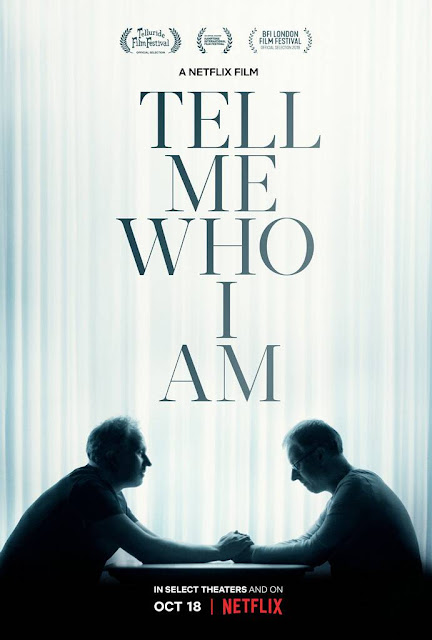 TELL ME WHO I AM
Starring Alex Lewis, Marcus Lewis
Directed by Ed Perkins

The most compelling movie of the year is a Netflix premiere, but it's not The Irishman, Dolemite Is My Name or Marriage Story. It's a little documentary about twin brothers Alex and Marcus Lewis.

Tell Me Who I Am chronicles a dramatic true story that would seem far too lurid to believe if it was fiction. At the age of eighteen, Alex Lewis was in a motorcycle accident that left him a head injury and the loss of his memory. The only thing Alex could remember was his twin brother, Marcus: everything else, including the rest of his family was gone. He didn't recognize his own mother, or have every memories of who she was. The only person, the only anything that Alex had to cling to was Marcus, who took on the monumental task of giving his brother back his life and his memories.

Director Ed Perkins became fascinated with the Lewis brothers after reading their memoir, in which they chronicled their harrowing story. As Marcus leads Alex back into his past and his identity, he took some liberties and shortcuts on the journey. To put it simply, Marcus lied. He gave his brother only positive memories, leaving out the dark and deeply disturbing truth of the horrific childhood that they had experienced together.  The house that the lived in with their mother, stepfather and two younger half siblings held unspeakable secrets that Marcus sought to shield his brother from, and succeeded for two years, until a strange and unsettling discovery brought it all crashing down.

The story of Tell Me Who I Am is  packed with more mystery, twists and melodrama than a Robert Ludlum novel, and Perkins constructs the film as a puzzle that needs to be pieced together. We see some very harrowing moments play out as they are really happening, as the brothers sit down for the first time to discuss things they have literally never talked about before. It's easy to accuse the film of a certain voyeuristic exploitation, but it's ultimately justified by the importance of the story and the message of love and healing. The brothers agreed to make the film to find closure for themselves, as well as in hopes that their story could inspire others to open up about their own traumas.

No unlike 2018's brilliant documentary Three Identical Strangers, this film seemed to speak to me directly on a very personal level. As an identical twin myself, there was an immediate sense of connection and understanding of this unique relationship dynamic and the feeling of having a literal other half of yourself `that may be beyond total comprehension to many viewers. I freely admit that the the personal connection I felt effected my feelings about the film, but I refuse to see that as a negative. One certainly doesn't have to be a twin to be swept up by this story, and the filmmaker himself isn't one.

Tell Me Who I Am isn't always easy to watch, and the most heartbreaking and upsetting elements of the story may haunt you indefinitely. But the uplifting spirit of love that Alex and Marcus share stuck just as powerfully for me, and that is what this unforgettable movie truly about: love, and the unbreakable bonds that come with it. It's also a strangely beautiful story of survival.