A Retrospective Look Back At The Movie STARCRASH 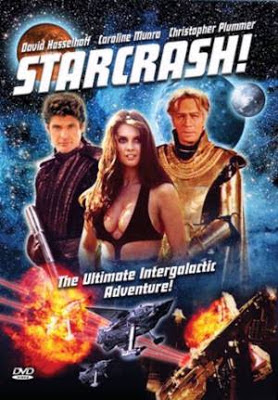 Taking us back to the early 80's is Rhys Thomas who reminisces about a classic and often forgotten sci-fi classic, Starcrash.

Flicking through the DVD's in a local second hand shop I stumbled on one I'd never seen or heard of before; Starcrash. With a cover that featured a bikini clad beauty with a laser gun, something resembling a Cylon, David Hasselhoff holding a lightsaber and the tag line "Star Wars meets Barbarella in the ultimate inter-galactic adventure"; I had to have it!

The opening shot of the film did not disappoint, imagine the opening shot from the original Star Wars movie, the vastness of space with a great big space ship flying over your head and onto the screen leading to the big reveal of the ship and its scale, now imagine the exact same shot but this time with a ship made by Gerry Anderson, filmed on a shaky hand held camera filmed in front of a back-lit black screen with holes in to represent stars. If the thought of that appeals to you then Starcrash will be one of the more fun 90 minutes of your life.

Caroline Munro who is best known for her role as the helicopter pilot and the first woman ever killed by James Bond in The Spy Who Loved Me, plays the fantastically named Stella Star who is a smuggler and also the best pilot in the Galaxy. She is accompanied by her navigator Akron who has unexplained super powers and a robot called Elle who looks like a cross between Darth Vader, IG-88 and Bender from Futurama and sounds like Texas Pete from SuperTed.

Our heroes are sent on a mission by the Emperor of the Galaxy (Christopher Plummer) to find his son and destroy a secret weapon belonging to the evil Count Zarth Ahn. On their quest they encounter gun fights, sword fights, prison breaks, friendships, love, betrayal, giant killer robots, a floating city, a time stopping weapon and even  "Amazons on horseback".

Very little is explained in the film, its a case of accepting that things happen "because this is what happens in distant galaxies", like Akron's powers and what exactly is a Starcrash but my favorite unexplained moment is why Stella is sent to prison and forced into hard labour wearing a futuristic swimsuit whilst all other prisoners wear peasant clothing.

The soundtrack is by John Barry, and although it is far from his best work it does elevate some of these scenes and even manages to distract from the filmmakers odd insistence on making space so loud. According to the extra features on this DVD nearly all the actors were dubbed by other actors (except for The Hoff and Christopher Plummer) which goes some way to explaining the bad dubbing in some of the earlier scenes but for the most part you wouldn't know this.

Where does The Hoff come into all this? Well for the first hour he's nowhere to be seen but when he
does turn up (with a great unmasking reveal) he proves why he became such a big star in the first place, his hammy over the top acting fits Starcrash perfectly and the sight of The Hoff in a lightsaber battle with a stop motion robot is amazing.

Whilst I'm on the subject of stop motion animation, some of the robots in this film are exceptionally lifeless but it does lend a certain element of charm to the movie, after all this isn't a Hollywood blockbuster like Avatar or Star Trek, this is a late 70's Italian film made to cash in off the back of Star Wars.
Luigi Cozzi (billed as Lewis Coates on non Italian releases) clearly watched a lot of Barbarella, Flash Gordon and Star wars as part of a sci-fi crash course in preparation for this movie as elements of each make up the spine of this films look whilst the story itself is more akin to Jason and the Argonaughts or Sinbad in space.

Fans of cinematic errors can gleefully point out goof after goof, including night changing to day changing to night, pilots that can't count and non existent wardrobe continuity and I say let them, because I loved it and I'm sure I can't be alone.

Starcrash is camp, exciting, sexy, majorly flawed but thoroughly enjoyable. Starcrash is everything you could ask for in a sci-fi Z movie.

Rhys Thomas for The Bearded Trio (Originally posted in 2013.)