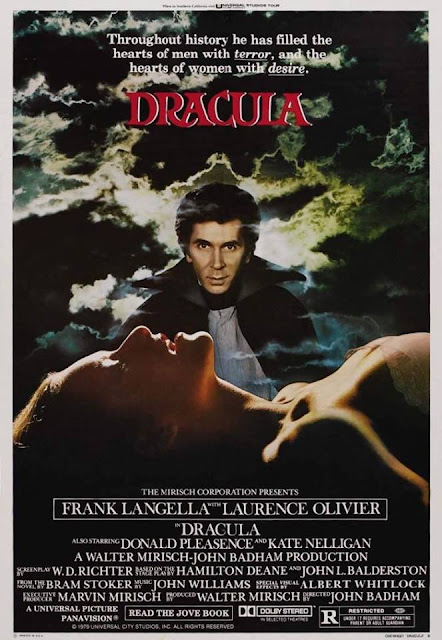 Guest Post By Douglas Meacham - A Retrospective Look At The 1979 Classic, Dracula

“I DESPISE WOMEN WITH NO LIFE IN THEM...NO BLOOD.” - Dracula

1979 was a bumper year for vampire movies with no less than five hitting the big screen that year.  The one that stood out was "Dracula" directed by John Badham.  Frank Langella takes on the role of the Count in this remake of the 1931 Lugosi film, based on the remake of the Broadway play. Langella portrays the character as a charming seductive Gothic romantic versus the mysteriously frightening take given by Bela Lugosi. Because of this, it’s the first time the Dracula tale is told as a tragic love story. Years later Francis Ford Coppola would take this concept and run with it in BRAM STOKER’S DRACULA.

Shot on location in England at Shepperton Studios and Black Park, Buckinghamshire.  The beautiful county of Cornwall was used to substitute Whitby in the story.  The mysterious Tintagel (for Seward's Asylum), and St Michael's Mount (for Carfax Abbey) were used for exterior shots. The Castle Dracula was a glass matte painted by Albert Whitlock.

John Williams’s score is one of his earlier underrated ones, buried under the blockbuster scores he was composing at the time including SUPERMAN and THE EMPIRE STRIKES BACK. He says in an interview that he was inspired by the tale of Tristan and Isolde, another tragic love story.
The sets in this version come in second place to Lugosi’s film in my opinion. I love how Dracula’s Castle was a stand in for Carfax Abbey.

This incarnation was my introduction to Dracula, and therefore defined to me who the character should be. It wouldn’t be until later that I saw the more popular horror versions and read the novel. I remember seeing this film on TV for the first time as a young child, and it quickly became one of the movies I was obsessed with. Now that I think about it, I owe my charming ways to Frank Langella.

Dracula was nominated for five Saturn awards including best actor, best director and best make up but ended up winning in the "Best Horror" category.  The movie, although not classed as a hit at the cinemas actually brought in a profit.  The budget for the movie was approx $12 million and brought in over $30 million in box office sales but was still seen as a disappointment by the studio.

Douglas Meacham
Douglas is a HUGE movie fan and has a very insightful movie group on Facebook called, Meacham's Movie Madness.  Douglas is also a Patreon of The Bearded Trio and a very valuable supporter of the site.