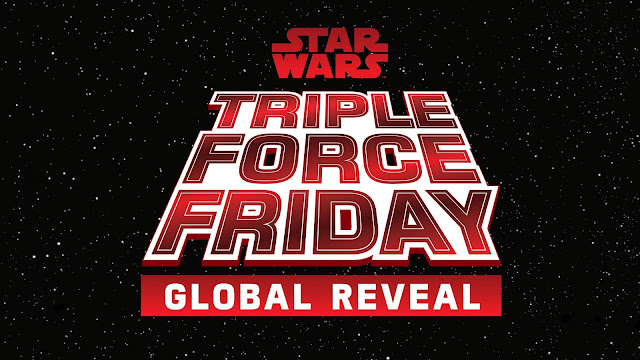 Fans Around the World Invited to Tune in to Epic Livestream from Pinewood Studios for First Look at New Products for “Star Wars: The Rise of Skywalker,” “The Mandalorian” and “Star Wars Jedi: Fallen Order”

There's a film coming out in December, you may have heard something about it?  Yes!  "Star Wars: The Rise of Skywalker" is released on 19th December in cinemas but if you can't wait until then, fear not because before the movie release we have a Triple Force Friday.  But wait!  If you can't wait for that then do not fret as there is going to be a whole weeks worth of build up for Triple Force Friday starting on the 26th September.

What will be happening I hear you ask?  What about a livestream from Pinewood Studios no less and where we will get to see hot off the press products for “Star Wars: The Rise of Skywalker,” “The Mandalorian” and  (the one I'm really excited about - Rob) “Star Wars Jedi: Fallen Order.”

This is no ordinary reveal either as stars from the movies will be on hand to do the revealing.  Expect to see Daisy Ridley, John Boyega, Pedro Pascal, Gina Carano and More to Reveal New Star Wars Products Ahead of the Global Launch.

Do you want to read the full press release?  Of course you do, the Force is with you!  We also have a teaser trailer to really whet your appetite.

On 26 September at 7 p.m. BST, fans around the world can tune in to the Star Wars YouTube page for a livestream event from Pinewood Studios in London where the upcoming theatrical release “Star Wars: The Rise of Skywalker” was filmed. Via live and recorded vignettes, an ensemble of veteran and new Star Wars talent will reveal new products that will roll out globally for Triple Force Friday on 4 October, inspired by a trio of upcoming original Star Wars releases:

Warwick Davis, a prolific actor who’s best known for his roles as ‘Wicket the Ewok’ in “Star Wars: Return of the Jedi” and as ‘Willow Ufgood’ in “Willow”, will host the livestream event at Pinewood Studios. In the U.S., fans and influencers will gather for a special viewing party at Lucasfilm’s headquarters in San Francisco.

As well as seeing new characters like ‘Zorii,’ ‘Jannah,’ ‘The Mandalorian,’ ‘Cal Kestis’ and the new droid ‘D-O’ in product form for the first time, fans will get their first look at the wide array of new products that bring the characters to life in new and unexpected ways, spanning toys, apparel and accessories, books, gaming, tech and home goods.

Force Friday is an anticipated event for Star Wars fans worldwide, commemorating merchandise introduced in advance of the episodic saga films. Past iterations, including a live unboxing event that rolled through 15 cities worldwide in 2015 and a global in-store digital scavenger hunt in 2017, brought out fans around the world who shared their experiences.

As always, fans are invited to join the conversation on social using Triple #ForceFriday, as well as to participate in real-world retail celebrations around the globe. Select retailers in major markets around the world will open at midnight on 4 October, featuring the new range of products from all three properties as well as a selection of limited-edition commemorative products.

Throughout the weekend, retailers including Smyths, The Entertainer, Sainsbury’s and Argos, will join in to celebrate Triple Force Friday.

As new plot points are revealed, additional products will continue to roll out leading up to the theatrical release and beyond. More details and updates about Triple Force Friday are available at StarWars.com.