Photo of the day is from from Raiders of the Lost Ark.  Meal time on set.

During filming in Tunisia, nearly everyone in the cast and crew got dysentery or food poisoning, except a wise Steven Spielberg. He insisted on only eating out of cans that were shipped in from England.

The famous scene where Indy confronts an Egyptian swordsman was improvised as a result of the food poisoning that was hitting the cast and crew.  Harrison Ford was unable to do long shots due his dodgy belly so apparently improvised the scene rather than endure a long fight.  Indy pulls out his sidearm and shoots the swordsman.  Harrison Ford also revealed years later at a 2011 screening that he felt there had already been a lot of scenes where you see Indy disarming bad guys with his whip so Ford suggested: "Why don't we just shoot the son of a bitch?" To shorten the scene, Ford and Spielberg agreed Indy should just pull out a pistol and shoot the man.  A relief for cast and crew no doubt. 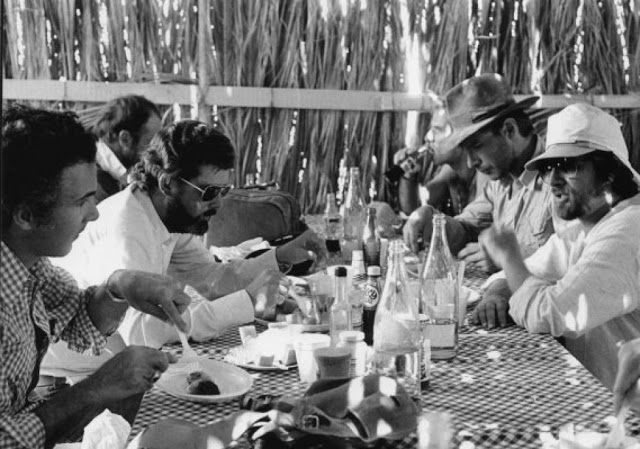