Explaining That "Weird" Cut In Poltergeist. Read The Missing Scene 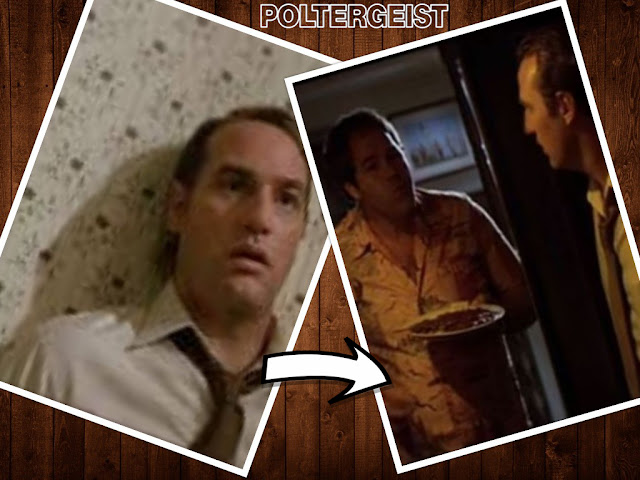 Why Is There A Strange Cut In The 1982 Horror Classic, Poltergeist?

If you're a fan of the 1982 Horror classic, Poltergeist then you will be very familiar with that "weird" cut in the movie.  It's 32 minutes and 47 seconds in to the movie and the scene is where Diane is explaining the strange phenomenon that is happening in the kitchen.  First, she shows to Steve a chair scraping across the floor all on its own then she does the same with Carol Anne.  Steve leans up against the kitchen wall and is completely shocked at what just happened.  It's at this point Diane starts to explain the sensation of being pulled and then...A very abrupt cut.  One moment we are listening to Diane and suddenly it cuts to Diane and Steve at their next door neighbours door.  Why the sudden cut?  It's on the VHS, DVD, Blu-Ray and even the streaming versions.  Why does this awful and weird cut exist in the movie, Poltergeist?  Watch the clip below to see the cut:


Well, the answer is to do with Pizza Hut.  You see, at the beginning of that scene mentioned above, Carol Ann appears and is promised a visit to Pizza Hut.

Later on in the scene Steve says "I hate Pizza Hut."  Well, the fast-food company got wind of this and were not happy with MGM.  This complaint was late in the day when it came to the movie's production.  In fact it had already gone to print so a quick solution was needed, hence the very rough and crude cut you see in the movie today that has been with us since the beginning.  Some fans of the movie even remember the cut at the premiere but some movie goers and fan of the movie swear they remember the complete scene.  Here is the missing scene in script form and if you do remember it, please let us know.


DIANE
You can't believe the feeling.

STEVE
What's the gag? There a magnet back there? He looks behind the door in the dining room. Nothing. Steve just stands for a long moment in hapless silence, then...

STEVE
I hate Pizza Hut! Where's supper? I don' t understand, Diane. What the hell's going on around here?

Steve sidesteps the chalk marks, removing himself from the active area.

DIANE
I figured I'd never explain it to you. So I showed you instead, but don't ask me how or what. Just help me figure out what to do.

STEVE
You mean there's no gimmick?

DIANE
Not from inside the house. Maybe Tuthill got himself a super remote from the Radio Shack.

Carol Anne adjusts her helmet and sits inside her launch circle. Diane and Steve are having the discussion across the room and aren't aware of her.

STEVE
Maybe the shakeup and this thing...relate.

CAROL ANNE
Daddy, look at me!!

They turn but it's too late. Carol Anne shoots across the room faster than before, and with no one to catch her.

At a sickening speed her helmet smashes into the wall. Diane SCREAMS Steve runs over. An eight-inch hole in the wall and the cracked plastic on the helmet testify to the force of impact. Carol Anne is dazed but unhurt.

The front door opens and Tuthill steps into the bug light. An obvious strain in this conversation.

The motives various, the feelings mutual. About a thousand mosquitoes chow down on the Freelings while they talk.

TUTHILL
TV's off in here. If your set's acting up again...
The Bearded Trio - The Site For Steven Spielberg, George Lucas, John Williams and a whole lot more.