Exploring Star Wars In The Depths Of Spotify 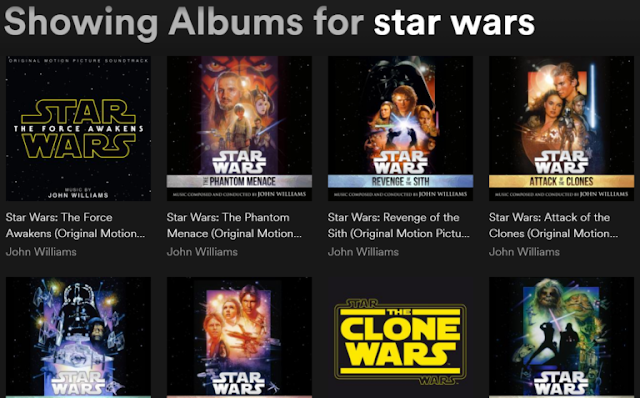 Is Spotify Your Holocron For Soundtracks?

If you’re a fan of Star Wars then it’s almost a certainty that you are also a fan of the soundtracks. If you look up perfection in the dictionary it mentions John Williams and the music to the Star Wars movies. Okay that was a lie but it should do.
For me, ever since that first viewing of Star Wars way back in 1977 I’ve craved the musical delights of John Williams and the scores to Star Wars have never been that far away in my life. From the humble beginnings of listening to Star Wars on a record player to cramming a whole album on a 256mb Creative Labs Muvo MP3 player. Now, we are lucky enough to have any music we like just a click away and streamed to any device at any time. 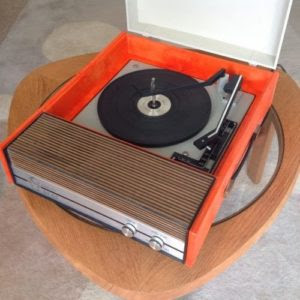 I'm a huge fan of Spotify and when it comes to soundtracks it's always a delight to find the hidden gems filed away in the music streaming service. If you’re a soundtrack fan like me then a music streaming service is a must but I do recommend caution if you are to start using these services but more of that later. Below are just some of the Star Wars gems you can find on Spotify, some obvious and some I would like to think are hidden gems waiting to be discovered. Also, I’ve made a convenient playlist for all the pieces mentioned for you to listen to at the end.
The first choice or choices I should say are of course the original and best soundtracks from John Williams. They are all there, well sort of. If you type Star Wars into the search engine and then select ‘albums’ you should see all the movie soundtracks and as an extra bonus, mixed in among John Williams is the excellent Kevin Kiner and the soundtrack to The Clone Wars.
I say sort of because these are of course not the complete editions of the soundtracks, instead the re-releases from the beginning of the year that only have certain tracks from each movie. Which brings up that caution I mentioned above. If you are to start using a music streaming service then don’t be tempted to let go of your personal collection. Your favourite albums may be on Spotify or another music streaming service but tomorrow they may have disappeared. You see the music is only on these platforms as long as the provider has the licence. Think of them like Netflix. Movies and TV shows are only available for limited time. Now admittedly some music will stay on the platforms for years but there’s no guarantee they will always be there. That’s why having the original CD, Vinyl or digital download is still an essential option in this day and age. A few months ago the expanded editions of the Star Wars soundtracks were on Spotify, but when Disney took over the rights to those soundtracks from Sony they unfortunately disappeared.  Many Star Wars fans complained that there faithful playlists were now showing greyed out track listings that they can no longer play.
Anyway to still have all these albums on demand is still impressive and I’ve selected a few of my favourite tracks from the movies and TV shows. The first has to be from A New Hope and it’s one of my all-time favourites, ‘Princess Leia’s Theme.’ This slow, relaxing piece is a perfect piece to accompany the image of an innocent princess from the 1977 classic and more poignant now with the sad loss of Carrie Fisher last year.
Another track to add to the list is ‘Ben’s Death and TIE Fighter Attack.’ This one brings back memories of my childhood for two reasons. This particular track I would play quite often while I played with my Palitoy Star Wars figures. The slow build-up of anticipation which then releases to this all-out attack is something I could easily incorporate with my Star Wars figures and the huge Millennium Falcon I had as the centre piece. The other reason is this music was played while I played the classic PC game from Lucasarts, X-Wing. 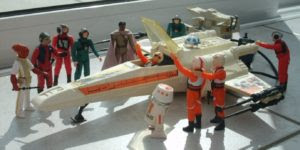 Jumping to The Phantom Menace now and this one track for me seems to have all the elements of the movie in one piece. Another masterpiece from John Williams, it’s ‘The Droid Invasion and The Appearance of Darth Maul.’ This one piece of music will tell take you on a Star Wars journey and all in five minutes and 14 seconds.
I mentioned that the soundtrack to The Clone Wars was represented on Spotify and I have to add one particular track to the list. That is the wonderful piece called ‘Ahsoka Leaves.’ From The Clone Wars season five. It still gives me goose bumps thinking of that final scene and shows how powerful and important The Clone Wars has become in the Star Warsuniverse. Kudos to Kevin Kiner for producing such a powerful and moving piece of music and continuing that trend with Star Wars Rebels. For that reason I’ve also added ‘It’s Over Now’ from Season two of Star Wars Rebels.
As you can see there is a huge selection but I want to move away from the original soundtracks and take a look at the alternative versions that are in abundance. I’ve chosen a select few that I believe show off the diversity of choice starting with an 8-bit rendition of Jar Jar’s Introduction from The Phantom Menace. It’s only 58 seconds long but it reminds me of a classic Lucasarts point n’ click adventure with the SCUMM interface. A quirky piece that will put a smile on your face. In fact the world of video games is well represented with the soundtracks from Shadows of the Empire and renditions from The Old Republic, as well as other games being in the library.
Finding albums that you’ve not listened or come across for years is one of the delights of subscribing to a music streaming service and my next choice is a piece from an album that I played to death when I was a kid. It’s Geoff Love and his Orchestra and the name of the album is simply ‘Star Wars and other Space Themes.’ Geoff Love was famous for ‘disco-fying’ popular theme tunes and soundtracks and of course Star Wars was no exception. I’ve already mentioned Princess Leia’s Theme but now listen to the disco version. His albums and music style bring back so many memories and coupled with the glorious artwork on the covers, they were never far away from my record player. 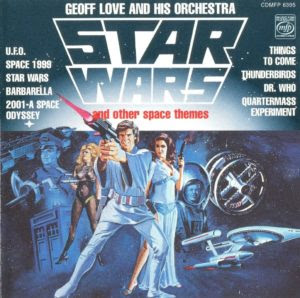 Fans of RebelForce Radio will of course be familiar with the Meco disco version of Star Warsand will be pleased to know the album is also on Spotify. I can almost hear Jimmy Mac’s voice over The Cantina Band disco music.
Discovering Star Wars fan renditions is something I frequently like to do and thankfully they are on Spotify. The popular and hugely talented Taylor Davis is represented and her Star Wars Medley is something that all fans of Star Wars should listen to. Her talents on the violin are exceptional and I have no hesitation adding her piece to the playlist. Another fan rendition I must add is from String Player Gamer and is another violin piece, this time it’s The Victory Celebration. I certainly recommend looking him up on Youtube. His video to accompany this piece is impressive. Most impressive.
I’ve only scratched the surface when it comes to the amount of Star Wars content on Spotify. I could easily write another two or three articles on hidden gems in the vaults of the music streaming service. In fact if you have any recommendations and would like me to put together another playlist then please let me know.
One last thing before I go and this is a little Star Wars Easter egg hidden in Spotify. If you type in THX1138 in the search bar then you will see your time progress bar change into a Lightsaber. Clicking on it will change it from blue to green and red. A nice little feature.

As promised I have created a playlist on Spotify with all the tracks mentioned above and a few more additional pieces. I hope you enjoy the playlist and don’t forget to let me know of any pieces you think should be included in a future article.
My blog post was originally posted on Fantha Tracks in 2017