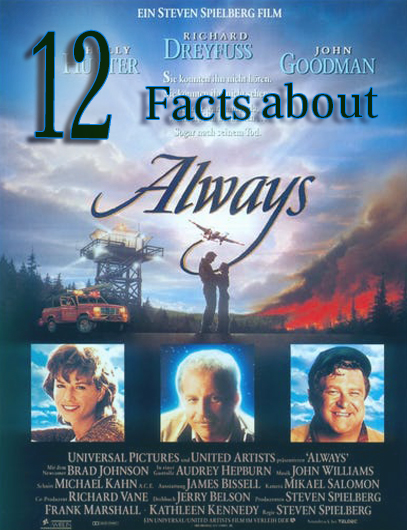 Steven Spielberg's "Always" celebrates its 30th birthday this year and to celebrate we bring you 12 facts about the movie which starred Richard Dreyfuss, Holly Hunter, Brad Johnson, John Goodman and Audrey Hepburn to name a few.

This was Audrey Hepburn's final film before her death on January 20, 1993 at the age of 63. She accepted the role of Hap because she wanted to work with Steven Spielberg.


Hepburn was paid $1 million for her performance in the film and she donated it to the charity, UNICEF.

If Sean Connery had been available then we probably wouldn't have had Audrey Hepburn in the movie.  Steven Spielberg originally wanted the Scottish actor to play the role of Hap but he was unavailable.  Spielberg ultimately decided that Hap should be a woman instead.

Steven Spielberg wanted to cast either Paul Newman or Robert Redford in the leading roles, one as Pete Sandich and the other as Ted Baker. However, both men wanted to play Pete and Spielberg was unable to work it out between them.


During filming, Steven Spielberg told John Goodman that you would make an excellent Fred Flintstone.  Five years later Goodman was cast as the character in the live action movie.


Tom Cruise was offered the role of Ted Baker but turned it down.  Brad Johnson ultimately got the part.


Always is a remake of the 1943 romantic drama "A Guy Named Joe" set during World War II.  Steven Spielberg joked with Richard Dreyfuss while filming Jaws in 1974 that the "classic" should be remade.  Spielberg even had the movie playing on a TV in one scene of Poltergeist of which he was the producer.


Steven Spielberg has said that the movie "A Guy Named Joe" which starred Spencer Tracey actually was one of those movies that inspired him to be a director having watched it numerous times as a kid.  Richard Dreyfuss also claimed he had watched the movie 35 times.

Talking of the Blu Ray, at the end of the credits on the Blu-Ray there is a warning, "Caution: Inhaling of helium from balloons is dangerous, and can cause serious injury or death."

The estimated budget for the movie was $33 million.  According to Box Office Mojo it made $74 million from domestic and worldwide sales.

Critics are split on the movie with some giving it a poor review.  Top movie critic, Roger Ebert said "the result is a curiosity: a remake that wasn't remade enough." while other critics gave it a more favourable review.  Clint Morris calls it "a touching, beautifully short romance."  Rotten Tomatoes has it sitting at around 60% for critics and the audience.  Spielberg fans including myself will tell you Always is a sleeper hit with typical Spielberg sentimental feels.

If you want to read more about Steven Spielberg's Always, we have a wonderful guest post from Fran Del Pizzo who looks at the movie in detail 30 years after it was released.  Click here to read the post.