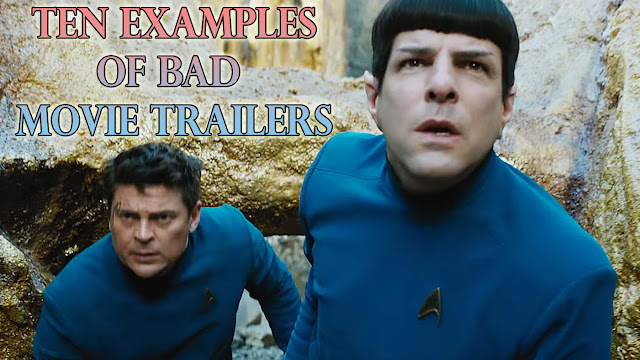 I take a look at 10 examples of bad movie trailers.

The marketing of a movie is perhaps one of the most important parts of selling a movie.  If done well then the anticipation will go through the roof.  Take Star Wars The Force Awakens for example.  Each trailer released for The Force Awakens quickly hit the 50 million+ mark within days on YouTube and fans watched each one multiple times.  Reaction videos were made showing how fans felt the first time they witnessed the Millennium Falcon flying across their screen.  However if a movie trailer is done badly then it's like the front end of a car losing control, it's hard to correct once it starts sliding
A bad trailer for a movie is, most of the time a sign that the movie studio doesn't actually know what they have on their hands and no idea how to promote it.  Here are a few examples of bad trailers.
Star Trek Beyond
The first trailer for the latest Star Trek movie did not go down well with Star Trek fans.  The trailer felt like the producers were trying hard at distancing themselves from the franchise it was attached to.  Beastie Boys music pumped out while Captain Kirk was seen doing jumps on a conventional motorcycle.  The trailer looked more like a Guardians of the Galaxy sequel than a Trek movie.  Fans made their voice heard and the second trailer rectified most of the mistakes made in the first outing.
A.I. Artificial Intelligence
Steven Spielberg's 2001 tale of a boy who wanted to be human and be with his mother is a modern day take on a Pinocchio fairy tale.  However the early trailers didn't do the movie justice and movie goers had no idea what the movie was going to be about.  Even Steven Spielberg himself said he didn't like the trailers and could have been promoted better.
Star Wars
It's hard to think that one of the most successful movie franchises ever had a shaky start with a movie trailer which showed quite obviously that the studios had no idea what they had on their hands.  The 1976 trailer was slow and pretty unexciting as the Star Wars logo gradually moved closer to the screen mixed with scenes from the movie all be it with the original soundtrack and unfinished special effects.  The voice over tries his best to explain what the movie is about but you get the distinct feeling the studio had no idea what this space film was all about.
Braveheart
Even by the time Braveheart had come out the use of a low gritty voice in trailers was quickly becoming a cheesy addition and no longer fitted the modern day movie.  However it didn't stop the makers of this epic movie about Scottish hero, William Wallace from using one of the cheesiest voiceovers that really didn't fit the movie.  The movie trailer also used clips that really doesn't do the movie justice and ultimately gives the wrong impression about the Mel Gibson classic
The Abyss
Unfortunately a lot of fans of this James Cameron classic blame the first trailer for the lack luster performance at the box office.  Taking just over $50 million in the US, it performed lower than expectations.  The trailer shows nothing of the action in the movie and the wonderful special effects.  Instead a voice over and underwhelming underwater scenes don't exactly leave you mouth watering.
What Lies Beneath
If The Abyss didn't reveal enough in the trailer, What Lies Beneath takes us to the other end of the scale and really should have a major spoiler alert at the beginning of the trailer.  It  goes beyond building mere intrigue and actually gives away so much of the film that we feel that we don't even need to see it.
Spoiler Alert


Eternal Sunshine of the Spotless Mind
It starts off well with an intriguing infomercial tempting you with the ability of complete erasure of troubling memories such as a bad relationship breakup.  But then then the trailer completely shifts to trying to convince you that this is a run of the mill rom-com starring Jim Carrey.  The movie is most definitely not.
Minority Report
Steven Spielberg's take on a story by Philip K. Dick in 2002 turned out to be very popular with movie goers and thankfully ignored the dreadful trailer that was used to promote the movie starring Tom Cruise.  The trailer is disjointed, badly edited and, with so many of the trailers in this article doesn't really explain what the movie is about.  Instead we are left with the impression that Minority Report is cheap looking and kind of a cheesy.
Wall-E
Sometimes you have to wonder why movie studios don't adopt the "if it's not broke don't fix it" mentality.  That was definitely the case with Wall-E.  The American trailer promotes Pixar's classic, Wall-E perfectly.  It captures all the elements of this wonderful movie perfectly and leaves you smiling.  However, Walt Disney Studios thought it would be a good idea to release a different trailer in the UK with a horrible voiceover, music that didn't fit the scenes and left you thinking this movie was really a dumb comedy about a crazy messed-up robot.
Ghostbusters (2016)
The original 1984 classic movie starring Dan Aykroyd, Bill Murray and Harold Ramis has become a huge classic and took the world by storm.  It is a movie that many movie goers will say is in their top ten and quite rightly too.  Unfortunately the new movie had so much hate thrown at it even before it's been released.  Featuring an all new cast the trailers did nothing to put out the hate flames.  With lousy jokes and scenes heavy on the CGI, the trailer doesn't sell the movie, in fact it does the opposite.
Have we missed any trailers you think should be included in this list?  Let us know below or on our Facebook page.