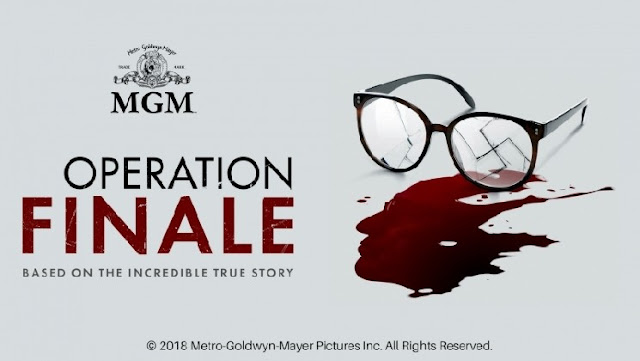 Obersturmbannführer Adolf Eichmann, one of the major organizers of Holocaust,  facilitated and managed the logistics involved in the mass deportation of Jews to ghettos and extermination camps  in Nazi-occupied Eastern Europe during the second World War. he was also one of the highest ranking Nazis to escape judgement at the Nuremberg trials, where various SS officers, including Auschwitz commandant Rudolf Höss, divulged damning evidence about Eichmann.

Operation Finale dramatizes the story of Peter Malkin (Oscar Isaac) and the rest of the Mossad team tasked with apprehending Eichman in Buenos Aires in 1960, and bringing him back to stand trial in Israel.

The story follows Malkin, whose family fled to Palestine  to escape the rising tide of German anti-Semitism. Peter's sister, Fruma, and her three children remained behind with 150 other relatives, and died in the Holocaust. The memory of Fruma and the tragedy of her death has haunted Peter throughout his life, and lead him to join Mossad. When a tip comes from German living in Argentina that his daughter Sylvia is dating a boy named Klaus Eichmann (Joe Alwyn), an investigation quickly leads to the identification of one Ricardo Klement (Ben Kingsley) as Adolf Eichmann.

Given Argetina's history of turning down extradition requests for Nazi criminals, so rather than filing a possibly futile request for extradition, Israeli Prime Minister David Ben-Gurion makes made the decision that Eichmann should be captured  instead. Malkin and a team of agents, lead by Rafi Eitan (Nick Kroll, who may very well be best known to audiences as "The Douche" on Parks and Recreation) head out to Argentina, with a mission to capture Eichmann.

The film does not directly credit Malkin's riveting memoir, Eichmann in My Hands as source material  (a previous film based directly on the book was made in 1996 starring Arliss Howard and Robert Duvall), but it follows failry closely to his account of the events. But the filmmakers can't resist taking liberties to heighten the drama, the biggest one being making the team's doctor (Inglourious Basterds' Mélanie Laurent) a woman in order to tack on an entirely fictional romantic interest for Malkin, though Laurent gives a fine performance and the relationship is used more to show a vulnerable side to Malkin rather than add too much intrusive melodrama. It also portrays the mission as a bit more imperilled than most accounts indicate, though much of it is rooted in truth, just heightened for dramatic effect.

Isaac, one of Hollywood's most versatile actors, has played the lead before, but this is first time as a true leading man, and it demonstrates the true difference between that and the designation of "character actor." While the rather silly term doesn't every actor play a character) is usually attributed to supporting players who are don't posses movie star looks, it can just as easily apply to someone like Oscar Isaac who has never been famous enough to need to bring a certain established persona to his films. Now that he's potentially the Harrison Ford-like breakout star of the latest Star Wars trilogy, he is forced to find that persona and use to sell films like this one. He still gives a strong performance, but it comes with a baggage he's never had to deal with in previous leading roles such as Inside Llewyn Davis or the hugely underrated A Most Violent Year. 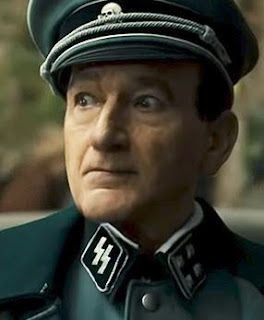 And speaking of baggage, casting Ben Kingsley, whose soft spoken Itzhak Stern was the performance was the emotional core that audiences were able to follow through Schindler's List as Eichmann was huge gamble. Fortunately, the legendary actor is up to the challenge, and if anything the connection to the best narrative film every made on the Holocaust simply allows Kingsley to  portray the dichotomy between Klement and Eichmann; the man who sits in the window with his young son watching trains go by, versus the monster who stood looking down on trenches full of women and children as they were gunned down. The only thing that isn't convincing about Kingsely's Eichmann is the digital make-up used in flashback sequences, which manages to be too much and little at the same time, and sadly lessons the impact of those sequences. But it's still a great performance, and Kingsely deserves to be getting more buzz for it. Joe Alwyn (Billy Lynn's Long Halftime Walk) is quite effective as youg Klaus Eichmann, as is Haley Lu Richardson his secretly Jewish love interest. In fact, the underlying sadness of the way the identities, let alone the relationships, of these two young people are dictated by the horrific prejudices they are born into is compelling enough that it's almost a shame it can't get more screen time.

Director Weitz, whose career has truly run the gamut from great to terrible (About a Boy, In Good Company and the screenplay for Rogue One on one side, New Moon and The Golden Compass on the other) ably handles the suspense, aided by a terrific score from Alexandre Desplat. He's a talented filmmaker when he sticks with more subtle and grounded material, and while he may not have made  Operation Finale into a geniuinely great film, he's made it a very good one. it's a big step back in the right direction for him as a director, and we look forward to see what the future holds for him.