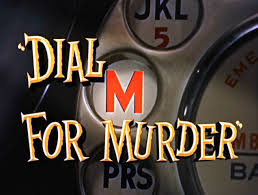 Alfred Hitchcock's decade-spanning career involved many top composers, resulting in some of the finest film music composed for the cinema. Many recordings of the earlier works haven't survived, making it impossible to enjoy them outside of their films. Intrada is embarking on a mission to record some of these scores, and you are instrumental in making this happen.

The initial recording is composer Dimitri Tiomkin's final collaboration with Alfred Hitchcock, the 1954 thriller Dial M for Murder. Intrada chose this title because of Tiomkin's striking score. It accentuates an elegant thriller and features the knock-out star power of Ray Milland, Robert Cummings, John Williams and Grace Kelly (her first of four productions with Hitchcock, and whose introduction to the director was facilitated by Tiomkin).

Your support for this recording not only helps make this recording possible, but encourages future campaigns for a series of recordings that could include Shadow of a Doubt, Strangers on a Train, Suspicion, The Man Who Knew Too Much and many many more possibilities. And that's just Hitchcock! With your continued support there is no limit to what we could do — Jungle Book, The Haunting, Joan of Arc, Face of a Fugitive, Black Patch — who knows where this can lead us. Each project is expensive and time intensive to put together, and we need your help to make this and future titles available. The cost of undertaking a reconstruction and new recording are too high to recuperate their costs through the normal way of doing business.

For this release, Intrada has engaged the highly esteemed William T. Stromberg, who previously created a stunning recording of Tiomkin's Red River. Stromberg previously recorded many scores for the Marco Polo label, including early works by Max Steiner and Hans Salter, and then with his own label, Tribute, that boasted recordings of Bernard Herrmann including Mysterious Island and Battle of Neretva. Stromberg knows classic film scores and knows first hand the complexity and nuances of Tiomkin's work, enabling him to deliver a stellar recording of Dial M for Murder.

Intrada itself has been involved in many restoration and recording projects, including three with the prestigious Sinfonia of London — Miklós Rózsa's Ivanhoe and Julius Caesar, and Bernard Herrmann's Jason and the Argonauts, not to mention later albums of Rozsa's brilliant Red House and Spellbound, recorded in Scotland and Bratislava respectively.

The score will be assembled with the assistance of Tiomkin expert Patrick Russ and the composer's own publishing company and recorded with the Slovak National Symphony Orchestra in the Slovak Radio Concert Hall.

Lets help Intrada on this journey to start recording some classic scores to legendary Alfred Hitchcock films. They can't make it without your support!

To participate in the campaign, please visit:
Dial M for Murder Kickstarter Campaign
The Bearded Trio - The Site For Steven Spielberg, George Lucas, John Williams and a whole lot more.