Movie Review: "Spy Who Dumped Me" is a Waste of Talent 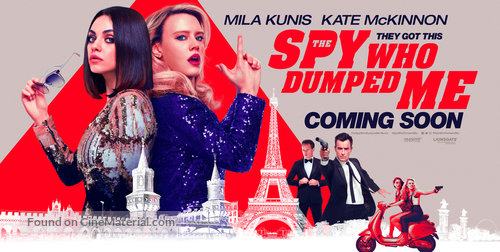 Hollywood's latest attempt to answer a question that no one ever asked (in this case "What if  John Wick was more like Laverne and Shirley?") is also the latest sad example of the film industry's total lack of any ideas as to how to utilize the immense talent of Kate McKinnon.

Not counting a cameo in Finding Dory, McKinnon's best film to date would have to be Ghostbusters, and despite my undying defense of the feminist cause and my disdain for the misogynistic trolls, I still feel that it played more like a mediocre anniversary television special than an actual movie.  McKinnon has the goofy charisma of Lucille Ball, the manic energy of Jim Carrey, and a more impressive range of characters than any other SNL cast member since Eddie Murphy.  So why is so hard to put her in a movie that is genuinely funny and satisfying?

We'll come back to that question. The Spy who Dumped Me follows Audrey (Mila Kunis) and her best friend Morgan (McKinnon) as they find themselves embroiled in a major international conspiracy. The set up: Audrey has been dating Drew (Justin Theoroux), a charming man with whom she felt instant chemistry, for a few weeks when he suddenly breaks things off in a text message (the cad.). Drew unexpectedly re-enters her life with a team of assassins on his trail and reveals that he is actually a CIA agent, and he needs Audrey to complete a time sensitive secret mission for him.


The charming stars are more than game for an action comedy, giving it everything they've got, and they are just barely enough to make the film watchable. Kunis is a capable leading lady (I'm a genuine fan, having even enjoyed her in Book of Eli and Oz The Great and Powerful), but Audrey is not very well fleshed out as a character, and Kunis struggles to make her interesting. On the flipside, Morgan is far too quirky ("Mom, did you get the dick pics I sent you?"), with her ardent feminism being her most successful and endearing quality. Still, it often  feels like McKinnon doing an impression of McKinnon, and that's dangerous territory for an ator. It doesn't help at all that the script is letting them down at every turn. The espionage plot is as generic as they come, and as much as it seems like a worn out cliche to even bother saying this, most of the humor is made of F-bombs and vulgar sexual and scatological references rather than any wit. But I want to be clear that I loved Deadpool 2, and I enjoyed Tag despite its many flaws. It's not a matter of wanting inoffensive material, it's a matter of wanting comedy that isn't so damned lazy.  And even worse is director Susanna Fogel's desire to treat this as a demo reel to prove that she can do action: she  handles the Bournographic chase and fight scenes well enough, but she completely loses site of the fact that you're either doing light, breezy comedy or you're constantly shooting people in the head at point blank range. And while I'm all for innovation, no film class I ever took ever taught the principle "Before you through the bady guy out the window, cut to a close up of his penis", and I'd have to say that reason for omitting that little gem was pretty well validated in this film.


The supporting cast is wasted, with only Theroux (who does a good job with the action) and the extended cameos by the great Paul Reiser and Jane Curtain as Morgan's parents making any kind of an impression. Outlander's Sam Heughan is campaigning to be the next James Bond, but based on this work here it's more like James Bland. Meanwhile, Ivanna Sakhno (Pacific Rim: Uprising) is really emerging as one of 2018's most overused yet underutilized up and coming actresses. Someone, please write this young woman a character! Her crazed former gymnast turned assassin killer is painfully underdeveloped, feeling too vaguely tragic to be funny but too hammy to be menacing in any way.

The sad truth is that modern cinematic comedy is so stale and devoid of worth that the only way for McKinnon to truly become a movie star is too do what Robin Williams and Jim Carrey eventually did and surprise us with an impressive dramatic turn, and I have no doubt that she'll be glorious in whatever film gets the distinction of using her in such a leading role. Until then, we can only look forward to SNL in the fall if we want to see her appear in anything that's actually funny.