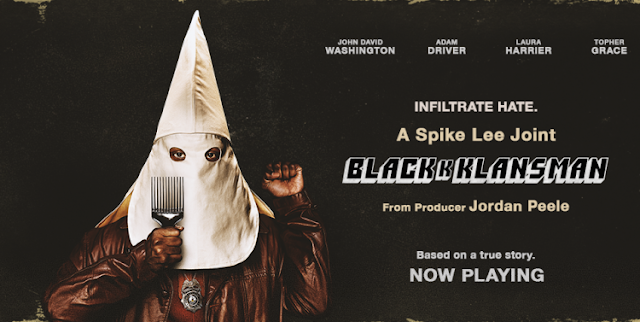 We're a little late in reviewing this one due to a brief hiatus, but we couldn't possibly let it go by without giving our strongest recommendation.

In 1972, Ron Stallworth (John David Washington) is hired as the first black detective in the Colorado Springs  police department. Stallworth is initially assigned to work in the records room, where he faces mistreatment from his coworkers. Stallworth requests to transfer to go undercover, and is assigned to a local rally by national civil rights leader, Kwame Ture (Corey Hawkins of 24: Legacy and Kong: Skull Island), who has taken the name of African leaders.

After the rally, Stallworth is reassigned to the intelligence division. While reading the paper, he finds an advertisement to join the Ku Klux Klan. Stallworth calls and pretends to be a white man, and speaks with Walter Breachway, the president of the Colorado Springs chapter. Stallworth recruits his Jewish coworker, Flip Zimmerman (Adam Driver), to act as him in order to meet the Ku Klux Klan members in person. Zimmerman attends a meeting and meets Walter, along with other members of the Klan. Before long, Stallworth ends up on the phone with the National Chairman, David Duke (Topher Grace), and thing get really interesting.  As things get more serious, Flip (a non practicing Jew) starts to share Ron's emotional involvement in the case, and it becomes something of a crusade for the two men.


Do The Right Thing! and Malcolm X established Spike Lee as a unique (and angry) voice in Hollywood in the 90's, but that voice has been growing quieter and more restrained over the decades. But not anymore: his extraordinary talent is in full form here, as is his passionate message, which has never been more disturbingly relevant. When we were younger, we would see films such as Schindler's List, Amistad, or even Mississippi Burning and be emotionally torn apart, but there was always a certain naive ability to go to sleep with the belief that "things aren't like that anymore." Frankly, that was never true: the events of Hotel Rwanda were taking place at the height of the attention Schindler's List was getting and the same world leaders who demanded we see Spielberg's masterpiece were turning a blind eye to third world atrocities. But with BlackkKlansman, Lee has made a searing and powerful film that smacks you in the face with just how scary things are right now, in our own backyard, and our leaders are a big part of the problem. The choice to release the film on the first anniversary of Charlottesville is no accident, but it's no crass gimmick. It's a much needed wake up call.


As a leading man, John David Washington has both the advantage and handicap of reminding one so much of his legendary father (and frequent Spike Lee collaborator) Denzel Washington. The fact that he doesn't have quite as commanding a presence is no slight against him, because frankly no one does. But the younger Washington proves to a serious talent deserving of his own accolades, and promises a bright future, a rising Michael Douglas to Denzel's Kirk. Ironically, given some of his vociferousness in the past, the most promising Oscar contender performances come from white actors, specifically Drive and Grace. A great supporting characters is made to make a huge impression, and both of these men absolutely nail their performances, with Grace finally finding the vehicle to allow him to put Spider-Man 3 in the past (it doesn't hurt that Tom Hardy will likely inherit the "you ruined Venom mantle very soon.).

This is a great film the truest sense of the term, and while the cast, script and the excellent cinematography by Chayse Irvin all deserve major kudos, it's a director's picture all the way. Lee tones done some of his most frenzied tendencies, but his signature shots are still there, and they've never worked better (what we like to call the "Segway shot" is expertly employed to make Ron and his girlfriend look like blacksploitation heroes as they brandish guns walking down a hallway.). This film is a labor of love, albiet an angry one, and it comes from a true artist at his most inspired level. While the element of Driver's character Judaism is an invention of the film, and not part of the true story, it's more than a strong dramatic choice. It's essential one in order to fully convey the message of the film's ending, and it shows a growth and maturity from Lee in wanting to make sure that aspect of the klan's insidious agenda is given as much attention as their hatred on black people.

Whether or not the Academy choses to give BlackkKlansman its due, you should. Go see this film. Take your kids to see it, if they are 12 or over, and above all else, talk about it.