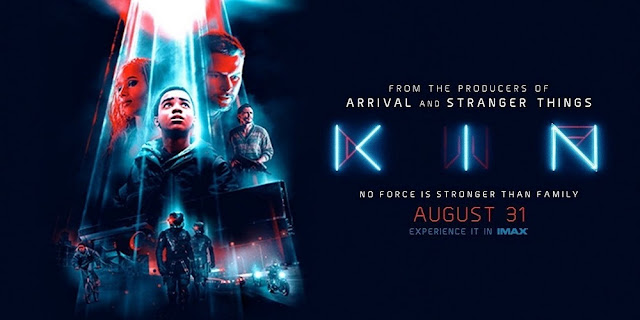 If you've seen the trailers for Kin, you may have detected a bit of an '80's Amblin vibe. We certainly did, and the prominent mention of Stranger Things on the advertising only adds to that expectation.

The story follows a young boy, Eli (Myles Truitt) who lives alone with his adoptive father (Dennis Quaid.). Eli likes to scrounge for scrap metal, and one fateful day he scores his biggest find yet when he climbs a fence and finds a bunch of dead bikers who look like they are going to a costume party with a "What We Thought The Future Would Look in the early '80's" theme. He also finds what appears to some sort of strange hybrid between a giant sized staple gun and a laser tag cannon, complete with holographic sights. Naturally, he tells no one.

Meanwhile, Eli's newly paroled adoptive older brother, Jimmy (Jack Reynor) shows up out of nowhere, recalling the biblical tale of the Prodigal Son who returns to a constipated Dennis Quaid who is trying out some sort of accent. It seems that Jimmy owes some bad people money, and if they don't get it, the whole family is in danger. Meanwhile. some mysterious figures who were apparently also invited to that costume party are in pursuit.


Kin is an expansion of a short film called Bag Man that directors Jonathan and Josh Baker had made previously, and it very plays like a short foolishly stretched out to feature length. The very thin (yet convoluted) premise and it's overtly derivative elements that lead up to a truly idiotic conclusion may have played as an "at least it was watchable' student film, but as a summer release it doesn't cut the mustard, even in an extraordinarily weak August. The directors have no particular sense of visual style, and at the risk of sounding mean, when they try to pass off a wrack focus from a chain link fence to a house (thereby effectively making the links of the fence disappear, the same way literally every film student does when they first start experience with the lens) as money shot, it's starkly obvious that this is a first feature. But it's only fair to point out that, while they lack any visual flair, there is an obvious enthusiam emanating from them and that feeling seems to have infected members of the cast.


Truitt and Reynor are quite likable and have a chemistry that is the film's only significant saving grace, making you care just enough about their underwritten characters to become marginally invested. But James Franco as the villainous loan shark is less successful. Before the film, we were discussing with another critic whether this would b  actor James Franco, or paycheck James Franco, but the controversial star throws a curve ball and gives us Spring Breakers James Franco: the character is a wildly hammy, scenery chomping laugh out loud white trash gangsta that belongs in a really bad David Spade comedy called Trailer Park Godfather, but you get the distinct feeling that Franco thinks he has an outside shot at an Oscar nod. Quaid is under utitlized, Kravtiz is given an eye rolling "what does this character have to do with anything?"role as an exotic dancer that the boys meet at a strip club that is so G-rated that you can picture Jesse and the Rippers hanging out there on the weekends, and when Carrie Coon finally shows up, she is forced to choke out the line: "Morgan Hunter, F.B.I.!"


But perhaps the biggest problems with Kin are the When Movies Collide appraoch to storytelling and the wrold class achievents in the field of creating plot holes. The movie has a deliberate and self conscious sense of pride at the attempt at grittiness, featuring plenty of violence, profanity, forced speechifying about the harsh realities of life the sense of dismal regret about bad life choices that hangs over it throughout the mercifully short 1 hour, 42 minute run time. And yet it seems to constantly questioning where the line is, watering down the harshness at the same time it piles it on, and periodically remembering that "Oh, yeah, this is supposed to be a kiddie sci-fi movie." The plot holes are so egregious that we are literally going to do a spoiler warning follow up review sometime next week, focusing entirely on dissecting that horrible mess. We'll only say here that the justification behind them is that it's attempting to be mind bending, but in order to mind bending there has be a certain level on which it all makes sense and connects. Kin misses that level entirely, and in the end it's just plain stupid.

In fact, Kin is remarkably dumb all around, and avoids the accusation of insulting the intelligence of it's audience only by leaving you with the embarrassing but unmistakable feeling that the filmmakers actually think it's clever (the directing duo is self aware enough to include a visual reference to the franchise they are most blatantly ripping off, as if to say "no, this is an homage."). In an age when so many films are going straight to Video On Demand, the only thing more puzzling than the fact that this wound up in theaters is that is got funded at all. It may sound like very faint, praise, but it's important to be clear that this is not a total ordeal to sit through: it's a Mystery Science Theater 3000 movie, but it's more comparable to Rising with Death than to The Incredibly Strange Creatures Who Stopped Living and Became Mixed Up Zombies.