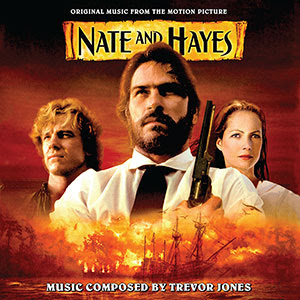 Intrada presents an absolute gem this week, a dramatically expanded edition of Trevor Jones’ magnificent, sweeping score for for the 1983 Paramount film Nate and Hayes. Throughout film history, there has been a wealth of great and legendary film scores for swashbucklers, pirate adventures and other dramas set upon the sea, and Nate and Hayes has a solid place among them. The well-produced, previous issue necessitated a heavily truncated 40-minute program, presenting only half the score. This new Intrada 2-CD presentation offers all the music Jones recorded in London. Since the score’s running time is just short of 80 minutes (not including alternates and additional music from the sessions), this presentation features the full film score on CD 1 and presents all the extra material on a second, shorter “bonus” CD.  Jones’ score for Nate and Hayes is an intoxicating blend of adventure, romance and skullduggery. Painted on a vast canvas it is held together structurally by a number of recurring themes subtly varied by the composer throughout the film. For those who admire his score to The Dark Crystal, Nate and Hayes scored just one year later shares many of the same sensibilities of the earlier score, making them excellent companions.

In the film, Captain Bully Hayes (Tommy Lee Jones) is illegally selling arms to South Pacific islanders when the deal goes bad and he and his men must fight off a tribe of female warriors. Hayes escapes, but falls into the hands of his erstwhile friend—but now archenemy— Ben Pease (Max Phipps). Awaiting execution in a Spanish prison, Hayes tells his story to an intrepid reporter, starting with Hayes transporting a spunky English girl, Sophie (Jenny Seagrove) and Nate Williamson (Michael O’Keefe), to a remote island where they are to be married by Nate’s missionary uncle. Pease and his crew interrupt the ceremony, murdering the uncle, kidnapping Sophie and carrying the natives off to slavery.  Nate and Hayes (both of whom are now in love with Sophie) arrive in the nick of time and rescue her. 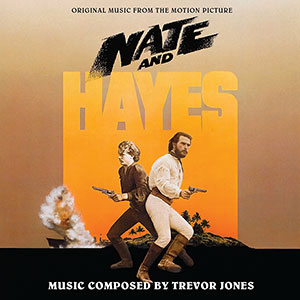