The Bearded Trio - An Update. The Reason I've Distanced Myself 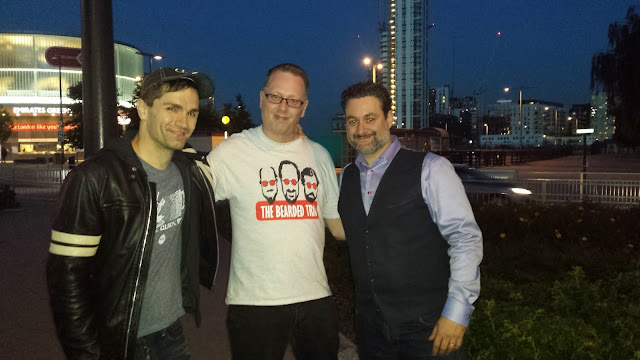 The reason for my absence

Last month, I made the hard decision to shut down The Bearded Trio website and walk away from all blogging duties.  Well, we're still here...Sort of.  We obviously haven't closed down but you may have noticed that the posts have reduced.  We no longer post daily but instead it's a case of if and when.  I was convinced to keep the site going for reference, after all there is almost ten years of material to look back on.  Some of it, I hope you will find useful and interesting.  Also, we still have the excellent Brother Gibbs doing their movie reviews and I'll even post from time to time.

Actually, I've been enjoying the break away from the everyday maintenance of the site and been focusing more on our sister site, Geek Universal which I strongly suggest you check out (Nice plug there.)

Now, some people have contacted me and asked why I decided to walk away and up to now I've kept it quiet.  The reason I kept it under wraps was I didn't want to make it seem like I was climbing on the bandwagon with all the negativity out there with various fandoms and in particular, Star Wars.  When I first started the site it was to celebrate the works of George Lucas, Steven Spielberg and John Williams.  I wanted a way to say thank you to the three for giving me and many others so many movie memories.  But over the years I've seen a shift in the primary voices that I come across.  Instead of a choir of celebration I would more and more come across negative comments, thoughts, messages and in some cases pure hatred.  Direct messages to me via various means full of hate and personal attacks just because I liked the Prequels or don't object to the changes that George Lucas made to the Star Wars movies were becoming too frequent and was washing away the enjoyment I was getting from running this site.  In the last year I've seen a seismic shift in that unfortunate trend.

Now, I will admit that in the last year my passion for movies in general has dwindled.  I've put it down to my age perhaps.  I no longer get excited over an imminent movie release but instead just go through the whole experience by the numbers, so to speak.  So, coupling that with what seems a more lean towards negativity from the fan community I made the decision to walk away.  It was a hard decision as I am proud of this site.  We've managed to keep a personal touch and the interaction with our loyal readers and the real fans genuinely make me happy.  That's why the social media pages are still going and will continue to.  However, it does feel that without having the daily commitment and having to keep my ears to the ground over every little bit of news, I can kind of keep a safe distance.  I don't have to be involved in the latest news story doing the rounds such as someone being forced off Instagram due to angry fans.  Really?

Hopefully, the current downward trend is temporary and the positive vibe will return some day.  You may argue that I should ride the storm and in a way I am doing that by keeping the site and social media pages alive but think of it as I've checked out to the storm shelter in the basement and will hopefully pop my head up once I feel the noise has died down.

Thanks for visiting and for your support.