Movie Review: "Teen Titans Go! To The Movies" is a Cheap "Deadpool" for Kids 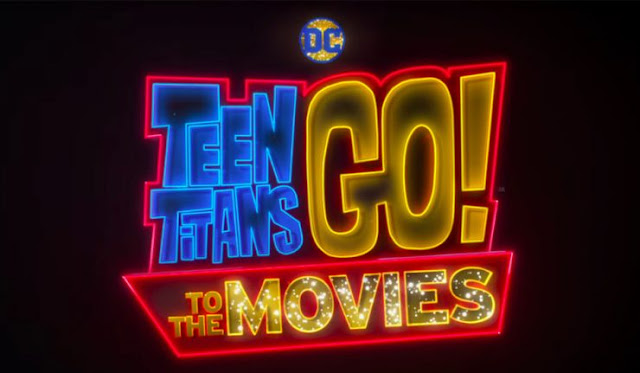 There are few kiddie cartoon shows that are more fiercely divisive among grown up audiences than Teen Titans Go! Some few it as a tragic sellout version of the popular version of Teen Titans that came before it, and others see it as a gloriously silly pop culture spoff full of sly wit that knows not to take itself too seriously but provides plenty of fun for all. While personally, I'm a Young Justice guy who never really got into either show, I can't help but feel that those who praise the genius of this version really need to watch more Phineas and Ferb.

For those of you who actually have a life, the Teen Titans here are: Robin (Scott Menville), Raven (Tara Strong), Starfire (Hynden Walch), Beast Boy (Greg Cipes), and Cyborg (Khary Payton). The movie centers around Robin's desperate quest to get his own superhero movie, just like Batman, Superman and seemingly every other DC hero have. The Titans show up to the premiere of Batman Again to discover that they aren't even on the guest list, and are forced to sneak in.


The Titans are not taken seriously to the rest of the superhero world, considered a joke if they are acknowledged at all. But Robin is determined to change that, and together with friends he hatches a plan.

The approach here is much like Deadpool, with the Muppet-style fourth walling breaking and the line between the comic book world and the world of comic books movies practically nonexistent.
Series creators Aaron Horvath and Michael Jelenic really know their DC (arguably better than Zack Snyder does), and aren't afraid to poke fun at it. There are some very clever references, including the presence of Nicolas Cage as the voice of Superman, and one laugh out laugh funny (if irreverent) bit about the night of Batman's fateful origin. Unfortunately, they are also not afraid to devote as much of the movie as they possibly can to lowest common denominator poop jokes (one sequence seems to go on forever.). The movie is frenetic throughout and frequently obnoxious. What's more, the funniest bits really only play to die hard DC fans.

Cage and Will Arnett, who plays the villain (identified only as "Slade", aka Slade Wilson, more commonly know in the comics as Deathstroke) are amusing enough, as is Patton Oswalt as the Atom, and all of the voice actors do solid work. There's a lot of energy to the proceedings, and when it's on target, there is definitely some fun to be had. But unless you're a child or a very immature adult who knows the minutae behind these characters, you're likely to be lost and rolling your eyes most of the time.