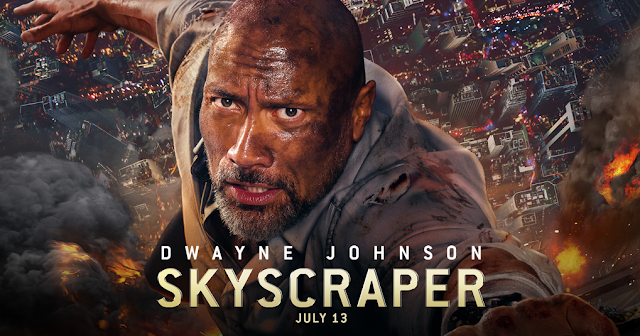 
A few years ago a study was released which said that cats can understand simple logic and have a basic grasp of the laws of physics. This puts them ahead of Rawson Marshall Thurber, writer and director of the new action movie Skyscraper. Dwayne Johnson joins the long list of action stars who have tried to step into Bruce Willis' shoes, and in fairness, he did take them off so he could make fists with his toes. If he's not gonna wear them . . .

But where the premise of Die Hard as a genre for over three decades has been for imitators to try to top each other with more and more off the wall settings (airports, aircraft carries, hockey stadiums, a city bus and Air Force One, to name just a few) Skyscraper comes full circle and brings us back to the original setting: namely, a high rise building. On top of that, it directly mixes Die Hard with The Towering Inferno, in what writer/director Thurber clearly sees as an homage. But Skyscraper is an excruciating reminder that no matter how much you love the source material, you can't turn a ripoff into an homage just by calling it one.

Johnson plays Will Sawyer, a former FBI agent turned security expert, and the movie starts off on a rather depressing (and dark) note with a sequence that sets up Will losing his leg and lets us know right away that this is the kind of movie where children being put in mortal danger by deranged adults is just supposed to be something that we accept as fun. We then flash forward a few years and Will is married to Carla Gugino, played by former Scream and Wild Things star Neve Campbell. They have two children (the boy is a frog and the girl is a pig) and Will is handling security for the world's tallest building, known as "The Pearl" because of a large spherical structure at the top that makes the skyscraper look like the tallest, most oddly shaped golf tee in history. It houses several floors that function as their own society, and despite the risks highlighted by Sawyer, who is the building's head of security, his bosses insist that it is impenetrable. True to Sawyer's belief, the building comes under attack by terrorists who start a fire (because why not start off your evening by setting fire to the building you're inside? ) while Will's family is trapped in there as well, forcing him to take action. Matters are complicated further when he finds himself framed for the attack.

If you're going to this film hoping for a more real world action picture in the age of the superhero movie, you will be extremely disappointed. Skyscraper is an outrageous, over the top cartoon from beginning to end, but it's both missing the intensity of a late '80's or early '90's dark and violent action film and the light, tongue in cheek sense of fun one usually associates with a Dwayne Johnson film. It's an incredibly awkward 1 hour and 40 minute mash up of  the aforementioned films, with a bit of Star Trek (there is the inescapable feeling that in the first draft of the screenplay the sphere was a full on holodeck), The Red Green Show (manliness can be measured in lengths of duct tape) and eventually, Scooby Doo.

Johnson works well enough most of the way, though he struggles a bit through the opening section. The film establishes Sawyer as suffering from PTSD caused the incident wherein he lost his leg, but doesn't want to go deeply enough into run the risk of actually making the character interesting. And Johnson being big enough to have his own climate is both a strength and weakness as an action star. It makes him credible when he's beating the snot out of people, but there comes a point when having to lug around that much muscle mass can be a liability. And we're pretty sure that point comes right about when when you're climbing 97 stories up a crane on a false leg so you can jump across to hang off of a building.

Meanwhile, Campbell and Thurber are trying so hard to avoid making her character seem like a weak and fearful damsel in distress that she ends up seeming vaguely disinterested. She says "My husband a children are up in that burning building, and I'm not waiting one more damn minute" in the exact same tone most people would use to say "I specifically ordered this WITHOUT tomatoes."

Thurber the director does a decent job with the action, and he's aided by a great cinematographer and strong editors. But he's stuck with the enormous drag factor of his own asinine script, which only allows the movie to go so far. Dwayne Johnson has developed into an engaging and likable movie star, but his chief appeal is his self-aware sense of humor, which is almost entirely missing here. If he's going to last he has to start working with better directors and making better movies. Other than the delightful Moana and the highly entertaining Jumanji: Welcome to the Jungle, he's mostly making instantly forgettable flicks that are unworthy of his charisma. If you must see this, we recommend you see it on discount night. Don't wait for video, because you'll want just to turn it off and pop in Die Hard.