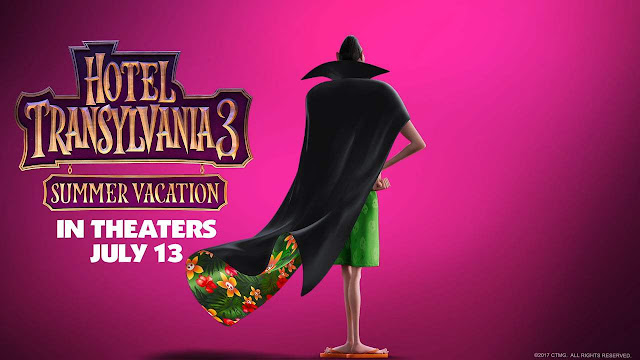 
I'll start out with the obvious:  Incredibles 2 didn't exactly make things easy for the next big animated movie caught in its wake, and it's probably best that the movie that followed was in a franchise that is cute enough, but very definitely a kid franchise as opposed to a family one (some may disagree with this designation, but most who do probably haven't faced that Adam Sandler's live action movies are strictly for 12-year olds of all ages.).

Hotel Transylvania 3: Summer Vacation  begins in 1897, where it shows monsters disguised as humans on a train to Budapest. Abraham Van Helsing (voiced by Jim Gaffigan), a vampire hunter, boards the train and unveils the monsters. The monsters try to escape by climbing to the roof of the train, with Van Helsing giving chase. After Dracula (Sandler) pushes them off the train, he seemingly defeats Van Helsing.


In the present day, a few months after the events of the previous film, Dracula's hotel business is running smoothly, but is feeling lonely and starts toying with the idea of getting back into the dating scene. But daughter, Mavis (voiced by Selena Gomez) mistakes Drac's loneliness for burnout, and announces they will be going on a cruise so he can get a vacation from giving vacations. The next day Dracula, Mavis, Johnny and the rest of their family boards a cruise ship called the Legacy. Everyone has fun on board and Dracula accidentally bumps into the ship's captain, Ericka (voiced by Kathryn Hahn of Bad Moms and Parks and Recreation), who is a human. Drac feels an instant "zing" (the monster equivalent of love at first site, or "Personal Revelation" for any Mormons in the audience.)


The Hotel Transylvania franchise hardly represents the best of what's out there in animation, but it is arguably above average for Adam Sandler (excluding his occasional forays out of his Happy Madison label and into actual films, such as Punch Drunk Love and The Meyerwitiz Stories.).  It's cute and colorful with some animation,and director Genndy Tartakovsky has nice visual flair. But it's essentially a one joke series (or more accurately, a series of endlessly repeated gags based on the monster premise.). The good news is that this one mostly stays away from the poo poo pee humor, but the bad news is that there really isn't a single big laugh to be had for anyone over the age of 8 (plenty smirky half smiles, but no big laughs.). This is made all the more frustrating by the fact that the Van Helsing storyline is actually quite a good idea, and it's practically begging to be the basis for a better film.

Still, this is a movie to take the kids to, and it's one that you can do so comfortably and know that they will have fun,it has a positive enough message about love, family and self discovery,  and for the most part you find it to be a mildly diverting 97 minutes. One can only hope that the upcoming Addams Family animated movie captures the subversive sense of humor that the material longs for and doesn't simply result in us having two versions of this franchise to have to sit through.