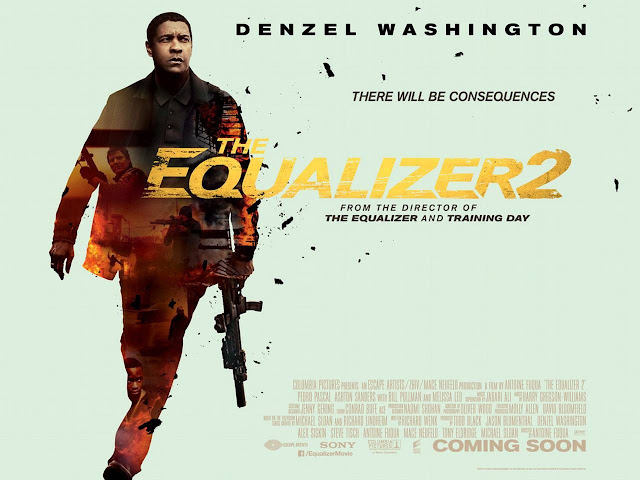 
There has been a lot of hype regarding the fact that The Equalizer 2 is Denzel Washington's first sequel (conveniently ignoring the fact that the first one is arguably the only movie in his career that really lends itself to one. Glory, Philadelphia, Cry Freedom, Fences and even Crimson Tide weren't exactly franchise builders.).

A few years after the events of the 2014 film, Robert McCall (Washington) now lives in a diverse apartment complex in urban Massachusetts, working as a Lyft driver and helping the less fortunate with the help from his old friend, Susan Plummer (Melissa Leo) who is still a highly placed official in the government agency McCall worked for in his previous life (the one where he was white and played by Edward Woodward.). He is still looking out for the little people, ranging from a Holocaust survivor (Orson Bean) who is looking for his sister who was separated from him while being sorted out to different camps, to which McCall asks Susan to help locate any information on her, to Miles Whittaker (Ashton Sanders), a young resident with incredible artistic talent but a  troubled background. One day, Susan was called to investigate an apparent murder-suicide in Brussels along with CIA operative Dave York (Pedro Pascal), McCall's former teammate. After the investigation, they return to their hotel where (SPOILER ALERT) Susan encounters assailants and is killed (which is revealed in the trailers.). McCall is not about to let his this one go, as Susan and her husband (Bill Pullman) are literally his only close, trusted friends (no one else knows the truth about both his past and his present.) He must do whatever it takes to find out who killed Susan, even if that means coming out of the cold and contacting to his old partner.


We went into the first film as casual fans of the series, who were hardcore Denzelots but had mixed feeling about Antoine Fuqua, finding him a very inconsistent director who films ranged from solid to genuinely awful. But the movie made us believers in Fuqua as a slick and very talented filmmaker  with a sense of vision and style. The original was a harshly and often shockingly violent melodrama thriller with an almost Scorsese-like feel, and the commitment to making each character count on some level really wowed us. In retrospect, it's probably not quite as good as we gave it credit for at the time, but when you see the vast majority of the movies that are released each year, any major studio release that manages to be a genuine surprise is cause for praise.

More than anything, the second film suffers from being a sequel and as such lacking the ability to provide that sense of surprise. It's also a bit predictable in some places and takes its time before really pulling you into the suspense, but when it does, it's edge of your seat stuff, and the slow pacing of the first half pays off by creating enough of a feeling of every day mundane life to really make you care what happens to the peripheral characters.

The opening  sequence on board a train headed to Turkey is a bit too vague as to when it takes place (some reviewers seem to take it as a flashback to McCall's agency days, but we took it as likely a direct answer to the question of whose email McCall was answering at the end of the last film.). Either way, it's one of the weaker major set pieces, feeling a bit too international in scope and clashing with the rest of McCall's life, but also largely rehashing one of the best sequences in the original. But a terrific fight sequences inside a movie car and the finally, deliciously (and more than a little cheesily) atmospheric finale are among the best of Fuqua's career.  The villain here is  quite interesting, and certainly less over the top than mad Russian of the first film, but not nearly as fun to watch McCall toy with.

There's nothing particularly original here, and the violence in these films is very understandably going to be too much for some people (Washington sells it for us, never playing it with a sense of glee, but rather a quiet, sad acceptance that this who he is and he does what he has to do.). Whether this is worth your time really comes down to how much you liked the first film. If you're on the fence, you probably want to skip this one. But it delivers plenty for fans, and we wouldn't mind a trilogy if they came up with a strong wrap up story.