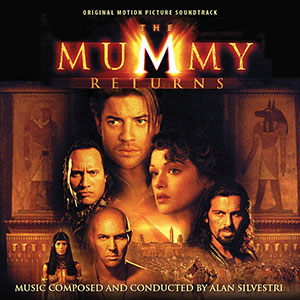 It’s one of the best-sounding recordings of any film I’ve ever done...the energy and the power in the recording of that score—it’s still one of my favorite recordings of a score I’ve done. – Alan Silvestri 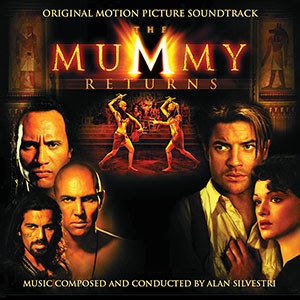 For Universal Studios' sequel to The Mummy, composer Alan Silvestri took the reigns and composed one of the largest epic scores of his career. He describes the score for The Mummy Returns as "Errol Flynn" – a score filled with swashbuckle, honor, adventure, damsels, just like an old pirate movie. The score features a snarling brass idea for the bad guys, a mystery motif on English horn for the Scorpion King, and a general sense of Egyptian mystique and ancient secrecy. Silvestri carries this exoticism into his love theme for Rick and Evy, a romantic melody that suggestively sizzles with the desert adventures and sexual chemistry. All this performed by a 100-piece orchestra and 60-voice choir.

To present this expanded edition of The Mummy Returns, Intrada accessed all the scoring sessions held in London with the composer conducting the Sinfonia of London Orchestra and Chorus in March 2001, courtesy of Universal Pictures and the Universal Music Group. The finished film featured approximately 110 minutes of music. Silvestri also recorded another half hour of changes—including alternate pickups and revisions for the changing editorial needs of the picture as well as some re-scored bars intended for the album—bringing everything captured at those London sessions to some 140 minutes. Not a single cue representing the climactic action sequences or finale (about 25 minutes of music) was included on the original Decca release. The album master was due for delivery prior to final mixing; consequently, those cues were not available for that album assembly. All this impressive music premieres on this new edition. Intrada presents the score as intended for the film on CD 1 and the first part of CD 2 (including the vocal), with the alternate takes on the second half of CD 2.

In the film, Evy is experiencing visions of her past life as a princess and sister of a murderous minx (Patricia Velasquez), Imhotep’s lover. The mean priest’s mummy has been revived once again, this time by an Egyptian cult, and he seeks a charmed bracelet in Rick and Evy’s possession to take command of the Scorpion King’s undead army. Former pro wrestler Dwayne “The Rock” Johnson made his major film debut as the Scorpion King—a role he would foreground in a 2002 spinoff named for his character.