Movies: "The Incredibles 2" Is The Rare Sequel That Waits To Get It Right 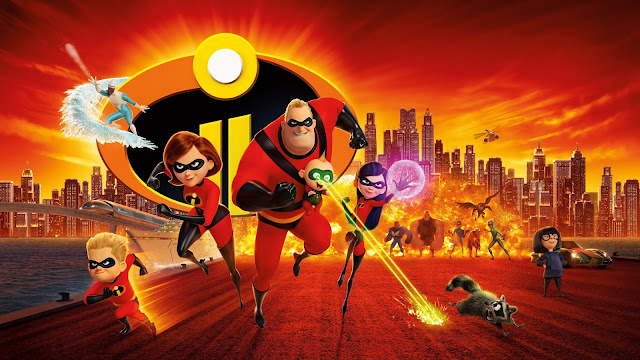 We were frankly terrified when The Incredibles 2 was announced. After slamming Disney for making Bambi II and getting on a high horse about a new standard of quality, John Lasseter was quick to turn Pixar into a sequel machine, and the likes of Cars 2 and Monsters University were cute and fun, but there is a lot of cute and fun animation out there. For us, The Incredibles ranks up there with The Dark Knight trilogy among the best superhero films of all time, and being wholly original (as opposed to a product that was destined to be rebooted eventually anyway), it was a perfect film that  ran the very real risk of being tainted. So we've awaited the new chapter wit bated breath.

The story begins where the first film left off, as The Parr family (aka The Incredibles) and Frozone  battle the Underminer as the latter attempts to rob Metroville Bank. The Underminer flees in his drilling vehicle, but the Incredibles stop him before he destroys City Hall. Despite this, the authorities are more concerned with the level of damage caused by the debacle. Agent Rick Dicker informs the Parr family that his department in the Super Relocation program is being shut down, and as a result, supers are once again forced to permanently adhere to their secret identities.

Sometime later, a telecommunications tycoon named Winston Deavor (voice of Bob Odenkirk) of DEVTECH contact Lucius and the Parr family, declaring that he wants the Super Relocation Program revoked as much as they do. He has a plan to bring supers back, and that plan has Helen/Elastigirl taking the lead, leaving Bob at home to take care of the kids, taking the opposite approach from Michael Keaton by becoming Mr, Mom after his career as a superhero.

Needless to say, there's more going on here than meets the eye, and the plot is full of intrigue. But more importantly, it's full of the rich characterizations, hilarious and insightful comedy and poignant family drama that made the first film a classic. It also features action scenes that are even more spectacular (a must after the high standard set by Marvel in the arena of thrilling, over the top superhero action.).

Writer/director doesn't miss a step, making a sequel that perfectly compliments the original and leaves us desperate for a third, while also feeling that if it ended here, it would be ending on a high note (a win/win that no other sequel this year has achieved.). While the villains here are not as memorable as Jason Lee's Syndrome, and there is a certain amount of predictability to that plot element, that's to be expected of a sequel, and in fact if you place too much emphasis on a new villain in superhero sequel that often leads to a loss of focus.


The cast is all more than game, bringing everything they've got to this, with Hunter and Nelson bringing even more out of these great characters, and Sarah Vowell wonderfully playing Voilet's growth while she is "Having adolescence".) Jackson  is great, of course, and Odenkirk and Keener give terrific performances by not trying to be cartoon voices but instead just playing it the same as they would if it were a live action film. But of course, the standout character here is Jack Jack,  and his with Bob and with Edna Mode (once again voiced by Brad Bird) and others is laugh out loud, fall out of your chair and wheeze until you start coughing up blood hilarious. If we could choose any dream superhero team up to get their own movie, it would be Jack Jack and Baby Groot.

The Incredibles 2 is definitely the sequel that all other will have to match this year, and likely none of them quite will.  It's the kind of movie that leaves you feeling like the world is a better place just because it exists.