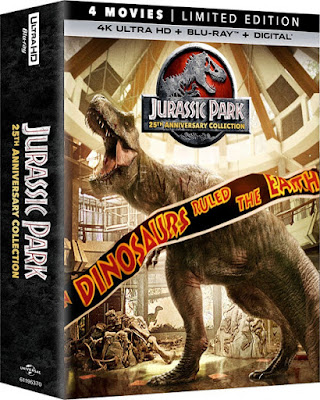 It was Christmas `94 when Jurassic Park made its home video release debut. I can still remember coming home from school and holding the special fossil case VHS edition of Jurassic Park, knowing that the movie that changed my life was inside. I must have watched that tape over a hundred times. In 2000, both Jurassic Park and The Lost World were released on DVD. We could finally experience these movies without all the hiss and other anomalies that plagued VHS tapes.

In 2011, all three movies were released on Blu-ray, but there was always something that bothered me about the transfers, particularly Jurassic Park; the warm, earthy colours of Isla Nublar were suddenly lacking. In 2013 the 3D edition was released but the general complaint was the overuse of DNR which removed some of the grain, thus robbing the picture of some finer detail. This was a shame as i loved the colours of the 3D version but something still wasn`t right. Earlier in the year when all four movies were announced for 4K with a statement telling us that the transfer would be sourced from the original film elements i could not have been more excited.

Yesterday I received my order and couldn`t wait to watch it and last night I sat and experienced possibly the best quality version I’ve seen of Jurassic Park since 1993. The HDR really allows the colours to pop and suddenly the cold steel look of the Blu-rays had gone and instead we get an incredible warm, earthy quality.

I`m a huge fan of movies shot on film and one of the things I appreciate that HD movies has given us is a chance to experience film grain which was lost on standard DVD`s. It`s great to be able to appreciate the different film stocks used on films in different periods of filmmaking. Jurassic Park had a few scenes on Blu-ray that seemed overly noisy and I was never sure if this was the natural grain of the film or just down to the dated transfer that Universal put out. The good news is, the 4K transfer retains the natural film grain without it becoming noisy or obtrusive. Universal has done an incredible job with their 4K catalogue titles; Apollo 13 and Gladiator being two fine examples of what going back to the original elements and giving us new transfers can do as oppose to a lot of their Blu-ray releases which were just HD upgrades of the DVD transfers.

As for the other movies, The Lost World gets a boost from the HDR. The sandy terrain and blue skies of the round up scene and the dense jungle sequences look better than ever. The T-Rex CGI during the San Diego sequence looks amazing and has not aged a day since `97. Jurassic Park 3 is the weakest of the original trilogy yet every time I watch it I’m amazed at how much I enjoy it and the small moments that stick with me. Again the picture quality is very impressive. The river boat attack being a highlight. The CGI has never been as impressive as the other movies, yet it looks good here as it shows off the new look Raptors rather well. Jurassic World was an impressive looking Blu-ray but gets an extra kick here thanks to the HDR.

So if you`re a Jurassic Park fan should you get this boxset? I would say yes, definitely. All four movies get a huge upgrade from their 1080p versions but it`s Jurassic Park that’s made the most impact on me. It was everything I was hoping for from this release. I can honestly say that this is the ultimate way to experience the movie at home. If you`ve been thinking of upgrading to 4K, let this release persuade you. I`ve been watching 4K for nearly a year now and no release has disappointed me. With only five Spielberg titles currently available I’m hoping for more to be announced soon. Jaws in 4K anyone? Bring it on!